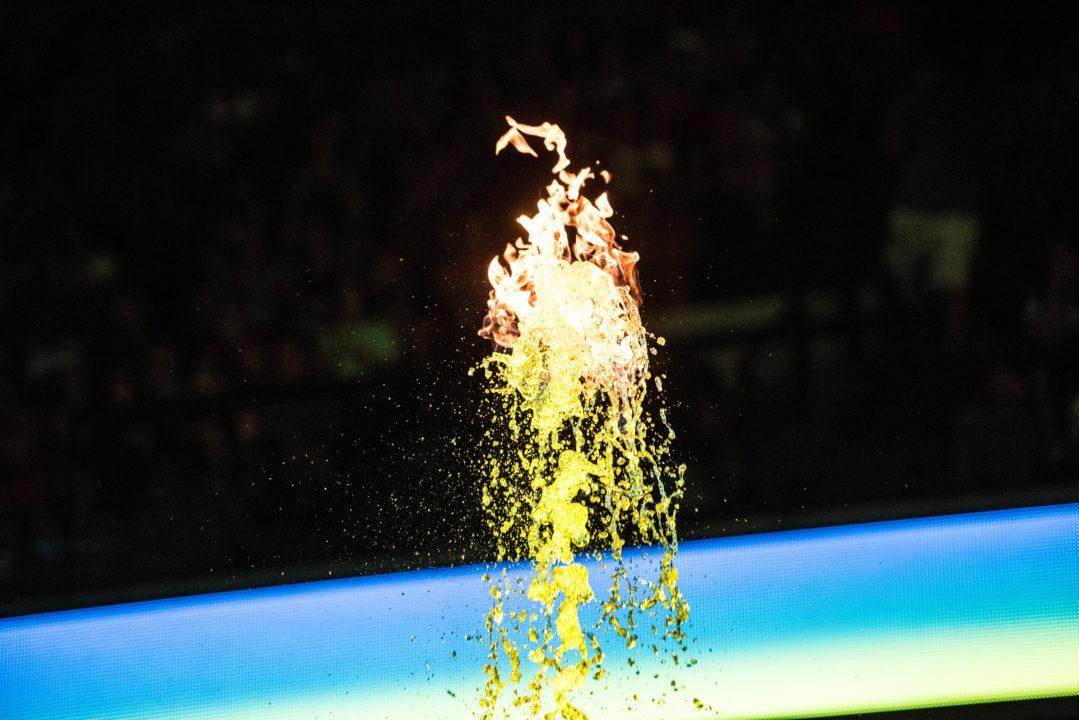 Welcome to SwimSwam’s feature, called simply SwimSwam Discussion. We might rename it at a later point in time (Hospitality Room, anybody?), but for now that’s what we’ll call it. In this series, we’ll take a question about swimming, usually geared toward the more hardcore of our nerds, and pose it to our audience. These questions will be based on real-life conversations SwimSwam staff has had with real-life swim fans, usually coaches, and we will invite our audience to discuss the subject in the comments section.

Please note: these discussions will be held to a higher standard of civility because of their constructive nature. If you’re not typically a constructive commenter, plan to be moderated.

Today’s discussion comes from a conversation I had with a top-25, NCAA coach via text message.

All of a sudden, college swimming in 2017 has exploded. The pre-Olympic 2016 year was fast, but there’s been no post-Olympic hangover like many expected – the improvements have accelerated.

Conference record books are almost unrecognizable after the last few weeks. The pace of acceleration of those records is not explained by the historical improvement curves we’ve seen. Every level of college swimming has gotten faster – Division 2, Division 3, NAIA – and most noticeably, Division 1 swimming.

The impact has been seen in both genders, but at the Division 1 levels, when simply comparing cut-lines for NCAAs, it’s been the most outlandish.

So, if we all accept that the improvement curve in NCAA swimming has accelerated, what is driving it? Is it a fluke season that will see a correction at some point? Is rest and recovery technology evolving that quickly? Here’s some theories, generated mostly by anecdotal conversation and hypothetical thoughts:

We’re curious to hear what you think. Do any of the above suggestions hold water? Do you have any other hypothetical suggestions? What research needs to be done to capture these improvement curves and disseminate the causes more widely?

Thanks for writing this! The thing that I so frequently look to is the 2008 “phelps effect” in youth swimming. I have absolutely no data but my gut tells me that there was a lot more youth swimming after 2008. If you started swimming in 2008 and were 10 years old you are now 19 years old (give or take on the month you were born) this is the typical age of a college freshman. If you start swimming earlier and recognizing a talent earlier in life you will be able to cultivate that talent and make better all around swimming in America.

Just to add to this: Tim Duncan was said to be a pretty good swimmer at 14. He was 6 feet tall at the time and I think I read that he was 4:10 in the 400 LCM. Kris Humphries had a national age group record at 10 years old. What if these guys had stuck with the sport? What could a 6’10” athlete of Tim Duncan’s caliber go in the 400?

Phelps theory. Can be seen with how much faster 15-18 year old swimming is now as well.

In addition to the Phelps theory, I think that post Olympic years ought to be faster anyway. Everyone at the NCAA level spent last summer doing a crazy amount of work in preparation for OTs. Even those that didn’t make it got a real good look at what that hard work can do, both in their swimming, and seeing guys like Dressel, Held, Haas, etc making it after their freshman and sophomore years of college. That work is also banked for the future, and a lot of swimmers come into the year with a larger aerobic base from the summer LCM training than usual, and can focus on the speed and underwaters. Larger aerobic base and larger motivation.

Agreed, the Phelps effect. Phelp’s success has brought tremendous publicity to the sport and encouraged many more youth to take up swimming.
Also, the addition of more sprints (50s, 200 relays) has encouraged more folks to get started and stay with it, with some eventual working their way up to longer distances.
The growth of opportunities for women has also drawn in more boys – parents with multiple kids like a sport where all their kids can go to the same practices and meets.
And last but not least, the “jammer style suits” have taken away they stigma that drove many, particularly young boys, away because they disliked the skimpy speedos.

It seems really trivial for all of us serious swimmers, but that’s actually a great point about the jammer suits! How many boys in the 10-13 yr old range have avoided swimming b/c they didn’t want to wear a “speedo” (briefs)? That’s no longer an issue.

There are three factors not mentioned above that may be important:

1) The year of really good pre-Olympic training is paying dividends in the next year;
2) There were a decent number of swimmers who redshirted the Olympic year (okay not too many to account for this effect, but it probably has a small effect on a few cut lines)
3) Swimmers who were Olympic hopefuls really did not focus on peaking in SCY, especially not pre-NCAAs. I think this is a really important one.

Along with the Phelps theory, maybe it’s more that club/age-group swimming has moved more towards race-based training rather than just grinding out 10k+ workouts, thereby keeping more swimmers in the sport longer and leading to less burnout and injury, therefore, allowing “better” overall athletes to flourish in college swimming

This is a great topic- those who invest the time in the sport need to have this discussion and similar ones. We learn from each other and from our experiences.

I’ll add a new thought: I think the club/hs coaching has improved a ton in the last 10 years or so. Athletes going into school are simply better- faster, stronger, and better prepared for collegiate swimming. They’re starting from a better foundation, and therefore they can reach greater heights in the four short years they have. The frosh of 2017 are hungry too!

I also think that college swimming/diving has become a bigger event in its own right. NCAAs is always important, but opening it up the way… Read more »