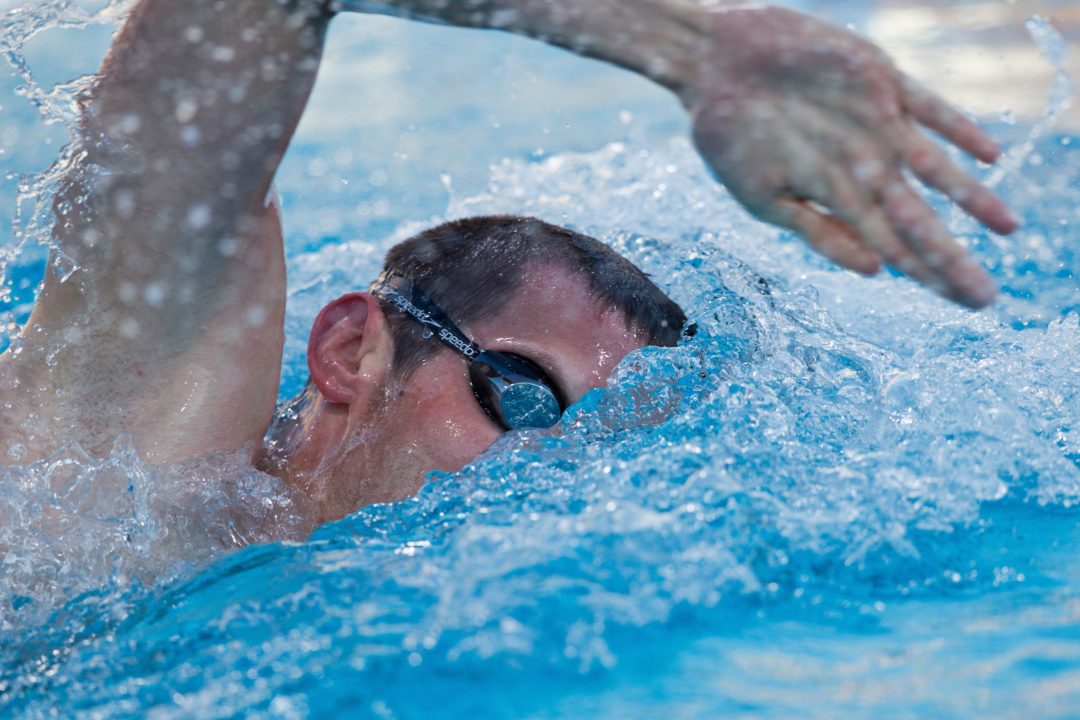 Canada's Ryan Cochrane, brunt of Swimming Canada's April Fools joke, is really focused on the pool. But which races are his goals in Barcelona? (Photo: Tim Binning/TheSwimPictures.com)

Swimming Canada’s World Championship Trials begin this Wednesday in Victoria, British Columbia and the Saanich Commonwealth Place pool will be overrun with some of Canada’s best, as well as the most buzz we’ve seen in the country for a non-Olympic Trials meet in a long while. There’s a new man in charge, and Canada’s newest High Performance Director John Atkinson will be using this meet as a benchmark for improvement and as a big measuring stick for what needs to be done with his new program.

The pool was built for the 1994 Commonwealth Games hosted in Victoria, and with temporary seating can expand past 2,700 people. The 50-meter, 8-lane, all-deep (2-meters) pool is part of a huge complex that also includes a 25×20 meter diving well (usually kept warmer, though surely will be cooled down to competition standards for this meet), and for after athletes finish their swimming a wave pool and a huge water slide.

This meet is the primary selection meet for the 2013 World Championships. It is also a secondary selection meet for the World University Games squad that goes to Kazaan, Russia this summer. Swimming Canada is encouraging its selected athletes to attend both the World University Games and the World Championships this summer – which would make for a busy month of July.

Swimming Canada has basically given the maximum berth to their selection procedures to ensure that they send a large squad to the World Championships; this could be vital to the team’s development with so much youth and turnover in the organization.

See the FINA “A” and “B” qualifying standards here.

The selection procedures for tbe 2013 World Championships in Barcelona:

This is sort of similar to the two-meet procesure that Great Britain has used in the past, with one important (and very relevant) difference: once a swimmer qualifies for the meet at Trials, they don’t have to worry about someone coming in at the later event and undercutting them. The later event is simply a second opportunity to fill vacant spots without damaging the training cycle of those who earned their way onto the team this weekend.

Selection criteria for the World University Games in Kazaan, Russia:

Make sense? Well then, let’s look at the races to watch.

There will be a large contingent of international swimmers in this meet, though they will be ineligible to swim in A-finals of events. Among the most notable of these are Estonian Martiin Liivimagi, Swedish National Record holder Rebecca Ejdervik, Mexico’s Susana Escobar, American Ashley Steenvoorden, and a large portion of the University of Missouri breaststroking group.

6 Things to Watch in the Pool

1. Where does Ryan Cochrane’s Focus Lay? – Ryan Cochrane had an absolutely spectacular 2012 season. He took a silver medal in the 1500 in one of the fastest times in history. But when you swim a time like 14:39 in the 1500, a number that nobody in the modern era could plausibly be disappointed in, and still look at the man in front of you and see a 20-year old who was eight-seconds better, it’s hard not to be discouraged.

Cochrane has hit the USA Swimming Grand Prix circuit hard this year, competing in both Austin and Orlando. What we haven’t seen from him yet, though, is any 1500 freestyles. He’s been going big after the 500, and mixing things up with the 100/200 freestyles and the 200 backstroke, but this weekend’s meet will be the first record of a 1500 we can find for him since the London Olympics. That’s not unusual, though: the Canadian times database from last year showed that he didn’t swim the 1500 until the Olympic trials. He’s been as fast as 3:52 in that 400 so far, and his 200 is down to a 1:51.

2. NCAA Swimmers Coming Right Around to Trials – Canadian coach Mike Thompson did a more in-depth podcast on this a few weeks ago, but for those college swimmers training in the United States, there is undoubtedly some conflict between the Olympic Trials and their collegiate championship meet a few weeks ago. The Indiana girls (Bronwyn Pasloski, Brooklyn Snodgrass, Cynthia Pammett, Brenna MacLean) insist that they were entirely focused on NCAA’s. Minnesota breaststroker Kierra Smith has said publically (in another coach Mike podcast) that for her freshman year, Worlds Trials were the primary meet. Maybe the most significant of all of them, Florida’s Sinead Russell, hasn’t stated publically what she’d be doing, but she certainly looked fast at both SEC’s and NCAA’s.

The good news is that for Russell, much of her competition has either retired or is in the same boat as her (Missouri’s Dominique Bouchard was also very fast at NCAA’s), so if she can hit the FINA A-cut, she should be good to make the Worlds team. She’ll have a little push in both backstroke races from Hilary Caldwell, but we expect that she’ll be ready enough to make the team without any major issues. On the men’s side, among the biggest names with conflicts are USC’s Chad Bobrosky and Cal’s Jeremy Bagshaw, both of whom swam at NCAA’s. Bobrosky was 2nd at last year’s Olympic Trials in the 400, and though Bagshaw didn’t have a great meet in Montreal, a swim later that summer ranked him as the second-best Canadian in the same event in 2012. Hassaan Abdel-Khalik, who just won a National Championship with Michigan, will also be a factor in the middle-distance events.

3. Women’s Breaststroke Races – Always at these meets the women’s breaststroke races are a thrill to watch; the Canadians go 10+-deep in World Class female breaststrokers. Former World Record holder Annamay Pierse is now retired, but that doesn’t hinder the depth at all. Jillian Tyler, Tera van Beilen, and Martha McCabe are the top-tier in this group as the three Olympians; van Beilen swam both breaststroke races at the Olympics. But there’s a ton of young talent behind them. Ashley McGregor and Kierra Smith, both trained at U.S. colleges, are threats in the 200. NCAA Division II Champion Mariya Chekanovich, the first NCAA Champion from a Canadian school (Simon Fraser University) should at least make both A-finals.

The darkhorse of the whole thing might be young 19-year old Rachel Nicol. She enters the meet as the fastest Canadian in both the 100 and 200 breaststrokes so far in 2013. It seems like her best bet would be in the shorter 100 meter race at this point of her career.

4. Erika Seltenreich-Hodgson: Future IM Star? – Erika Seltenreich Hodgson eschewed several offers from American colleges to stay home and go to the UBC program – one of the best in Canada – and it appears as though the Thunderbirds will be lucky to have her. At last year’s Olympic Trials, Seltenreich-Hodgson was a 2:14.39. That was a great time for a swimmer of her age, but since then her times have really taken off. She now comes into the meet with a best of 2:12.93, having dropped at three different championship-style meets last summer.

She’s due for a pop, and her primary focus for qualifying for the World Championship team will be that 200 IM. With neither Julia Wilkinson nor Erica Morningstar swimming this year (they went 1-2 at the Olympic Trials), the road to Barcelona should be pretty clear for her. If she drops a few seconds, she could also make the team in the 400 IM. She’ll also take a shot at the 100 back, and the 200 breast, but with crowded fields in both of those races the IM’s are the clear path.

Among her challengers will be Alexa Komarnycky, who has been way-up and way-down over the last two years. Even at last year’s Trials, she had some tough swims, but then some really great swims that put her onto the Olympic team in the 800 free. The upset-special in this race is 15-year old Sydney Pickrem. She’s training at the Clearwater Aquatic team under Randy Reese (coach of Becca Mann) who has had about as much success in history as anyone in terms of turning teenage girls into world-ranked swimmers.

5. Who Will Emerge in the Men’s Sprint Group? – Brent Hayden was the lead of the Canadian men’s sprint group for about a decade, and what a decade it was as he tore his way to a World Championship in 2007 and Olympic bronze medal in 2012. Canadians became big fans of men’s sprinting in his time, and now they’ll want someone to replace him. The short term solution is guys like Tommy Gossland and Blake Worsley, who are in the prime of their sprinting careers. Worsley is especially interesting, as he’s the first big product of the Toronto training group led by former British sprint coach Ben Titley. The future, though, might be Luke Peddie. He’s a young sprinter at 19 years old and missed the Olympic team relay berth by some specific, and vexing to many, relay rules.

6. The New Sensation, Noemie Thomas – Noemie Thomas broke the Canadian National Record in the 50 fly at December’s Short Course World Championships, and at the same time the 16-year old stole the hearts of the Canadian swimming community. She was the fastest swimmer in prelims, and at 5’4″ tall, ended up finishing 4th overall. That’s 4th behind swimmers like Jeanette Ottesen, who is 6 or 7 inches taller. Now, we’ll have to see if Thomas can translate that into long course success. To make the World Championships, she’ll have to be close to lifetime bests to hit Automatic Qualifying Times, as well as challenge some deep butterfly fields. Most specifically, 20-year old Katerine Savard and veterans like Mackenzie Downing and Audrey Lacroix. Speaking of American-trained swimmers, Arizona State’s Caroline Kuczynski will try for spots in both the 50 and 100 butterflies. At last year’s Olympic Trials, she had no trouble hitting best times even just a few weeks after a great NCAA Championship meet. Her 2013 NCAA meet wasn’t as good (few were on the women’s side), so maybe she’s saved even more for these trials.

I remember watching live on TV when Kieren Perkins swam in this pool and broke the 800 WR on his way to the legendary 1,500 WR.
Just amazing.

P.S. US and Canadian trials for IPC worlds take place this week at the can-ams in Minnesota. I think there is a convoluted way of getting pysch sheets via US paralympic committee website; swimming;events. Weggeman, Long, Zook, Silverman, Becherer, all set to swim, as well as Summer Mortimer and Valerie Grand-Maison. All gold medalists from London (as far as I can remember). On train with limited resourses so can’t get links, sorry!

The only 2 Canadian males who made NCAA individual A final swims should be in the mix as well- Michigan’s Richard Funk in breaststroke events, and Stanford’s Matthew Swanston in backstroke events.