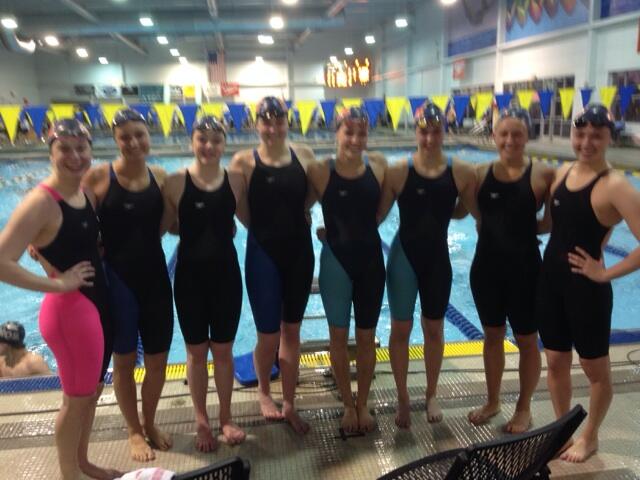 The pictures a bit blury, but they're all there: the 8 swimmers who broke National Age Group Records for SwimMAC Carolina on Thursday night in Charlotte. Current photo via David Marsh

The ladies of SwimMAC Carolina, racing in their home pool at the Charlotte sectional meet (also known as the 2014 ESSZ Speedo Championship Series stop) have rewritten the record books quite literally for 15 & ups in the 800 free relay.

Not only did their “A” and “B” relays go 1-2 in this race, but both broke National Age Group Records.

That time just missed, by half-a-second, the NCAA Qualifying Standard (aka, the automatic standard)from last year, and all four swimmers are still in high school. Had they stacked their best 15-18 relay, they could have come up with a relay that might have gone untouched at the 15-18 level for a long time.

Editor’s note: the splits were erred on the live results, so they are all thanks to SwimMAC coach John Fedena.

That’s a huge swim for the 16-year old Jahns; it cleared her own personal best (and team record) set at this same meet last year by a full 10 seconds.

The top junior swimmer was Dirk Bell from Live to Play Swimming in South Carolina, who was a 9:17.66, and Justin Ress fromt he Marlins of Raleigh placed 3rd in 9:18.79.

Live to Play has done a great job of developing their distance swimmers; they had two in the top four, with another 18-year old, James Koval, touching 4th in 9:19.26.

Still to come in this meet are appearances by SwimMAC’s pros. The men’s 200 free on Friday could be electric, with Dax Hill, Ryan Lochte, Laszlo Cseh, and Dion Dreesens scheduled to swim. Lochte is also entered in the 100 fly on Friday.

MOR represent in the bottom corner! Great meet to watch so far, can’t wait to see what else Baker has in store for us!

You got that right HULK!

If Baker was in college, her 1:43.61 leadoff would be the 4th fastest in the NCAA so far this season, bettering Neal/Lopez/MacLean/Brandon/Chenault!

What’s crazy about Baker’s split is not only would it be 4th in the NCAA, but that that’s in an event she likely wouldn’t swim collegiately. Her backstroke and IMs are much better than her freestyle, and you could argue her breast and fly are equal to her free. I’ll go out on a limb and say she’s going to end her career with Olympic medal counts rivaling those of Coughlin, Torres, and Franklin.

I know it’s high, but she’s an amazing swimmer in everything. Tracy Caulkins-like. She’ll definitely be a great 800 free relay swimmer if her times continue as such, and she’ll be there in backstrokes and IMs. My high expectations have her in 800 free relay, 100/200 back, 200/400 IM, and 400 medley relay in Tokyo. No expectations for 2016, just a lot of fast swimming.

Either way, she’s gonna make one hell of an 800 Free Relay swimmer.

the reason coach marsh’s photo is a bit blurry is because these girls are so fast , when standing still, they are vibrating in idle mode and buzzing ….. just sayin

What does Cseh there? 😆
I have missed a news?

Very impressive 1.43.61 for Miss Baker.
I didn’t expect at all something as fast from her on freestyle.
It looks like she’s in a monster form to swim monster times this week.

Ok. Cseh is just there to swim. I wondered if I had missed a news about a possible arrival of the Hungarian swimmer at SwimMAC.

bobogigi – I believe he will be training for about two weeks with them, but nothing permanent that we know of.

A little publicity. 🙂
I’ve made a little recap of all the fast meets in USA this week with all the links you need to have the results.
Link here
http://swimswam.com/swimswams-weekly-wonders-age-group-swimming-3122014/

What was bakers previous best in the 200 free? That is a crazy time. Is she going to be swimming other events or were they just going for records in this relay??

It’s in their home pool, so my guess is she’ll be doing some more.