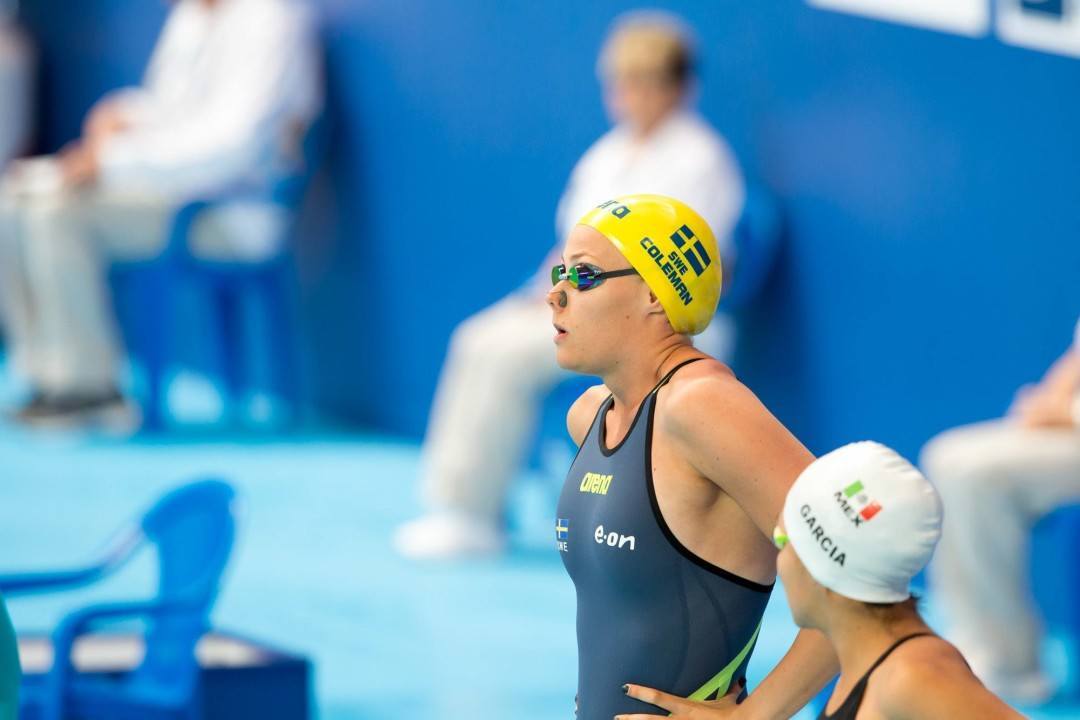 Michelle Coleman blasts the 3rd-fastest 200m freestyle in the world this season while competing at the Miami Super Challenge. Archive photo via Tim Binning/TheSwimPictures.com

While the South Australian States and Victorian Open meets were wrapping up in Adelaide and Melbourne, respectively, another cluster of stand-out athletes took to the pool in the Gold Coast, Australia this weekend.

Miami Swimming Club, home of Australian distance ace Grant Hackett, hosted its annual Miami Super Challenge at the Miami Aquatic Center, which saw athletes both in the age group and elite sectors of the sport compete. This year also saw a smattering of British athletes join the party, in the form of freestyle specialist Jazmin Carlin and backstroking superstar Adam Peaty, among a few others.

British women led-off the meet with consecutive wins right off the bat, with Carlin and Molly Renshaw taking the first two events. Carlin raced her way to a 4:11.05 winning time in the women’s 400m freestyle, enough to hold off a charging TSS Aquatics’ Kiah Melverton, who touched in 4:11.36 for 2nd.

Renshaw then had her way  with the women’s 200m breaststroke race, beating the competition by almost 9 seconds. 2:27.86 was Renshaw’s winning time, well-off the time of 2:24.62 she earned at December’s Amsterdam Cup.

The men’s 400m freestyle saw 20-year-old Jordan Harrison claim the win with a time of 3:53.33, dropping over 2 seconds from his morning prelims effort. Bond’s Cameron McEvoy stepped up for 2nd place, touching less than half of a second behind in 3:53.74 for silver. Comeback kid Grant Hackett finished in 4th place in a mark of 3:58.00, with Great Britain’s  Caleb Hughes nabbing bronze in 3:56.11.

For Hackett’s part, the 35-year-old also competed in the morning heats of the men’s 200m freestyle, clocking a time of 1:51.31 for the 2nd seed behind Aussie teammate Thomas Fraser-Holmes, only to scratch the finals. Fraser-Holmes would up winning the event in a time of 1:47.54.

European Games double gold medalist, Luke Greenbank (GBR) snagged the men’s 200m backstroke in dominating fashion, clocking 2:02.59 for the win over the field by more than 12 seconds. Greenbank would have to settle for silver in the shorter 100m distance, however, as teammate Chris Walker-Hebborn threw down a 55.96 for the victory.

Michelle Coleman heated things up in the women’s 200m freestyle event, topping the podium handily with a stellar effort of 1:56.07, a personal best for the 22-year-old. Coleman knocked about 3 seconds off of her 1:59.10 morning swim to clinch the victory and surge to the upper echelon of the world rankings, now sitting in 3rd. For perspective, Coleman’s mark of 1:56.07 earned today would have garnered her a 4th-place finish at the 2015 World championships.

Although listed under the Miami club, Coleman competes for Sweden internationally, under whom she scored bronze in the 100m freestyle at the 2014 European Championships. At last summer’s World Championships, Coleman’s swiftest 200m freestyle mark came in the form of her 1:57.36 split on her squad’s 4th-place 800m freestyle relay. She also logged a 1:58.12 individually in the 200m free, failing to make the final.

Coleman did additional damage here in that event at the Miami Aquatic Center, where she logged a winning time of 54.77 in the women’s 100m freestyle. Her swiftest time in that event in Kazan was the 54.22 she logged for 11th place after semi-finals.

Also making a mark on the world’s top time list is World Record Holder, Adam Peaty, who laid waste to the competition in the men’s 100m breaststroke in the Gold Coast. Peaty logged a winning time of 1:00.05, a full 3 seconds over the remainder of the competition.  The time is certainly slower than his usual sub-minute outings, including the 59.28 he most recently registered in Dubai, but today’s result was enough to hit the world’s top 10.

As a Swede my realistic hope is that Sarah can crank out a similar swim as in Kazan, Coleman 1.55 high, Hansson 1.56 mid, Marko-Varga 1.58 low. Not necessarily in that order. If they do it at the same time it’s roughly 4 seconds shaven off the Kazan time. That’s a big if though, very rarely do all four bring their top swim at the same time. Same goes for the rest of them, though.

Our advantage is that we don’t have an olympic trial, the girls can focus 100% for the championship and that’s why we can compete in the relays despite our lack of depth. Preparation is always good for the few going.

Mistake. I think sarah sjostrom, Michelle Coleman and Louise hansson could help both the Swedish 4×100 and 4×200 free relays.

Michelle Coleman could be in the 1:55 range based on her new pb

Louise hansson has been improving and has a new short course pb of 1:53 which is very recent. Her long pb is a 1:58 but she,s been improving so she could possibly be in the 1:56 range soon.

They should have asked Gabriella Fagundez (pb 1:57.9 from the 2011 Mare Nostrum) to come out of retirement. She’s the same age as Marko-Varga .

On a serious note – She must be a bit irked that suddenly Sweden have all these freestylers, when she was their only good 200 swimmer for so many years haha.

Oh yes. If Sweden could find a 4th girl in 1.58 to go with Sjöström, Coleman and Hansson, then even the silver medal behind USA could be possible.

Ida Marko is swimming, and was the 4th leg at Worlds, was a 2:00. Her best is a 1:58.21 from Beijing, hasn’t been under 2:00 since 2011. Stenkvist, who trains in the states at USC, went 2:01.28 last summer at the World University Games. I think there’s a chance they’ll swim them both (and maybe Gardell) in prelims it they think they can get away with it and pick the best one.

Gardell, FWIW, swam only one race at Winter Nats in the US – the 200 free. Swam prelims, finals, and then time-trialed it, even though she swam the 200 IM and 400 IM individually at Worlds. I think that speaks volumes about Sweden’s desire for relay medals in… Read more »

Didn’t she start training for the 100 in 2011 though and more speed? So, perhaps her 200 times since are a little misleading?

Yeah, Gardell has said her goal is to make the Olympics as a relay girl. Her chances to qualify individually are slim, Sweden only names you if you’re good enough to reach a final or are an promising youngster.

But Kuras and Marko-Varga are the ones given olympic financial support as relay swimmers. Marko-Varga started training full time again this fall after the Worlds. She’s the best bet I’d say, for both the 100 & 200.

Looks good for Sweden in 2016. If she split that time in the relay in Kazan, they would have gone 7:48.95, winning them the bronze. Know all they have to do is fine someone who can swim faster than 2 minutes.

Siobhan Marie O’Connor also set a nice PB – 1.07.7… Really good when compared to her teammates’ times recently, which suggest they are in a heavy training block.