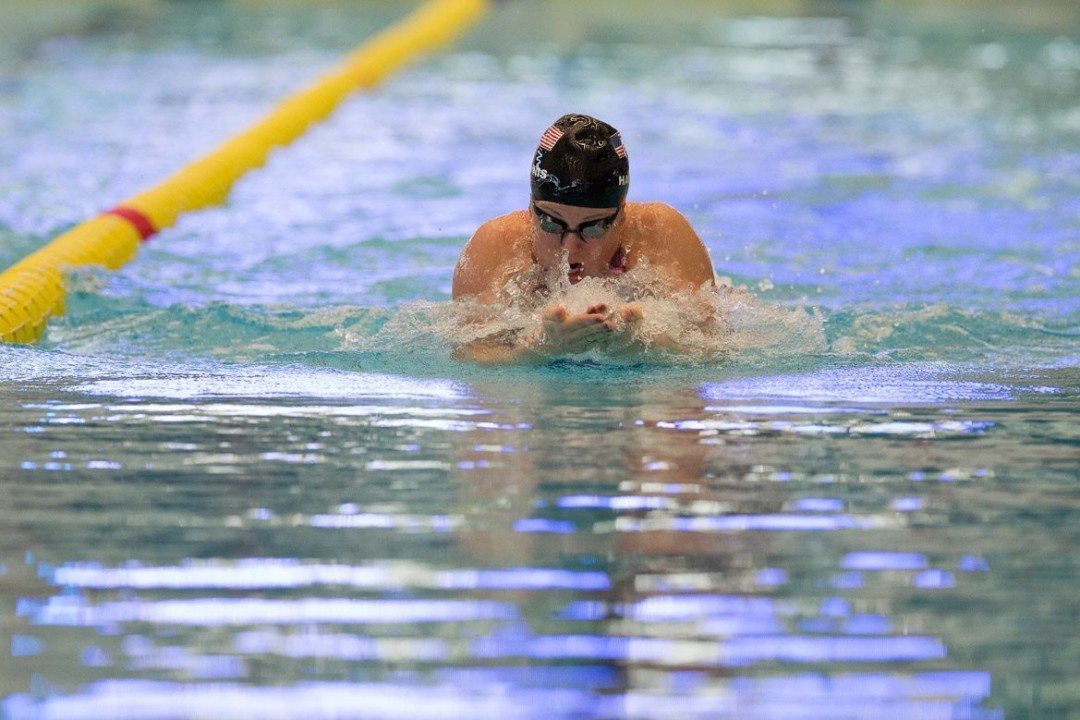 Former NCAA star Molly Hannis took down a meet record and moved to 4th in the world rankings in the 100 breast on the final day of the Geneva International Challenge. Current photo via Rafael Domeyko/Domeyko Photography

Day three of the Geneva International Challenge featured huge meet-record swims from Molly Hannis, Damir Dugonjic, Zsuzsanna Jakabos, Laszlo Cseh, and Madison Kennedy. Hannis in particular had an insane swim, a 1:06.47 100 breast that took down the meet record by nearly four seconds and moved her up to fourth in the world rankings.

This weekend’s bronze medalist in the 100 fly and 100 free, Swiss swimmer Maria Ugolkova took the win in the 200 free, edging out Kate Ziegler‘s 2:02.04. Ugolkova went out fast, a 59.31, and though Ziegler started to gain on her at the end, it wasn’t quite enough. Great Britain’s Hannah Burvill finished third in 2:02.52.

Laszlo Cseh, the Hungarian record-holder in this event, took second just behind in 1:50.46, and Switzerland’s Alexandre Haldemann finished third in 1:50.77. This was Cseh’s first finals loss of the meet.

Damir Dugonjic of Slovenia kept the meet record streak going with a 1:01.69 to take down his prelims swim record of 1:02.57. He did the same thing yesterday, grabbing the 50 breast meet record in prelims and breaking it again in finals.

Switzerland’s Alexandra Froissart took the win in the 200 back, posting a 1:04.93. Great Britain’s Emily Cutler came in a close second with 1:05.02, and Switzerland’s Seraina Sturzenegger came in third with 1:06.68.

The 18 and under swimmers far outswam the older field in the 100 back. Maxence Orange of France finished in 57.73, followed by Switzerland’s Thierry Bollin’s 57.86. Britain’s James McFadzen clocked 58.20 to round out the top three.

Zsuzsanna Jakabos grabbed a meet record in the 200 fly, far outswimming the field. Her 2:10.78 took down American Bridget O’Connor‘s 2:12.67 from back in 2008. Although Jakabos’s swim from today doesn’t crack the world top 25 rankings, she currently stands fifth in the world this season with a 2:07.77 from the FINA World Cup in Dubai.

Ariana Letrari of Italy came in second with 2:16.68, and the next-fastest time came from 17 and under swimmer Ludivine Long Wah of France, who finished in 2:23.02.

Madison Kennedy added another meet record to her collection in the 50 free, swimming 24.94 to take down her record swim from this morning, a 25.29. The swim nearly matches Kennedy’s season-best, a 24.72 ranked sixth in the world. Kennedy currently holds the fastest American 50 free from this season, ahead of Simone Manuel‘s 24.83 from AT&T Winter Nationals, Abbey Weitzel‘s 24.86 from the same meet, and Natalie Coughlin‘s 25.19 from Austin.

Jakabos came in second with 25.69, followed by Switzerland’s Sasha Touretski in 26.10.

The final event of the day went to this weekend’s 100 champ Andrey Grechin of Russia in 22.85. Bulgaria’s Vladimir Popov came in next with 23.05, and Switzerland’s Nicolas Zoulalian finished third in 23.59.

And another American girl who can swim 1.05 in the 100 breast at trials!
Can you lend one of them to France? 🙂