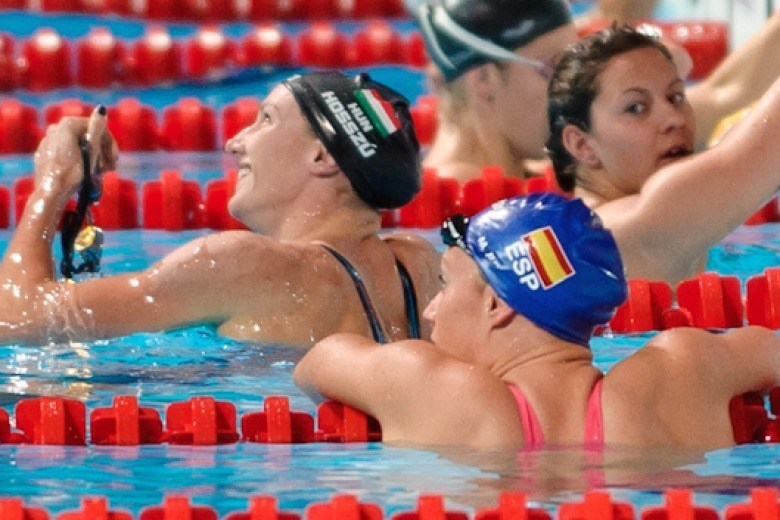 The start lists for the 2016 Euro Meet, to be held from the 29th-31st of January at the D’Coque Aquatic... Archive photo via Victor Puig

The start lists for the 2016 Euro Meet, to be held from the 29th-31st of January at the D’Coque Aquatic Center in Luxembourg, have been released.

A glance at the meet entries shows that there is a chance to watch some interesting and fast races with Katinka Hosszu (Hungary), Hannah Miley (Garicoh ASC, GB), Zsuzsanna Jakabos (Hungarian Team) and Mireia Belmonte (Royal Spanish Swimming Federation) who all entered the 400 m IM, 200 m butterfly on the first day of the competition. In the 200 m butterfly also Germany’s Franziska Hentke is in the entry list – she is the 2015 European SC Champion and the actual number one in the FINA LC world ranking. Three events are on the schedule on Friday in Luxembourg for Katinka Hosszu, Mireia Belmonte and Hannah Miley for each of them – they have entered the 400 IM, 200 m butterfly and 800 m freestyle.

The Euro Meet is a very popular swim meet every year at the start of the season – they always have some of the world’s best swimmers besides youngsters from all over Europe, some of them just 13 years old. During the three days of competition we will see up to nearly 180 swimmers who entered for example the men’s 200 m freestyle. The stage at the Piscine D’Coque Aquatic Center is already set – and the swimmers find perfect surroundings with a 50 m, 10-lane competition pool and also a 50 m training pool as well as a 25 m warm-up pool. In addition, a bonus of €21,800 (about 23.500 USD) in prize money is offered.

Also the men’s line up from Friday until Sunday is impressive with Laszlo Cseh (Hungary) who has entered in the 400 IM on the first day – Laszlo is on the most successful IM swimmers next to Phelps and Lochte over the last 10 years. Cseh also is found in the start list in the 200 m butterfly – he is the the 2015 World Champion in the long course event. We also will see Marco Koch, the 2015 World Champion in the 200 m breaststroke, swimming the 400 IM in Luxembourg – perhaps he will attack the German national record in this event, held by Jacob Heidtmann with 4:12,08 – Koch broke the 400 IM SC record last year at the German short course nationals, swam 4:01,87 minutes. Koch also has entered the 50 m, 100 m and 200 m breaststroke.

More races and swimmers to watch during the three days of competition are:

And the lady’s 200 m IM battle of course will continue with this line-up: Hosszu versus Belmonte versus Miley versus Jakabos.

Thank you for the hint.