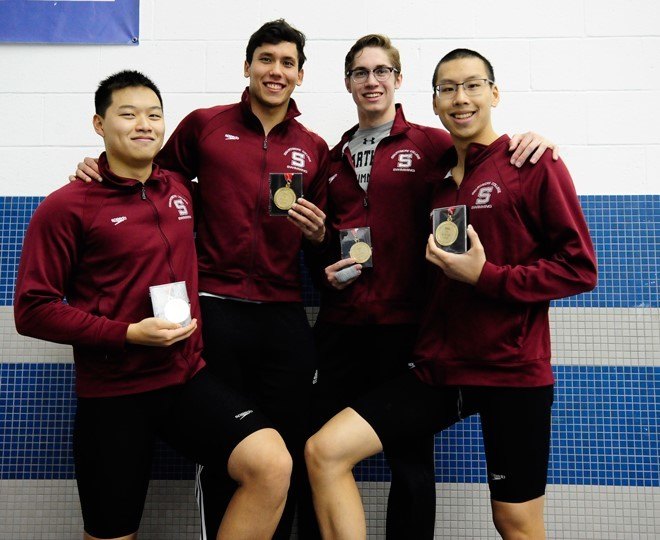 Lancaster PA, 8 colleges gather this weekend for the 24th Centennial Conference swimming Championship. Since the conference’s inception it has been a tale of two teams on the men’s side as only Gettysburg (14) and Franklin and Marshall (8) have ever hoisted up the trophy. The Gettysburg Bullets, who emerged as dual meet champions this season, look to defend their crown in hopes of achieving their 7th consecutive conference title. However, a changing of the guard appears feasible as the Swarthmore Garnet establish a strong early lead at the conclusion of day one with 226 points trailed by Gettysburg (187), Washington (146), Franklin and Marshall (142), Ursinus (137), Dickinson (116) and McDaniel (68).

The meet began with a conference first as the Bullets’ relay of (Dougherty, Nieves, Sorenson, Leyens) tied with Swarthmore (Steele, Yang, Smith, Tse) in a time of 1:22.99. Washington claimed the bronze with a time of 1:25.22. The tie set the tone early for Swarthmore as they managed to reveal a chink in the orange and blue armor who traditionally dominate the sprint freestyle events.

In the 500 freestyle, freshmen Ogden Leyens of Gettysburg cruised to victory in a NCAA “B” cut time of 4:31.56. When asked about his early lead in the race, Leyens responded, “I saw that I was ahead so I focused on staying strong and holding the lead.” Jake Menzer of Ursinus (4:34.52) and Michael Lutsker of Swarthmore (4:36.52) rounded out the top three. Despite the top finish for the Bullets, Ursinus utilized their depth by having 4 swimmers place in the top 16.

The 200 Individual Medley proved to be a key event for the Garnet as they claimed 3 of the top 4 spots. Leading the way with another NCAA “B” cut was Sophomore Jeff Tse (1:51.73). “I had a rough start to the season, so I am extremely happy with the win” Tse commented. Following him was senior teammate Liam Fitzstevens (1:52.92) and Aidan Sullivan of Washington (1:54.02).

Gettysburg responded by claiming 3 of the top 8 spots in the 50 freestyle. In 1st was Tyler Dougherty who swam a NCAA “B” cut time of 20.52. However, it was all business for the Gettysburg Junior, for when asked to comment on his race, Dougherty replied, “I have to warm down.” Following Dougherty was Swarthmore’s Adam Steele (20.73) and Francisco Nieves of Gettysburg (21.16).

During the final event of the evening, Swarthmore showed dominance with a decisive win in the 400 medley relay. The team of Tse, Hernandez, Steele and Fitzstevens touched in a time of 3:22.19 which was clear of runner-up Franklin and Marshall by over 3 seconds. Gettysburg fell short to the Diplomats by 0.08 seconds to capture a bronze in the event. Additionally, both Ursinus as well as Gettysburg’s B-Final relays were disqualified, eliminating the possibility to gain key points for both teams, which could haunt them at the conclusion of the meet.

Looking into Saturday’s finals session there a number of teams hoping to move up the rankings, most significantly being Franklin and Marshall who boast 3 swimmers in the 100 Butterfly final. When asked about the Diplomat’s signature strength Coach Delia replied, “Comradery, we won’t quit on one another, in fact we get stronger as the meet goes on. The strategy is to minimize damage early and close the gap as the meet continues.” Conversely, Swarthmore will be looking to maximize their lead through day 2 with high scoring potential in the 400 Individual Medley and Medley Relays in an effort to hold off any challengers.

Meanwhile on the women’s side there have been 4 different teams to emerge as victors through the years with Gettysburg (14), Franklin and Marshall (3), Ursinus (3) and Swarthmore (2). The Ursinus Lady-bears were projected as the pre-season favorite to win the conference and hope to secure a 4th consecutive championship along the way. While any team could win, the likelihood of toppling the reigning Lady-Bears appears to be slim. They’re talent as well as depth have proven to be overwhelming over the past three years and are showing no signs of slowing down.

The 500 freestyle featured an incredible swim by Dickinson’s Olivia Lyman who broke the 5 minute mark on her way to a NCAA “B” cut time of 4:59.40. When asked about her pre-race motivation Olivia said, “I’m studying abroad next year so I knew this was going to be the last 500 I would swim for a while. I just wanted to get after it and make the most of the opportunity.” Coming in 2nd behind Olivia was Julia Portman of Washington in a time of 5:06.85 who was closely followed by Ursinus’ Haley Sturla (5:08.77).

The 200 Individual Medley also showcased an impressive NCAA “B” cut swim of 2:05.94 from Peyton Leyens. “I faded in the standings last year from the top seed to outside the finals, so I considered this my revenge tour” said Lyons. Rounding out the top three was Jenni Clune (2:09.90) from Washington and Katie Madden from Ursinus (2:10.66).

The Women’s 50 Freestyle was very well rounded as all 8 finalists finished within 1 second. Touching first was Syd Knadler in a time of 24.13, followed by Sydney Gundersen of Ursinus (24.34) and Kate Crilly from Gettysburg (24.38).

The first finals session of the meet wrapped up with yet another strong victory in the 400 Medley Relay for Ursinus at 3:50.97. The team of Lyons, Tierney, Baker, Gundersen cruised to an almost 6 second win over runner-up Gettysburg (3:56.84). Finishing in third was Washington (3:57.62).

The second day of finals on the women’s side will feature another strong showing from Ursinus as they hope to pull away from the field with numerous finalists in every event. The Lady-Bullets however, will look to challenge the Ursinus women in the 200 Medley Relay, while Bryn Mawr will see a key point scoring opportunity. “Both backstroke events will be our strengths with potential finals births for both the 100 and 200” said Bryn Mawr coach Matt Moyer. “But at the end of the day, relays set the tone for us. It allows us to see time improvements across the board and that’s what it is really all about” Moyer added.

Finals begin at 6:00 PM at the Kunkel Aquatic Center.