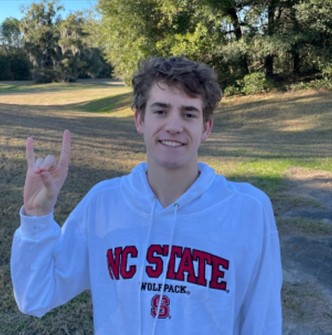 Aidan Fuller, a Summer Juniors qualifier and 2022 graduate from Gainesville, Florida, will join NC State for the 2022-23 season.

Aidan Fuller, a Summer Juniors qualifier and 2022 high school graduate, has announced his commitment to swim and study at NC State.

I’m beyond excited to announce my verbal commitment to swim and study at NC State! I’d like to thank my coaches, family, teammates, and friends who have supported me over the past 4 years and made this possible. Thank you everyone and GO PACK!♦️🐺

Fuller is a freestyle specialist from Gainesville, Florida. He trains and competes with the Gator Swim Club and Gainesville High School.

Fuller competed at the FHSAA 3A State Championships in his junior and senior years. The FHSAA system is split into four classes, with 1A being the smallest schools and 4A being the largest schools. At the 2020 State meet, Fuller competed in the 100 and 200 individual freestyles. He finished in 5th and 2nd place, respectively. He was also a member of Gainesville’s 200 and 400 freestyle relays.

He dropped about one and a half seconds in prelims of the 500, then shaved another .27 off in finals to finish 4th. Fuller’s biggest time drop of the meet was in the 200 IM, where he swam nearly two and a half seconds faster than his previous best, clocking a 2:00.27.

At the 2022 ACC Men’s Swimming and Diving Championships, NC State came away champions with a 309-point lead over second place Louisville. With his current best times, Fuller would finish just a few spots away from making finals in his best events.

NC State expects to be even stronger next season, with an impressive class of incoming recruits. Fuller will be joining fellow class of 2022 graduates Quintin McCarty, Drew Salls, Lance Norris, and Michael Cotter in Raleigh in the fall.

FFT is a SwimSwam partner

Wolfpack has a lot more than that coming in that HS class of 2022. Ponsler, Ewing, McKenzie, Weaver, and more. They have a big and strong (arguably the top class for the 2nd year in a row) coming in.