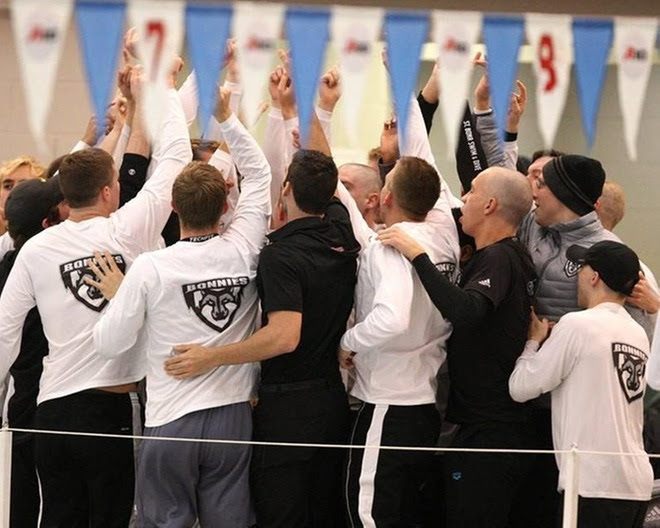 The St. Bonaventure University men’s swimming and diving team has signed seven student-athletes to National Letters of Intent to join the program in the Fall of 2018, head coach Sean McNamee announced.

The 2018 recruiting class for the Bonnies includes four swimmers and three divers. The four swimmers include: Matthew Stanley, George Kalletta, Hylton Collinson and Jake Ruffolo. The three divers that will be joining the Brown and White are: Jonathan Ek, Nathan Howze and Matthew Bielobradek.

Matthew Stanley joins the Bonnies from Carolina, R.I. He competes for Chariho High School where he holds the Rhode Island state record in the 100-breaststroke. Stanley is also a three-time Rhode Island state champion and a two-time Scholastic All-American. He plans on pursuing a degree in business.

MCNAMEE ON MATTHEW STANLEY: “Matt comes in and addresses our weaknesses in the breaststroke. He has the ability to shore up a glaring weakness that we have had this season. He will have to develop his 200-breaststroke, but will immediately be competitive.”

George Kalletta comes to St. Bonaventure from Manorville, N.Y. and competes for Eastport South Manor High School. Kalletta is a state qualifier, finishing 11th in the 500-freestyle and 12th in the 200-IM at the New York State Championship meet. He plans on majoring in business.

MCNAMEE ON GEORGE KALLETTA: “George is a late bloomer and has really come into his own over the last year. We are expecting huge things from him. He is a multi-purpose kid where we can plug him in multiple areas. He is a family oriented kid and really loved everything he saw at St. Bona when he came in for his official visit.”

Joining the Bonnies from Johannesburg, South Africa and Iowa Lake Community College is Hylton Collinson. Hylton has been competing for Iowa Lakes for the past two years, winning a JUCO National Championship in three events.

MCNAMEE ON HYLTON COLLINSON: “Hylton is one of the most high-profile incoming recruits that we’ve ever had. He addresses our main weaknesses in breaststroke almost immediately and will addresses our deficit in podium finishers.”

MCNAMEE ON JAKE RUFFALO: “He is a local talent and finished top 10 in multiple events at the state meet. He is raw and he will swim times that be immediately competitive in the Atlantic 10 Conference.”

Bonnies diving coach Stephanie Fleming has brought in three divers to add to the roster next season.

“I am thrilled,” Fleming said. “We have a great class of divers coming in! It might be the strongest class yet in Bonas history. All of these divers will come in and have an immediate impact. We will be a young team, but a good one. Each of these divers are coming in with a lot of talent, but they still have so much untapped potential. I’m really looking forward to working with all of them. They’re great divers, students and people and will add a lot to the team.”

Johnathan Ek joins the Brown and White from Hopwood, Pa. Ek dives for Laurel Highlands High School in the 1-meter dive. His personal best scores are 301.05 for six dives and 426.15 for 11 dives. Ek is a two-time WPIAL silver medalist. Johnathan intends to major in health sciences.

FLEMING ON JOHNATHAN EK: “John was a hidden gem. He works with a fantastic coach, giving him a great foundation. He’s currently working on his 3M list and I know by the time John gets here next fall, he’s going to have a very competitive list on both 1M and 3M. His patience and strength on the boards is one of his greatest assets.”

St. Augustine, Fla. native Nathan Howze joins the Bonnies as a diver. Howze competes for Bartram Trail High School in the 1-meter and 3-meter dives. He is a three-time FHSAA Class AAA state finalist and a state champion in 2017. In 2015, Howze was a USA Diving National qualifier. He was crowned 2017 Bolles Invitational Champion and has been named to the St. Johns River Athletic All-Conference team for three years. Howze plans on majoring in pre-medicine.

FLEMING ON NATHAN HOWZE: “I had the great fortune to work with Nathan this past summer at diving camp and he immediately stuck out to me as someone I knew I wanted on my team. He is a great kid and such a hard worker. He’s already proven himself to be a great competitor with winning the 3A State Meet this season and he’s got a great amount of strength and power that will take him far.”

FLEMING ON MATTHEW BIELOBRADEK: “Matt comes from a great club program out of Chicago. He’s got really nice lines in his diving which makes his twisters spectacular. There’s a lot about Matt’s diving that reminds me of one of my previous divers, Mike Murphy, who was very successful at St. Bona. I’m really looking forward to working with Matt and all the great things to come from him.”

Please look at Joey Shine from the WoodlandsTexas. Grandson of Joe Shine SBU class of 60. Joey is currently a high school junior