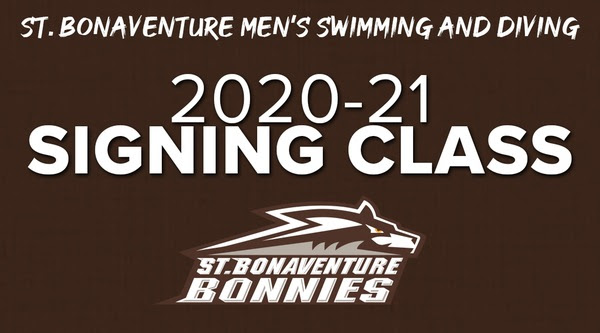 “This is a large but very talented recruiting class,” St. Bonaventure coaches said. “We knew we had big shoes to fill with the seniors that we graduated this year and are very proud of the class we have put together. This class will add depth to almost all our events across the board and they will also continue to add to our already very diverse roster. Beyond their talents in the pool and on the boards, we fully believe their personalities and work ethic will immediately mesh with our returners. Each and every one of these guys will bring another unique aspect to our team and we are looking forward to getting them on campus. With this being a large group, we expect next year will be a lot of fun.”

Andy Zhu travels from Brisbane, Queensland, Australia to join the Bonnies after swimming at Brisbane Boys College. In the pool, Zhu is an eight-time Conference Champion and was a three-time selection as the Brisbane Boys College Swimmer of the Year. Academically, he earned academic excellence all four years of high school. Zhu was also a member of the cross country team. He plans to major in finance at St. Bonaventure.

Joining the Bonnies from Syracuse, N.Y. is Lucas Dekaney. He was a diver at Jamesville-Dewitt High School where he holds the school record in the six dive and 11 dive events. In state competition, Dekaney earned a seventh place at the 2019 NYSPHAA Championships. He intends on majoring in political science at St. Bonaventure.

Coming to St. Bonaventure from Hauppauge, N.Y. is diver Sean Rorke. He competed for Hauppauge High School and holds the school record in the six and 11 diving events. O’Rorke placed 10th in the NYSPHSAA State Championship meet and also was a three-time varsity volleyball county finalist.

Jaxon Kaster swam in butterfly and individual medley events for Johnston High School in Dallas Center, Iowa. He earned multiple top-10 finishes at the Iowa State Championships and also was a YMCA Nationals qualifier in multiple events. Kaster was a six-time selection to the all-conference team and was a multi-time member of the conference all-academic team. He plans to major in marketing upon arrival at St. Bonaventure.

Kyle Gluck joins the Brown and White from Bay Village, Ohio. He competed for St. Edward High School in freestyle events and has broken five school records. Gluck earned All-Ohio honors in the 100-freestyle after an eighth place finish in the event at the Ohio State Championships. He also earned ninth place finishes in the 50-freestyle in back-to-back years and was named a team captain as a senior. Gluck comes from a swimming family as his mother swam at the University of Miami (OH) and his brother swims at the College of Wooster. Gluck intends on majoring in business at St. Bonaventure.

Joining the Bonnies from Penfield, N.Y. is Maxwell Murray where he swam distance freestyle, backstroke and individual medley events at McQuad Jesuit. Murray earned an eighth-place finish in the 100-backstroke at the state championship meet and was the team captain of his high school as well as his club team. Murray was also a Scholar Athlete at McQuad Jesuit. At St. Bonaventure, he plans to major in accounting.

Michael Pietrucha continues a family tradition of swimming at St. Bonaventure. A native of Denville, N.J., his brother Jack ’19 was a four-year member of the program. Michael Pietrucha competed for Seton Hall Prep where he is a member of the school program record holding 400-freestyle relay team. He also earned Super Upper Essex Conference First-Team honors twice and was also the recipient of the NISCA State Top-16 Award in the 400-freestyle relay as well as the 200-medley relay. Pietrucha intends on majoring in sports media at St. Bonaventure.

Joining the Brown and White from Ottawa Hills, Ohio is Patrick Heldreth. He competed in sprint freestyle events for St. Francis de Sales School. Heldreth was a two-time all-American and was a two-time selection to the All-Ohio Team. Heldreth also participated in water polo in high school.

Teddy Murphy competed in the breaststroke events at Fairview High School in Erie, Pa. Murphy was a three-time All-District First Team selection, a two-time All-State First Team and is a two-time medalist at the Pennsylvania State Championship meet. Murphy will double major at St. Bonaventure, majoring in mathematics and finance.

Coming to St. Bonaventure from Montclair, N.J. is Tommy White. He swam in freestyle and butterfly events at Monclair High School where he also was a three-time winner of the Monclair swimming Most Valuable Performer. White was a member of the All-Conference First Team in 2019 and 2020 while being named to the second team in 2018. He was the Super Essex Conference Champion in the 100-butterfly in 2019 and was a member of his club team’s record breaking 400-medley relay team. White also earned a fourth place finish in the 100-butterfly at the NJS Senior Championships in 2019. He intends on majoring in business management at St. Bonaventure.

Jeffrey Settlemyre joins the Bonnies from Wilmington, N.C. Settlemyre swam in freestyle, backstroke and butterfly events for John T. Hoggard High School where he served as the team captain. He was named the North Carolina Mid-Eastern Conference Swimmer of the Year after winning the 100-butterfly and 100-backstroke at the NCHSAA AAAA Eastern Regional Championships. At the NCHSAA State Championship Meet, he finished third in the 100-backstroke and sixth in the 100-butterfly. He intends on majoring in biology or entrepreneurship at St. Bonaventure.

Joining the Bonnies from Lockport, N.Y. is Mark Crocker. He competed in butterfly and freestyle events for Lockport High School where he owns school records in the 100-butterfly, 100-freestyle and the 50-freestyle. Crocker was a three-time qualifier for the NYS Championship Meet and finished third, earning a bronze medal in the 100-butterfly in 2020. Academically, he is a member of the National Honor Society. Crocker intends on majoring in business administration finance at St. Bonaventure.

Zyad Morsy comes to St. Bonaventure from Cairo, Egypt where was a diver for Manaret el Eman Language School. At the Egyptian Junior National Championships he won first place in the 1-meter dive and earned third place in the 3-meter dive. Morsy plans to be an accounting major at St. Bonaventure.