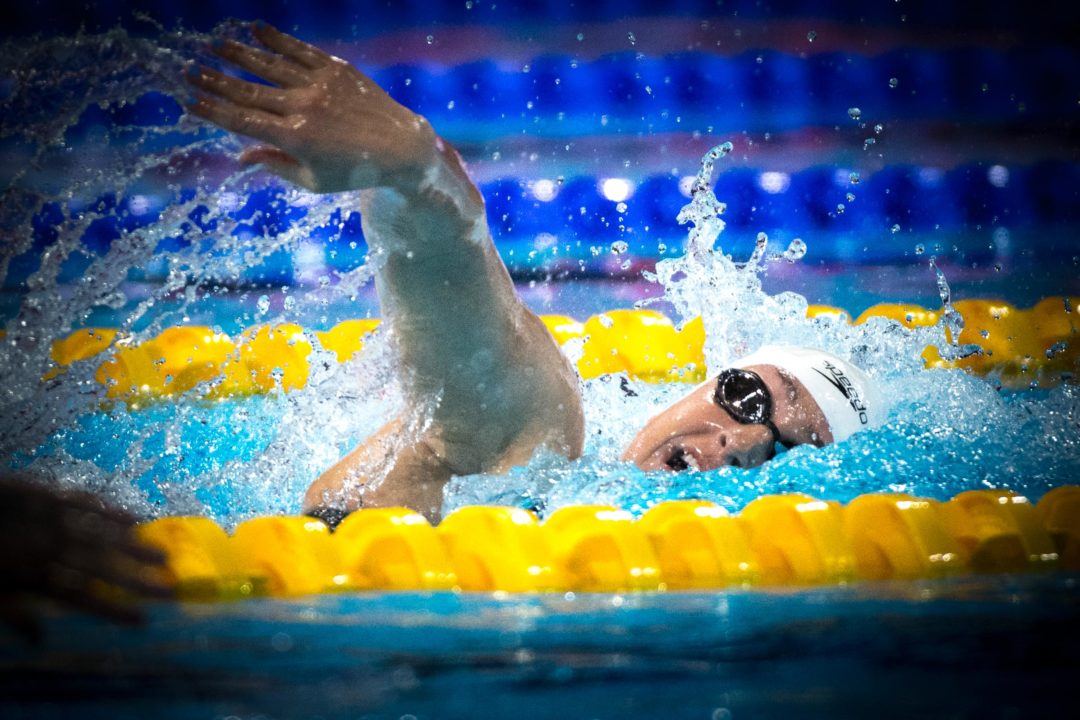 The Virginia Cavaliers hit the road on Saturday, as the men and women both took down ACC rival UNC. Distance standout Leah Smith once again swept her individual triple Archive photo via Mike Lewis/Ola Vista Photography

After taking down a Pool Record in the 200 back against Duke on Friday, Virginia’s Brendan Casey took the reigns in that event again on Saturday. He nearly matched his time from the day before, winning with a quick 1:46.10. Teammate Ted Schubert impressed with a sweep of the butterfly races, clocking a 48.50 in the 100 fly and a 1:47.21 in the 200 fly.

“This was a strong day for our teams,” UVA head coach Augie Busch said. “We were significantly better than yesterday in most areas and I credit our focus as the main reason. The men and women were on a mission today and it showed from the moment they walked on the pool deck. I am proud of their effort. We’re looking forward to racing some of the best swimmers in the country next weekend at NC State.”

Virginia started and ended the day strong, winning three of the four relays outright (women’s 200 medley and 400 freestyle and men’s 200 medley) and tying for the win in the men’s 400 free relay.

“We had a very good showing by our divers today,” UVA head diving coach Jason Glorius said. “We really improved upon yesterday’s results and put together some clean lists.”

The Cavaliers return to action next weekend when they compete at NC State on Jan. 28 at 4 p.m.

CHAPEL HILL, N.C.  –  The North Carolina men’s and women’s swimming and diving teams returned to Koury Natatorium for the first time since October 7, falling short against a pair of nationally-ranked teams from the University of Virginia.

UNC’s divers were stellar again as they swept all four events.  For the women, Elissa Dawson won the three-meter with 354.08 points and she captured the one-meter event with 309.68.  Senior Jack Nyquist swept the men’s boards, scoring 357.85 in one-meter and 394.73 in three-meter diving.

For the men, senior Jorden Merrilees continued his excellent season by winning the 200 free in 1:37.61 and the 500 free in 4:26.67.  In the latter race, he touched out teammate Henry Campbell by just one one-hundredth of a second.  Junior Craig Emslie won the 100 breaststroke in 54.64 and the Tar Heels made a sweep of the breaststroke events when Michael McBryan captured the 200-yard event in 1:59.79.

“We had a lot of things that were trending positively today,” said UNC head coach Rich DeSelm.  “UVA’s women are a Top 5 team in the country. Their men have a historically successful program. We’ve had some great battles with them. I had hoped that we might have the better battle with them today.

“We’ve got to keep the long view, and keep working on what we need to work on. We’ll get back Monday and look forward to next week when we have two more big opponents. Duke is a much improved (Saturday at 1 p.m.) and the NC State men and women are Top 10 teams (Friday at 5 p.m. in Raleigh.  We have a big week ahead and some great opportunities.

In his post-meet comments, DeSelm highlighted the work of transfer Jorden Merrilees and well as the consistency of UNC’s diving corps.

“Jorden’s extremely talented. It’s a bit of an unusual situation with a first-year swimmer here being a senior. Jordan missed by just hundredths of a second making his 2016 Olympic Team for Australia. He has brought talent and a great work ethic to us and he is a veteran and a great racer.  He knows how to get his hand on the wall which you saw today in winning those close races.”

Carolina swims in Raleigh Friday against NC State at 5 p.m.  The Heels will host Senior Day next Saturday at 1 p.m. with pre-meet festivities starting at approximately 12:30 p.m.

TOP CAROLINA FINISHERS IN EACH EVENT—WOMEN

TOP CAROLINA FINISHERS IN EACH EVENT—MEN

UNC has won one duel meet this year, against Navy…..rough. ONE. UNC women were without a couple really good girls…would have made meet a little closer, but outcome the same UVA men (despite all the bitter Bernadino lovers) continue to rise. They will be back soon enough. Only took 3 years to rebuild and beat UNC again (part of that is UNCs continuing collapse though) ACC Womens: Without Maroney who has not swum second semester, you have to think NC State is in the driver seat for the womens championship: Predictions: 1.NC State 2/3 UVA/Louisville – very close. 4.For first time ever maybe, UNC at 4th 5. FSU – getting better quickly. 6. Duke – also getting better quickly ACC… Read more »

While NC State is on the rise on the women’s side, I still think UVA will defend their title for at least one more year. NC State is still lacking too much depth in the breaststroke, butterfly, and IM events to upset UVA.

I tried to make this post twice at work and it wouldn’t go through. I think UVA men continuing to rise is a nice way to spin things. The question for me, is will they reach their once past greatness again? Who will be the next Scot Robison? Matt McLean? Because, I do not see them winning ACCs anytime soon.

You have to remember the ACC is not what it used to be. There’s no question the overall strength of the conference has increased exponentially; the NC State teams of the last two years and this year would have blown out the top Virginia teams of the past decade. I agree they are on the rise and I could see them winning in the next few years actually. It will be anything but easy though.

Well Robison and McLean were as good as anyone on NC State. Remember both were 1:32 200 free and McLean went 4:10

Yes, people forget how fast the ACC has become. Plus the addition of Louisville and Notre Dame just made it that much harder. That’s a good thing though. The Big 12 is extremely weak and on the opposite spectrum compared to the depth of ACCs. But, my point remains. UVA men were at the top when Dino left/kicked out/whatever. We’ll never know if they would have remained at the top if he was still there.

John Whiteside is the next Scot Robison