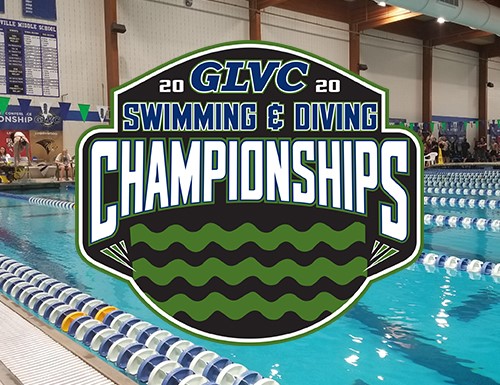 On an exciting and record-setting first day of the 2020 GLVC Swimming and Diving Championships, Drury University leads both the men’s and women’s competition. Current photo via Great Lakes Valley Conference

CRAWFORDSVILLE, Ind. – On an exciting and record-setting first day of the 2020 GLVC Swimming and Diving Championships, Drury University leads both the men’s and women’s competition, as six records were set on Wednesday at the Crawfordsville Aquatic Center in Crawfordsville, Indiana, February 12.

The Panthers hold a slim three-point lead on the men’s side, while the Lady Panthers have just a six-point advantage in the women’s race.

Eight GLVC champions were crowned Wednesday, with five of those race winners setting new league standards, while a sixth record was broken in the morning preliminary session. Additionally, four of those also met or exceeded NCAA Division II top times.

To begin the day, McKendree sophomore Gregg Lichinsky broke the pool record and his teammate Xander Skinner’s 2019 mark of 19.85 by touching the wall at 19.73 in the 50-yard Freestyle – all before noon. That time also matched the fastest in Division II this season. Lichinsky would go on to win gold in the finals heat later that evening but was .02 seconds shy of matching his earlier clip. His record did, however, surpass a NCAA Division II A-cut Qualifying Standard by .03 seconds. In the women’s 50 Free, Drury freshman Kasia Rogowska won gold by clocking in at 23.10 to reach a NCAA B-cut Standard.

The 200-yard Individual Medley saw Drury senior Bailee Nunn win for the third occasion in her career, as this time it took 2:00.63 to earn gold and a NCAA B-cut. On the men’s side, Panthers sophomore Andrew Rodriguez registered a new GLVC record of 1:47.33 to also best the previous pool record and tally a B-cut.
Beginning the evening finals session with the 1000 Free, fans were treated to a pair of record-breaking performances. Drury senior Erica Dahlgren started it off by besting her own 2018 record (9:55.69) in a pool-record time of 9:54.37 for gold and an A-cut mark. Not to be outdone, though, McKendree freshman Fabio Dalu swam a sub-9 8:58.36 for the new Conference and pool standard. That time is also now the best in D-II this season by more than 11-seconds and far surpasses the A-cut standard of 9:04.90.

In the last event of the day, the 200-yard Medley Relay, the Drury women (1:40.45) hit a B-cut and both a GLVC and pool record for the gold, while that performance was also the fastest in D-II this season. The men followed with another record-setting effort, as McKendree swam 1:26.31 for the new league and pool record as well as a B-cut. The Bearcats also get credit for the top time in D-II.

In addition to handing out the 1000 Free and 200 IM medals this evening, the league also recognized 16 GLVC James R. Spalding Sportsmanship Award honorees. The student-athletes chosen are individuals who have distinguished themselves through sportsmanship and ethical behavior. These individuals must also be in good academic standing and have demonstrated good citizenship outside of the sports-competition setting. The honorees are now eligible to become one of their school’s two Spalding Sportsmanship Award winners, which will be announced at the end of the academic year. The complete list of men’s and women’s swimming and diving honorees can be found below.

Day two of the GLVC Championships begins Thursday with preliminaries of the 400 IM, 100 Butterfly, and 200 Free, beginning at 10 a.m. ET. Limited bonus coverage of the preliminaries will begin at 9:45 a.m. on the GLVC Sports Network, while full coverage begins at 1:15 p.m. for women’s 3-meter and men’s 1-meter diving, followed by swimming finals at 6:15 p.m.

For complete results and more information, log on to GLVCsports.com/2020swim, and watch complete coverage live and free on all GLVCSN platforms, including GLVCSN.com, GLVCSN iOS/Android mobile apps, and GLVCSN OTT apps on Roku, Amazon Fire TV, Apple TV and Android TV. Fans can also follow the championship coverage on Twitter via the hashtag #GLVCswim and #GLVCchamps.