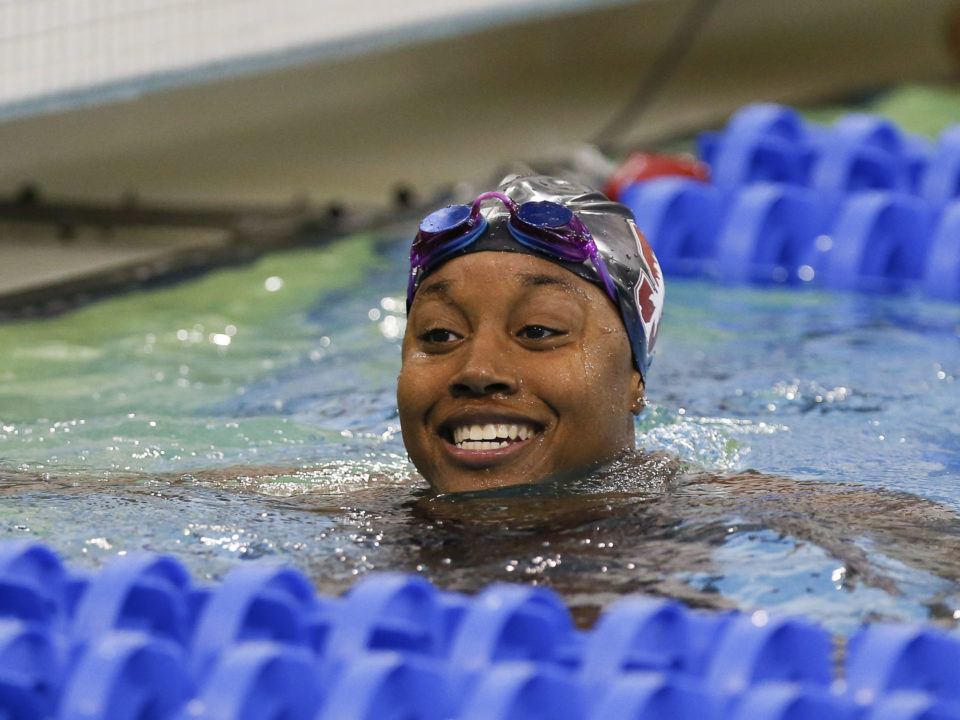 Manuel is the 10th Stanford Cardinal to win the award. Archive photo via Tim Binning/TheSwimPictures.com

The award, whose nominees are selected by a panel of coaches from the CSCAA, honors the best female swimmer or diver (though it’s always a swimmer) for the preceding NCAA season.

After battling a hip injury that kept her out of competition for most of the regular season, Manuel made up for lost time in the post-season. She added 6 NCAA titles in her last championship meet, bringing her career total to 14. That included victories in the 50 free (21.18) and 100 free (45.65) that just missed her own all-time bests in those races. She also swam on Stanford’s winning 200 free relay, 400 free relay, 200 medley relay, and 400 medley relay, which included 3 new NCAA Records.

“Although I am the individual receiving this prestigious award, it would not be possible without the support of my family, incredible teammates, amazing coaches, and the outstanding support staff at Stanford, who push and support me every day to be my best, ” Manuel said. “Our team had a historic championship season this year, and there’s no better way to represent all that my team stands for than to cap it off with this award as ‘the best of the best in collegiate athletics.'”

Cal ranks 2nd all-time with 10 wins. Indiana has never won the honor, though Lilly King has been nominated in each of the last 2 seasons (she’s the only Indiana swimmer ever nominated).

Ledecky won the award last year as a freshman after winning 3 individual NCAA event titles (including a tie in the 200 yard free), even though Cal’s Kathleen Baker won the NCAA Championship Swimmer of the Meet award from the CSCAA. The winner is decided after voting by NCAA member institutions, with each school receiving a vote.

As the winner of the swimming-specific award, Manuel now moves forward to contend with the winners of 12 other sports for the Honda Cup, which Ledecky won last year.

Though she has a year of collegiate eligibility left after redshirting her sophomore season, Manuel confirmed after NCAAs that she is turning pro. Ledecky recently announced she will join her.

As someone who said the award should go to Simone, let me explain why. It was now or never for Manuel and Ledecky–and Ledecky got the award last year. These were two best swimmers for the past two years with a possible argument for King–but King could get the award next year.

Is this a career award? How can this be justified. The three other candidates were arguably much better than Simone. Ella with 3 American records and Lilly with 2 and Katie as reliable as ever. While Simon is a world class athlete and a very talented swimmer, she was not the BEST COLLEGIATE swimmer this year.

So, do you think you were better and should have gotten the award?

How does this make “Question” a hater? He/she said why they believe Ella and Lilly had better outcomes this year compared to Manuel. This award is based on opinions any way, and 2 people that broke American records vs the actual winner of the award is a valid argument. Manual had a better year LAST YEAR

They are all great swimmers. Simone was reliable as ever also! She got it done individually and on the relays (Simone on 4 relays wins, Katie 1 relay win, Ella 2 relay wins) along with individual swims. One thing people tend to overlook is Simone’s value on relays, as well as individually. Without Simone, there are at least 4 relays Stanford would not have won. Of the 4 nominees, she was just as valuable and won 2 individual events….same as Katie and Lillie, and she was the most valuable relay swimmer. She is also still the only American female under 46 seconds in the 100 free. And this was done on less than 3 months of full training due to… Read more »

It is not just a matter of how many relay wins a swimmer gets, Manuel was the best swimmer in both of her freestyle relays, and probably the second best after Lilly King in the medley relays.