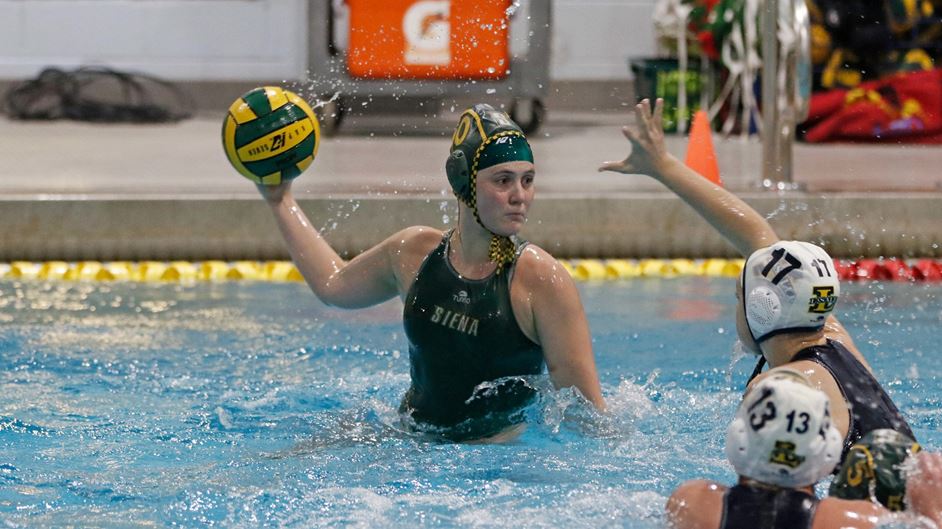 The Saints took an 11-10 victory over MAAC foe VMI, before falling in a 20-11 decision to #15 Wagner. Current photo via Lexi Woodcock

LOUDONVILLE, NY – Just after honoring their two seniors, Siena Water Polo (4-17, 1-7) got back in the win column to begin what was a Senior Day split at the Siena Swim Center on Saturday. The Saints took an 11-10 victory over MAAC foe VMI, before falling in a 20-11 decision to #15 Wagner.

Looking to erase a 12-game losing skid in its third straight weekend of home competition, The Saints scored three of the first five goals, but trailed, 4-3, at the end of the opening quarter. The Keydets also held a 6-5 lead at the half, but fell victim to short handedness in the second half.

In a match which featured 23 total exclusions, VMI lost three players and ended the match playing a woman down, which allowed the Saints to storm back from a three-goal fourth quarter deficit and net five of the game’s final six goals down the stretch. Three of the Saints’ final five goals came on the power play, with the team earning its first victory over VMI since 2014.

Siena’s two seniors, co-captains Bianca Prinsloo and Georgia Vargas, each recorded hat tricks in the win, with Prinsloo’s four scores leading the team. Freshman Ashley Chand found the back of the net twice, while junior Lily Graham and freshman Emma Nosenchuck each scored once. Junior Anna Mossakowski picked up six saves in three quarters of action in-goal, while sophomore Caroline Behr made a pair of saves as well in eight minutes in-goal.

The Saints took the pool later in the afternoon for its third meeting of the season against the nationally-ranked Seahawks, who took home six straight MAAC titles before opting out of play last season. Wagner immediately established itself with a 5-2 lead after a quarter and a 9-4 halftime advantage.

Following a 5-2 Wagner quarter in the third, Siena’s offense came to life in the final eight minutes of play, combining for five goals to enter double-figure scoring against Wagner for the first time since 2011. Siena’s 11 goals are tied for the second-most the program has put up against its MAAC counterparts, who improved to a perfect 9-0 in conference play this season.

Prinsloo recorded her second hat trick of the day to steady the team offensively, while Chand put forth two more goals and six other Saints got on the board with a score. Mossakowski tallied nine saves in 22 minutes of action, while Behr recorded one save in 16 minutes in-between-the-pipes.

Siena will continue a crowded conference weekend with a road doubleheader on Sunday, taking on Villanova at 11:30 AM and La Salle at 5:30 PM in the Philadelphia area.