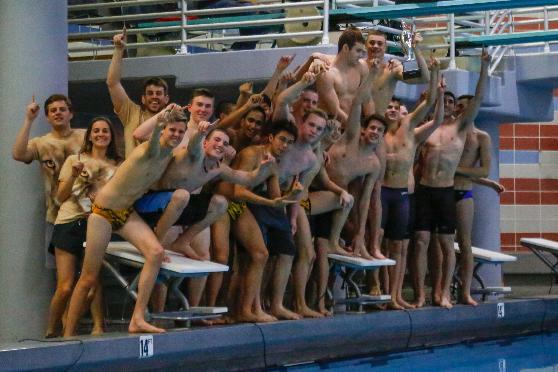 Texas commit John Shebat went lifetime-bests in the 100 back and 200 IM to lead Oakton to the region title for boys. Current photo via John Shebat

Virginia High School swimming keeps chugging along, with the 6A Northern region wrapping up on Saturday night.

The backstroke was equally impressive, with Shebat cracking 47 seconds for the first time in his life. His 46.71 was an incredibly impressive swim, topping the 46.76 that Shebat’s future Texas teammate Jack Conger put up his senior year of high school.

But Langley’s depth pulled through to bring home a team title.

Welcome to the family… Hook’em Horns!!!

Both of Shebat’s times are NCAA B standards, and that 100 backstroke was within 0.2 of what it took to get an NCAA invite last year. Meanwhile, Robinson’s Jameses (???) looked poised to sweep the freestyles at states once again. Jones is already one of the top junior sprinters in the country, and I wouldn’t be surprised if Murphy also ends up being one of the top recruits in the class of 2016. The 6A championship is going to be another fun one.

The Robinson Rams Boys have a legacy of great and dominating teams (a ridiculous number of state championships in their trophy case). However, this team, led by Juniors James Jones and James Murphy, are a team that could possibly be their best. Not only are they fast, they are great young men (a reflection both Jones and Murphy’s character). Go OHS Cougars!

Texas is so deep that they already have the depth to replace Darmody and Youngquist on the relays. But Haas should replace Youngquist’s individual points, and it looks like Harty and Shebat should help replace Darmody’s points. All that to say, I agree with you. It’ll be interesting to see if Cal or anyone else can match them.