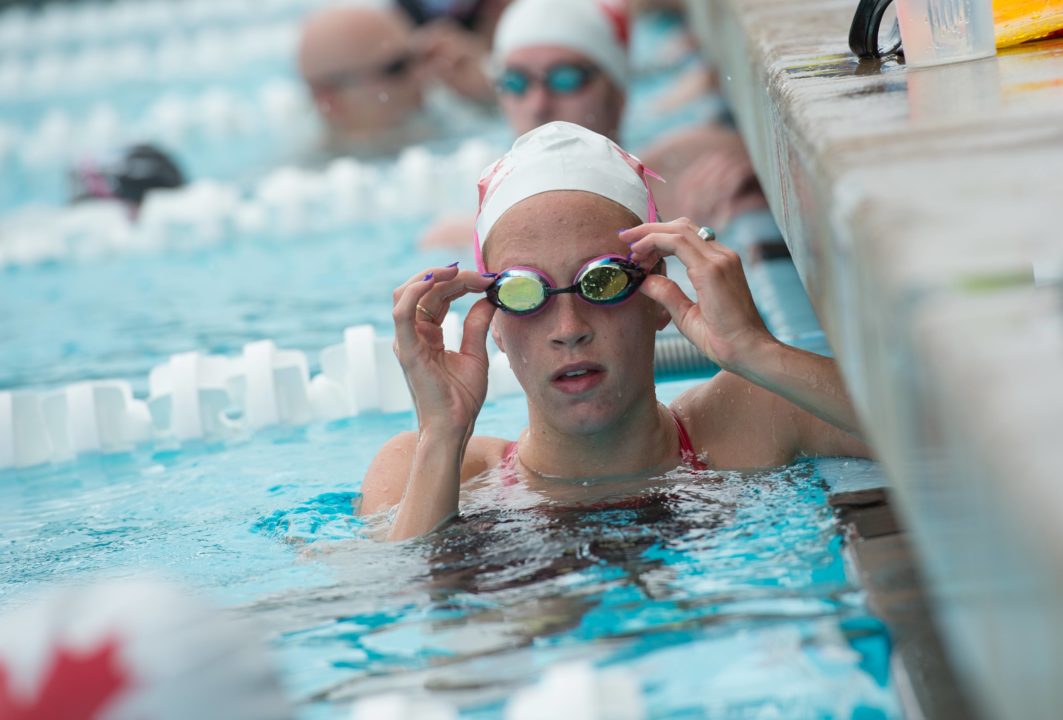 The women's 200m backstroke final should be a quick one as there's a lot of depth in that field. Taking the top spot was Hilary Caldwell who swam a 2:10.82. Archive photo via Mike Lewis/Ola Vista Photography

Tabitha Baumann swam a 4:13.86 in the 400m freestyle this morning to get the top spot heading into finals. Savannah King through down a 4:14.44 to grab the other middle lane for finals.

The final should be one of the most exciting of the night with tons of experienced Canadian swimmers taking to the blocks. Brittany MacLean who just won the 500y freestyle in a new NCAA records a few weeks back at the NCAAs swam a 4:14.46 this morning. She’s the Canadian record holder and after a win in the 200m freestyle she should be the favorite.

Samantha Cheverton, Barbara Jardin, and Alyson Ackman will all be in tonight’s final as well. MacLean, Cheverton, Jardin, and Ackman were all named to the Commonwealth Games/Pan Pacs roster.

Ryan Cochrane will head into the men’s 400m freestyle final as the man to beat. This morning he clocked in at 3:51.09 which was just off of his season best time.

Peter Brothers swam a 3:55.79 to take the second spot behind Cochrane.

Alec Page who won the 400m IM last night grabbed the third spot. He should be a major factor and possibly put up a fight with Cochrane like he did in the 200m freestyle final on night one.

Savard swam a 58.13 to post a season best. She finished ahead of Thomas in the 50m fly earlier in the meet, already showing her speed.

Lacroix posted a 59.22 to take the second spot. She’s better known for her 200m fly, but you could very well see all three girls qualifying tonight.

Thomas was a 59.46 this morning, but you can expect her to be a lot faster. She’s been consistently posting 58-mids at meets this season in hard training, so considering she’s most likely fully tapered she should be able to post a time a lot faster than what she did this morning.

Coleman Allen expectedly grabbed the top spot in the 100m fly with a 53.35 this morning. Evan White grabbed the second spot in 53.60.

Don’t count out Zack Chetrat who was on last year’s 2013 World Championship roster. Chetrat qualified fifth with a 54.67.

The women’s 200m backstroke final should be a quick one as there’s a lot of depth in that field. Taking the top spot was Hilary Caldwell who swam a 2:10.82. Caldwell spoke with us earlier in the week and stated that she’d be happy with a time under 2:10. She’s set herself up perfectly to achieve that tonight.

Dominique Bouchard, Sinead Russell, and Brooklynn Snodgrass should also be quick in tonight’s final. With the depth in this field look to see possibly two or three qualifying for the team in this event.

Matthew Swanston, Russell Wood, and Matthew Myers should create a pretty competitive final in the 200m backstroke. The three qualified in that order. Last year, Wood represented Canada in the backstroke events at Worlds, so he should be the favourite.

Swanston and Wood were within 0.10 seconds of each other, so that should shape up to be quite a race tonight.

The women’s 50m breaststroke will feature many of the same swimmers as in last night’s 100m breaststroke. Fiona Doyle took the top seed in 31.32

Ashley McGregor tied with Rachel Nicol for the fourth seed with a time of 31.94. Tera Van Beilen will also be in the final, taking in the seventh seed.

Winner of the 100m and 200m breaststroke, Richard Funk, grabbed the top seed with a 27.86. He’s been miles ahead of the competition in the breaststroke events at these trials, so look for him to complete the sweep tonight.

Andrew Poznikoff’s 100 free split in the 400 at the end of the session was also note worthy, especially for a breaststroker.

The women’s 400 should be a great race tonight. It’d be cool to see Ms. Baumann make her way onto the team, but there’s a lot of talent and experience in that field.

On the men’s 400 side, I’m really hoping that Jeremy Bagshaw can pull out a great swim. The Canadian men who swim at NCAAs are at such a greater disadvantage with the back-to-back weekends of racing, but hopefully this race will be the sweet spot for him to make the team. I imagine Cochrane will play with the field for a bit and do whatever he needs to do to make the team.