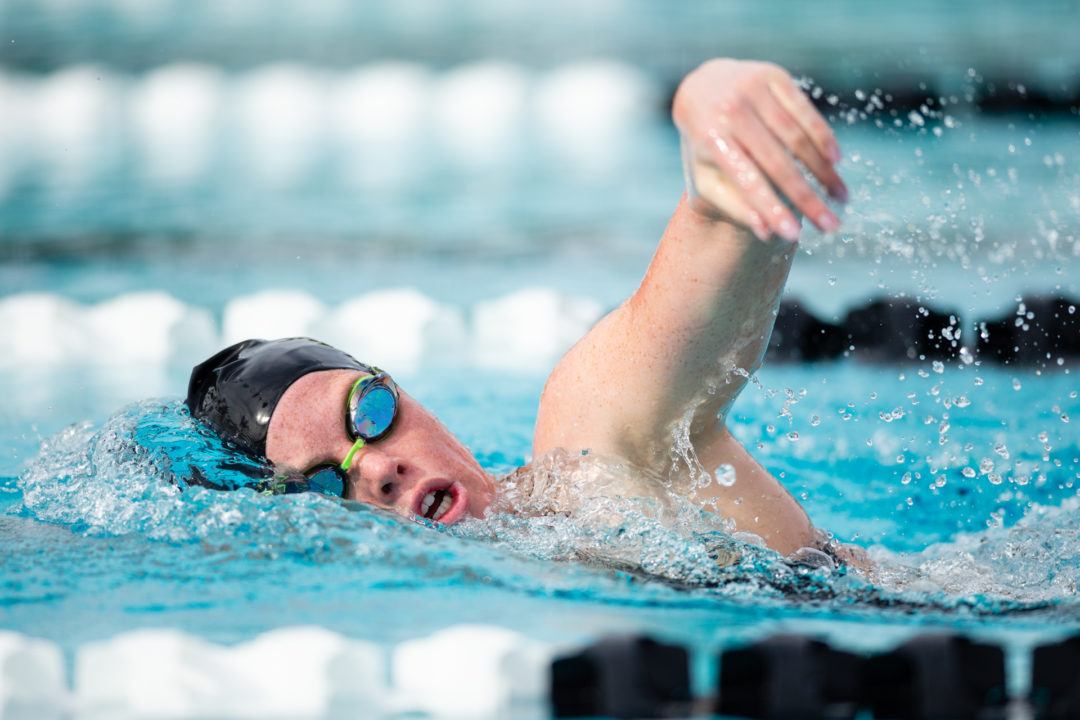 LOS ANGELES –  The San Diego State swimmers capped an undefeated run through dual meet action on Saturday, defeating Loyola Marymount 124-103 at the Burns Aquatic Center on Saturday afternoon. Heading into the Mountain West Championships beginning on Feb. 20, the Aztecs are a perfect 13-0 and have finished their fourth undefeated dual-meet season in the last six years.

The Aztecs posted the fastest time in all 14 events and posted the first and second best times in 13 races. SDSU kicked things off with a win in the 200 medley, as Ava Howard, Klara Thormalm, Elli Ferrin, and Larisa Tam teamed up for a first-place time of 1:47.80 — less than a fifth of a second faster than SDSU’s Alma Thormalm, Caitlin Delaney, Courtney Vincent and Morganne McKennan, who finished second at 1:47.99.

Klara Thormalm claimed the 100 breast crown with a time of 1:03.73 while McKennan and Ferrin made it back-to-back races with the Aztecs claiming the top three spots after posting times of 1:05.04 and 1:07.47, respectively.

Alma Thormalm and Peyton Wilson posted standout performances in the 100 free, recording tightly-knit times of 52.93 and 53.25 for first and second place.

Howard, Felix, Kelch, and Maude Boily-Dufour recorded dominating performances in the 200 back, finishing first through fourth, respectively. Howard claimed the first-place spot at 2:11.12, while Boily-Dufour finished fourth at 2:15.95 — nearly 12 seconds ahead of Loyola Marymount’s top finisher in the race.

FLAGSTAFF, Ariz. –  The San Diego State divers claimed the Northern Arizona Diving Invitational title on Saturday, outscoring both Northern Arizona (101) and Idaho (76) with 132 points. Ximena Lechuga Gonzalez led the Aztecs throughout the competition, recording 32 individual points to finish in a tie for second among the 16-diver field.

In 3-meter action, Lechuga Gonzalez finished third with a two-round score of 581.95. Marie Yacopino finished sixth in the event, recording a score of 527.20.

To conclude the event, Lechuga Gonzalez posted the fourth-best platform board score in school history with a 244.90 to finish in second. Cazares placed third at 224.70, while Delaney Gallagher also recorded a top-five score with a score of 217.00.

Lechuga Gonzalez finished the meet as the only diver to finish in the top three on all three boards.

NOTES
– SDSU improves to 71-2 in dual meets since January 13, 2013.
– The Aztecs recorded their fourth undefeated dual meet season in the last six years.
– Including SDSU’s two swimming invitational meets (the Chic-fil-A Invitational and Mizzou Invitational), only three teams during the entire regular season beat the Aztecs. Those teams include No. 4 California, No. 19 Missouri, and Arkansas, which is the top team receiving votes in the CSCAA national top 25.

UP NEXT
SDSU awaits the Mountain West Championships in Minneapolis, Minn. that run from Feb. 20-23. The Aztecs are searching for their first MW title since 2015 and aiming for their 10th consecutive top-three finish.

The Loyola Marymount Swim team jumped into the pool at Burns in high winds and heavy downpours on Saturday to compete against San Diego State University in their last home meet of the season. Due to the conditions coaches from both sides agreed to eliminate the 1000-yard freestyle while running the other events quickly with swimmers from both teams remaining in the pool between events.

According to Lions Head Coach Bonnie Adair, “The weather was so extreme, we normally might have cancelled the meet. Instead, we decided to make it ‘fun’ primarily to allow our seniors their last competition in our home pool and to honor their families who bravely endured the elements. It was absolutely crazy but ‘in a fun’, team bonding sort of way.”

The Lions were strong in competition all meet long but the day wasn’t about results, it was about the seniors. “This truly was one of our top classes in my sixteen-year coaching here at LMU. Not only athletically, but in all they have contributed and achieved outside the pool. It will be exciting to follow their continuing success as they leave campus and move forward with their careers” said coach Adair. Following the competition, the team honored the accomplishments of their eight seniors at a post meet ceremony.

The LMU swimmers will conclude their season at the PCSC Conference Championships, February 13-16, at the La Mirada “Splash” Aquatic Center.