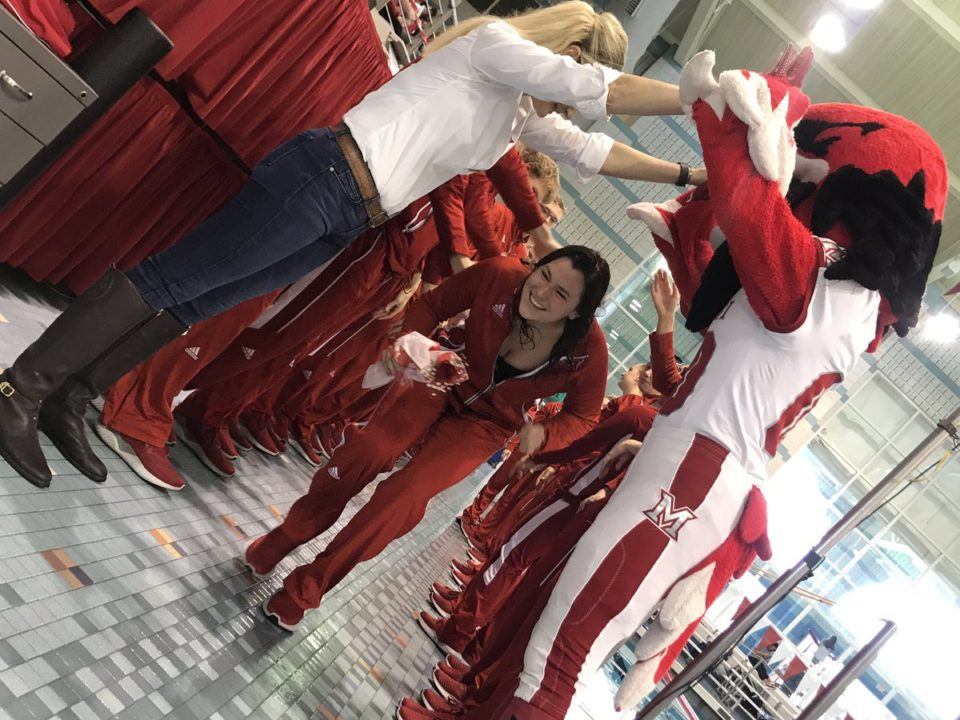 OXFORD, Ohio – The Miami University swimming and diving program dominated start to finish in a dual meet versus Xavier on Saturday afternoon on Senior Day. The women won 234-56, while the men captured a 239-55 victory over the Musketeers.  The divers competed in an intrasquad meet.

Both the Miami men and women finished first in the 400 medley relay. The winning women’s teams was made up of Izzy Herb, Hannah Fuchs. Kayleigh Cannon and Camila Lins Mello while James Wray, Noah Barr, Kayky Mota and Diego Valentim swam on the winning men’s team.

Miami was strong in distance, with all RedHawk swimmers finishing before Xavier swimmers on the women’s side and the men’s side of the 1000 free. Bia Dizotti and Emma Bradley were the two-fastest among the women. Brandon Crist, Austin Theobald and James McGuire finished first, second and third, respectively, for the men. In the 500 free, Duda Seifer, Molly Zilch, Bradley and Claire Doerr finished with the four-fastest women’s times. Crist won the 500 free for the men with Gordon Wheeler and Theobald finishing second and third, respectively.

Sprint free was no different as Miami continued to dominate in freestyle. In the 50 free, Nic Wamsley, Ward and Chase Bettner were the top-three men’s swimmers and Lins Mello and Ella Moynihan were the top-two women’s swimmers. Lins Mello won her third freestyle event of the meet in the 100 free as Moynihan again finished second. Wamsley also won the 100 free, followed by Valentim in second and Ben Chatwin in third.

The 200 fly saw the Miami men in the top-three spots and the Miami women with the top-two times. Mota, Spencer Klinsky and Ryan Sego finished first, second and third, respectively for the men while Cannon and Herb were the quickest on the women’s side. In the 100 fly, Cannon, Abby Stone and Allison Pierce finished with the three-fastest women’s times while Moussalem won the men’s competition.

The Miami women had another 1-2-3 finish in the 100 breast with Fuchs, Anna Martin and Anna Justinak finishing before any Xavier swimmers. In the 200 breast, the Miami women finished with the four-fastest times. Martin won, followed by Bryanna Renuart, Bri Alexander and Carolyn Jungers in second, third and fourth, respectively. Barr swept the breaststroke competition for the men. Blake Brockman and Sam Curran finished second and third, respectively, in the 200 breast.

Jake Precious and Wray beat out all the competition in the 100 back, finishing first and second, respectively. In the 200 back, Wray and Precious were once again in the top-two spots, with Wray getting the win. Herb won the 200 back for the women. Stone had the fastest Miami women’s time in the 100 back, good for second place.

The RedHawks wrapped up the day with two more relay wins. The senior women’s relay team of Pierce, Peyton Mosbaugh, Stone and Moynihan won the 400 free relay. Seifer, Herb, Justinak and Zilch finished second for the women. Ward, Valentim, Wamsley and Moussalem won the 400 free relay for the men.

Both the men and women have the week off from competition.

OXFORD, Ohio – Xavier swimming closed out the dual portion of its schedule at Miami (Ohio) on Saturday afternoon. The Musketeers combined for 15 top-three finishes, including an win in the 100 back for Caroline Gaertner, in the final meet before the BIG EAST Championships.

UP NEXT
Xavier takes a break from outside competition leading up to the 2019 BIG EAST Championships. The conference meet will be held in Long Island, N.Y., running from February 20-23, 2019 at the Nassau County Aquatic Center.