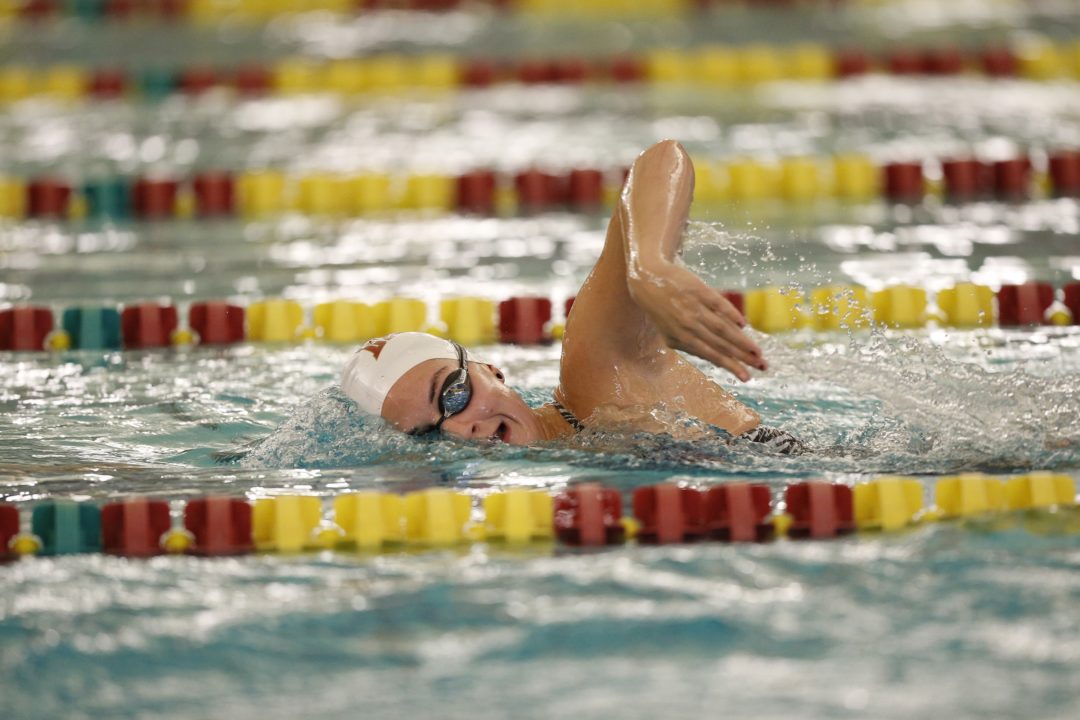 One of the most impressive aspects of the time is that it ranks her as the seventh best performer all-time in the 100 fly. Elaine Breeden and Beryl Gastaldello were ranked seventh prior to Corea's swim with 50.87s. Archive photo via Jamie Schwaberow/Rich Clarkson and Associates, LLC

Yesterday Sam Corea put up the second fastest 100 fly split of the day on Denver’s 4×100 medley relay and today she performed equally as well in the individual event.

After splitting a 50.51 100 fly, Corea was able to back that up with what is arguably a better performance. Corea was out in 24.06 and came back in 26.80 to drop a 50.86 and claim silver for Denver. With that time she beat USC’s Kendyl Stewart, and Cal’s Farida Osman to name a few.

That swim gave Denver their only points through two days of competition and puts them in the top 30 in overall rankings. Currently, Denver is sitting in 23rd with Corea’s 17 points.

The time also doubled as a school record, breaking the 51.62 mark she swam in 2014 by almost a full second. One of the most impressive aspects of the time is that it ranks her as the seventh best performer all-time in the 100 fly. Elaine Breeden and Beryl Gastaldello were ranked seventh prior to Corea’s swim with 50.87s.

The time ranks her ahead of swimmers such as Felicia Lee, Jenny Thompson, Marne Erasmus, and Kendyl Stewart.

Corea is slated to swim the 200 backstroke tomorrow where she’s going in as the 13th seed with a seed time of 1:52.68.She was seeded seventh going into the 100 fly and was able to move-up significantly in her placing. The possibility of another A-final appearance for Corea isn’t too far off.

Denver also will contest a 4×100 freestyle relay team on day three which Corea is presumably a member of considering that she’s the school record holder in the 50 free.

The Florida Gulf Coast University had never qualified a relay for NCAAS prior to this season, and in their first NCAA showing in the 200 medley relay, they managed to qualify sixth in the prelims making an ‘A’ final.

Just to put into perspective how impressive their swim was, the FGCU team beat teams such as Auburn, USC, and day one 400 medley relay champs Stanford.

Sophomore Kira Toussaint led-off the team in 23.91 which happened to be the second fastest backstroke lead-off other than Rachel Bootsma’s. Freshman Katie Armitage swam 27.34 on the breaststroke, Emma Svensson was a 22.77 on the fly, and Kristen Julien was a 22.12 on the freestyle.

Collectively the team threw down a time of 1:37.05 which was exactly half-a-second shy of taking the third seed.

Individually, Kira Toussaint qualified for the ‘A’ final in the 100 backstroke with a time of 51.73. The time was just slightly faster than her seed time, and gave her the eighth seed heading towards finals.