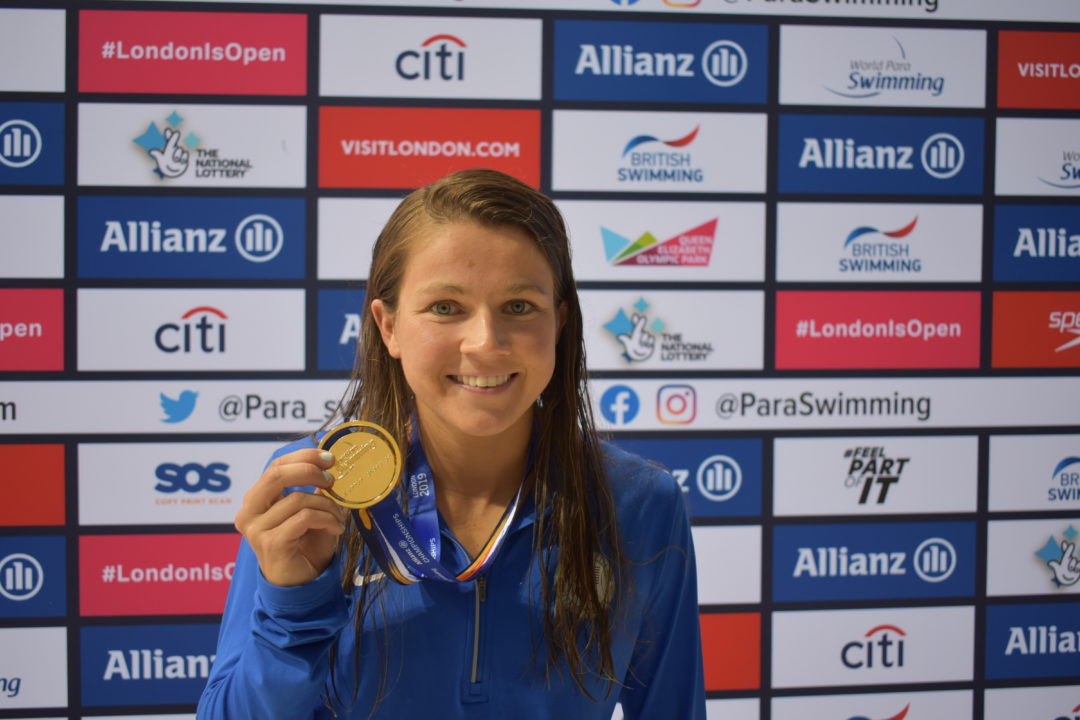 Meyers swam a WR in the S12 200 IM, taking silver in the mixed-class event, less than 30 minutes before her AR 100 free. Current photo via Nate Williams Media

Meyers also broke the world record in the S12 400 free earlier in the meet.

By the way, since there wasn’t a thread for today’s results, I wanted to share something astonishing here.

Brock Whiston won the SM-8 individual medley (incidentally again knocking off Jessica Long, who has to be feeling like there’s some kind of hex on her right now, but I digress). So far so good. Time was 2:35.30–a world record, but not insane; it’s a long way over the SM-9 and SM-10 records, and of course the able-bodied record is 2:06 low, so it’s not in the same league (as you’d expect when talking about swimmers with multiple amputations or significant paralysis).

Look at the splits, though, and you’ll see something crazy. Whiston was not the fastest in the butterfly; in fact,… Read more »

And the UK NGB and IPC will say “nothing to see here”.

… and the IPC will ignore all of this and carry on with the CP circus.

Unless she’s been living a carefully planned and coordinated disability fraud going back many years before she started swimming internationally, she’s got CP. You could argue she should be SM9 or SM10 but, again, that split was crazy regardless of classification.

You ought to cross reference her social media with her personal best times. It is quite obvious that the change in times correlates with the wearing of AFOs and shoulder braces over clothing. It is again quite obvious that her times dramatically return to her previous marks once she has secured her classification.
https://instagram.com/brock_whiston?igshid=150tqr04il17u
Individual Best Times (All Time) | Swim England
https://www.swimmingresults.org/individualbest/personal_best_time_date.php?back=individualbestname&name=Whiston&tiref=183320&mode=A&tstroke=8&tcourse=L

Probably incorrect to put Whiston in the same basket as Patterson, atm. Patterson who most definitely does not have Cerebral Palsy.

The concern with swimmers like Whiston though is the coaching behind the grandstanding – the walk,… Read more »

Is there underwater video of her breaststroke anywhere? I’d love to see it.

You really should do a piece on the para sport tier system.. and forgive me if you have already done so.(I obviously have not seen it). I’ve said this before, I think we need some sort of understanding to benchmark the performances of para-related stories that are posted. Thanks!

We did one a few years ago, and have done some updates since. Part of the problem is that at this point, I don’t think that anybody really understands the system and where the lines are being drawn.

Beyond that, it’s sort of a holistic measure of how severe the impairment is. Unlike in some other sports, notably track and field, different types of disability are not parsed out, so you can have one swimmer with an amputation, another with cerebral palsy, a third with short-limbed dwarfism, and a fourth with paralysis all in the same race.

This system is extremely vulnerable to errors and, sometimes, outright fraud, but it’s debatable whether there’s a viable alternative. Track and field just has more athletes, so they can break up the classifications a bit more… Read more »