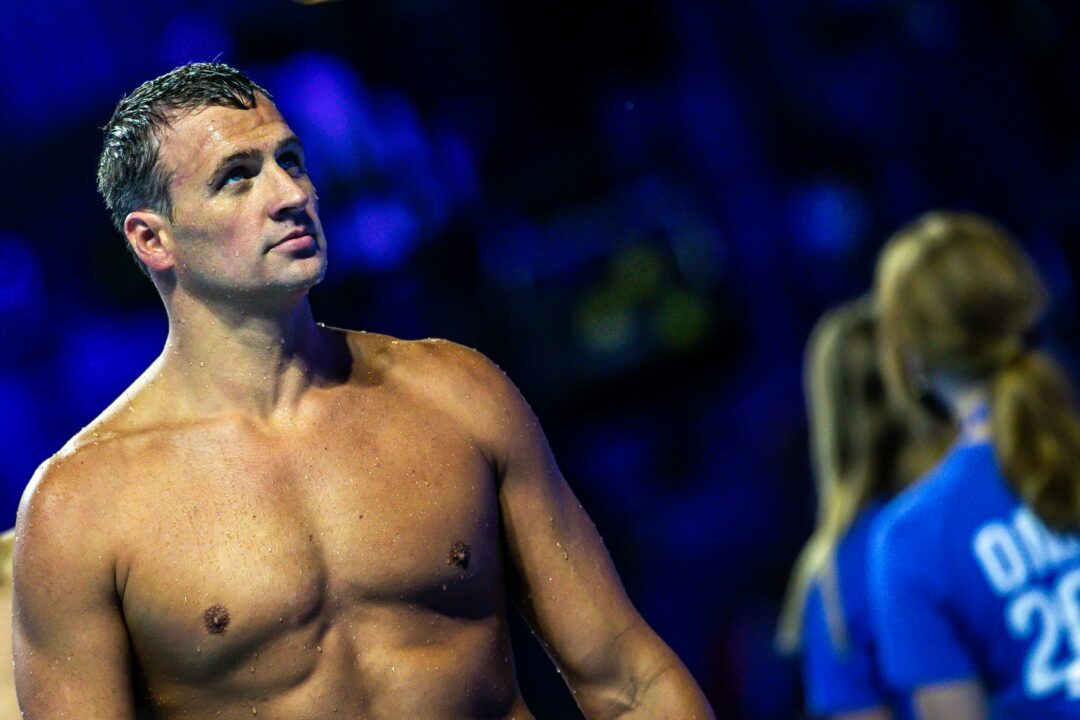 Lochte says he felt depressed after missing the Olympic team last year, and plans to go all-in on the FINA World Cup in 2022. Archive photo via Jack Spitser/Spitser Photography

Ryan Lochte, one of the most recognizable faces in swimming, has spoken up on the depression he faced after missing the 2021 Olympic team last summer.

Lochte, a 12-time Olympic medalist, recently sat down with former NFL quarterback Jay Cutler on the Uncut with Jay Cutler podcast to discuss everything from his career at the University of Florida, to the difficulties he’s faced outside of the pool in recent years and his designs on going all-in on the FINA World Cup in 2022.

Lochte made a push to qualify for his fifth Olympic team last summer, ultimately falling shy after placing seventh in the men’s 200 IM final at the U.S. Trials in Omaha.

The 37-year-old said that, other than his incident in Rio de Janeiro after the 2016 Olympics, missing the Tokyo Olympic team was the toughest situation he’s faced and the first time he really experienced depression.

“That was very tough,” Lochte said. “You know, throughout my whole swimming career and everything I’d been through, I never went through depression. And it was one of the hardest things besides 2016, was just waking up and looking myself in the mirror and being like, ‘damn, I’m a failure.'”

Cutler later asked Lochte about all of the ups and downs he’s incurred over the course of his career, including the 2016 incident in Rio and the suspension he received in 2018.

“More downs than I would like,” Lochte said. “You learn from everything that happens, good or bad. Probably you learn more from the bad things, and I had rude awakenings.”

After the 2016 Olympics, Lochte claimed he and three other members of the U.S. Olympic swim team were robbed at gunpoint which was later found to be untrue.

In 2018, he was suspended by the U.S. Anti-Doping Agency for 14 months for taking an IV in a volume greater than 100mL in a 12-hour period without a Therapeutic Use Exemption (TUE).

“Being where everyone loved me, and I was on top of the world I felt like, and then, in one stupid night, gone. I was like the worst guy in the world, or something at one point,” he added, specifically referring to the Rio incident.

Lochte also said that he’s planning on racing the FINA World Cup circuit in the fall of 2022, meaning he will continue to train through this year.

“I’m still going to swim, I’m still swimming one more year,” he said. “I want to do the World Cup in the fall. So I’ve never done it and I want to do it. So I’m going to be training for that.”

Lochte told Cutler he’ll likely first compete this year in March, presumably at the first Pro Swim Series event of the year in Des Moines, Iowa (March 2-5), and then plans on ramping things up into the fall where he wants to challenge for the overall title on the World Cup circuit.

Asked if he feels he can actually win it, Lochte said: “I can, I’ve just got to get really strong in the weight room. I’ve got to get back to my old self. Which…I’m ready.”

In 2021, the overall winner of the FINA World Cup earned $100,000, with prize money given out after each individual meet as well.

A schedule for the FINA World Cup in 2022 has not yet been announced, though meets typically run from September to November.

Cutler also asked Lochte about the current transgender debate in the sport, with trans woman Lia Thomas holding the fastest time in the NCAA in the women’s 200 and 500 freestyle.

“The (biological) girls, they trained, they have these records,” Lochte said. “Then all of a sudden this happens.

“I mean, I don’t have anything wrong with it. It’s just, when you take her times and put it to the (biological) girls, she has an advantage. And it’s not fair to the other women. So they do have to have rules, like what (Michael) Phelps said.”

Watch the full episode below:

World Cup would be a fantastic showcase for his range and underwaters.

Hope to see him on the big stage again! JEAH! lol

Where is he training now? Under Anthony Nesty?

Just what we need right now is Lochte leading the transgender debate. I am so here for it!! Get that man on CNN ASAP.

At least somebody is leading the debate. Sad that a female isn’t leading the debate for fairness for females. So strange that after all those decades of fighting for female equality, it’s all being taken away by an individual man that decided to become a woman, and a quarter million NCAA female athletes are muted. Not even one brave female can stand up for herself or all females, or are there no more brave females? I’m especially surprised that the retired female greats of the sport that are no longer held hostage by scholarships or woke sponsors can’t speak out. I guess they’re too busy writing books about cooking and self happiness these days? So sad for all your future… Read more »

What a paternalistic and condescending take. “Men need to stand up and tell women what’s good for them.”

Erika Brown has a petition to sign on her Instagram story urging @[email protected]@ncaadive to change the rules and protect Women’s sports. I’d say she is trying to do something.

Nancy Hogsmeade-Makar is certainly leading a movement – or are you too busy glazing at your navel and pontificating on the internet to take notice of the actual movements that exist?

Women can speak up, they aren’t being muted. They just AREN’T speaking up, in the way you want them to.

I gather you didn’t go to Rice. That school usually requires a certain level of intelligence

He answered a question during an interview. Rather than get pooped on for saying “no comment” and being blamed for not supporting her he actually spoke what he thought.

I’m glad he spoke his mind. My comment is really taking a swipe at those who are suppose to be leading our sport keeping their mouths shut right now. Lochte is not equipped to handle the topic with the media It’s like hiring the jr age group coach to be teamusa Olympic coach. Hinchey just stands by and lets Lochte be de facto teamusa spokesperson on the isssue. What an effin coward.

MP spoke up about it, and was pooped on because he too had a “genetic advantage” of not producing as much lactic acid. (which is bogus, because there isn’t proof its genetic and was not his body’s ability due to his training)

I agree USA Swimming/NCAA SHOULD speak.

Ugh. We need Lochte’s inelegant takes on gender politics and “women’s sports” like we need a collective hole in our heads.

Rather what hear what he has to say about swimming and competition than 99.9% of other people

He has a lot more of an authority to speak on the sport than you. This has nothing to do with “gender politics” or whatever your latest buzzword is these days.

He was asked a question. He answered it.

Even Jay Cutler has a podcast!?!?

How many people out there are thinking they need more Jay Cutler in their life?

Nice work if you can get it.

Not many. A sparkling personality was never one of his strong points.

“That he went to the University of Florida solely for swimming and wasn’t planning on what he would do with his life if being a professional athlete didn’t work out.” Does he have an exit plan NOW?

Probably, yes. He doesn’t owe it to us, though. Also, it’s perfectly okay if he still figuring it out.

He has a wife and 2 kids. At that point a lot of things should be figured out.

Not sure if I prefer SwimSwam having edited his response to say “biological” instead of “real”. Because that difference really makes a difference in his intent.

Watching it I really think it’s reaching to say that his intent was to make a patently transphobic comment.

That doesn’t make it alright or anything, obviously we would all prefer if he phrased it differently.

I just don’t believe there’s any malicious intent there.

You’re right, I guess “intent” probably isn’t the word I’m going for. It just made it feel different.

I don’t think he was being transphobic Rather he just doesn’t have the vocabulary to speak formally about it.

I have full confidence that if He was asked “ What do you think about trans athletes competing in the women’s division” in November before became a national news story his the answer would’ve been something along the lines of “ Yeah that’s really cool I love the people enjoy swimming and racing”.

Ryan doesn’t have a hateful bone in his body

One of the nicest olympians I’ve met. (would have been greves but he wouldn’t trade me swim caps lol jk)

but seriously, hes speaking off the cuff and isn’t a public speaker. he will say things like “real” instead of “biological” but that doesn’t not mean his intent is hurtful.

1) bummer that grevers didn’t give you a cap 😞

lol so the story with greves was we were in the warm up pool chatted with him and I said hey, would you mind trading caps with me, since we had the same tyr cap, but his had the American flag on it. and he replied with a very scientific reason, the American flag made the sides sticky so when he did his streamline his head was stuck in place. lol so couldn’t fault him. super nice dude none the less

I agree that his intent wasn’t to be harmful, but it definitely shows he has some internalized transphobia. It’s really hard not to in our culture unless you actively work to avoid it. Trans women are women. Trans men are men. Trans rights are human rights.

Not being able to turn back the clock as far as physical gains after puberty is really a thing.

I agree that SS should not have edited this response…but probably for different reasons!