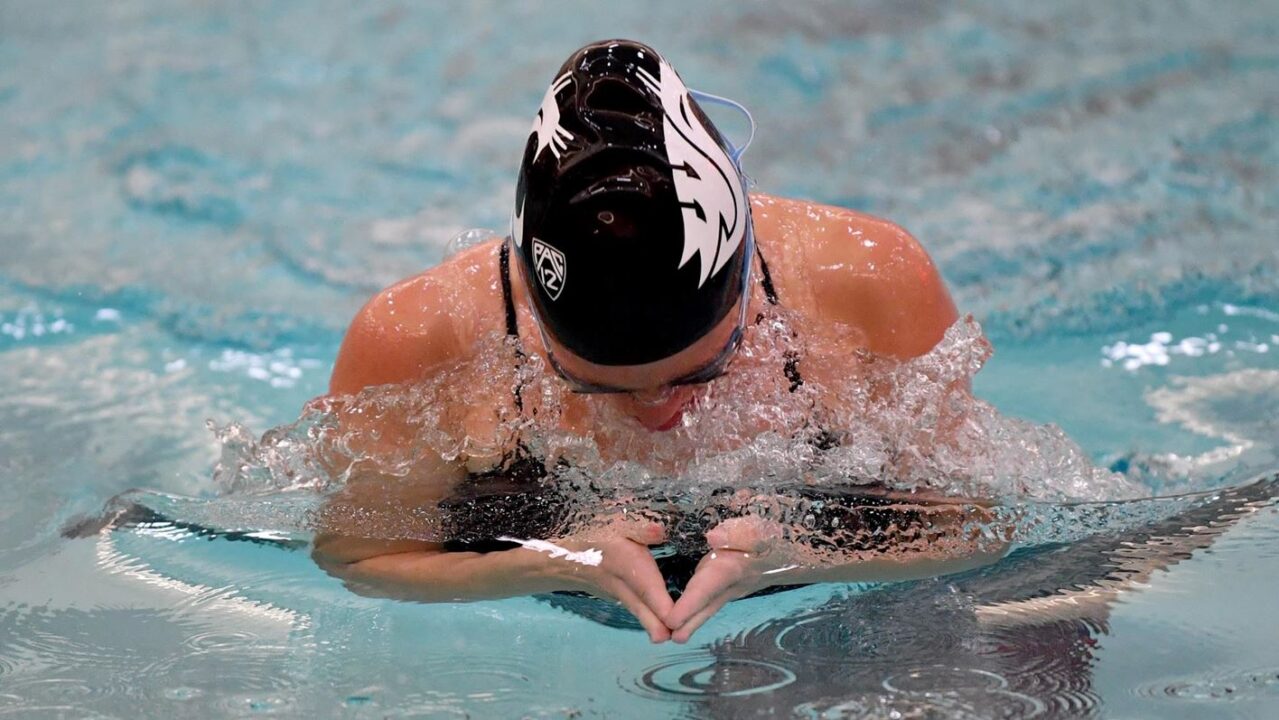 The Cougars will next compete in the 2022 Pac-12 Conference Championships in Federal Way, Wash. set for February 23-26. Archive photo via Dean Hare

COUGARS CLOSE OUT  REGULAR SEASON AT NEVADA
Following a two-week pause due to Covid-19 protocols, Washington State heads to Reno, Nevada to close out the regular season with a dual meet at Nevada scheduled for 5 p.m., Friday. The Cougars will next compete in the 2022 Pac-12 Conference Championships in Federal Way, Wash. set for February 23-26.

HOW TO FOLLOW
Friday’s meet at Nevada will be webstreamed and the link will be available on wsucougars.com

ABOUT THE MATCHUPS
WSU trails in the all-time series with Nevada, 3-15 and the Wolfpack have claimed the last two meetings the last two seasons. The last time the Cougars made  the trip to Nevada, they claimed a 136-126 win in November of 2008.

COUGS IMPRESS IN THE CLASSROOM
WSU earned CSCAA Scholar All-America Team accolades after posting a 3.47 GPA in the Fall, 2021 semester. The Cougars earned the honor the eleventh straight semester including all seven under head coach Matt Leach and for the 21st time in program history. WSU’s 3.47 team GPA featured seven 4.0 and 21 student-athletes with a 3.0 or better during the semester.

LAST TIME OUT
WSU capped a record-setting week with two more school records and five more Top-10 times on the final day of the Phill Hansel Invitational hosted by the University of Houston in late November. The Cougars finished the three-day meet with five school records and 12 WSU Top-10 times. One day after breaking the school record in the 400 IM, senior Taylor McCoy added another one with a top time in the 200 back. Later in the day, the Cougars posted their second relay record of the week with a 3:19.23 in the 400 free relay two days after setting a new top time in the 200 free relay. In Saturday’s 400 free relay win, the team of senior Chloe Larson, freshman Angela Di Palo, senior Emily Barrier and freshman Selena Duran beat the previous record by nearly half a second. Defending Pac-12 Conference 50 Free Champion Chloe Larson added an NCAA “B” time to win the 100 free. The Cougars finished in fourth place out of nine teams with seven of the nine schools earning points in diving. WSU does not have diving.