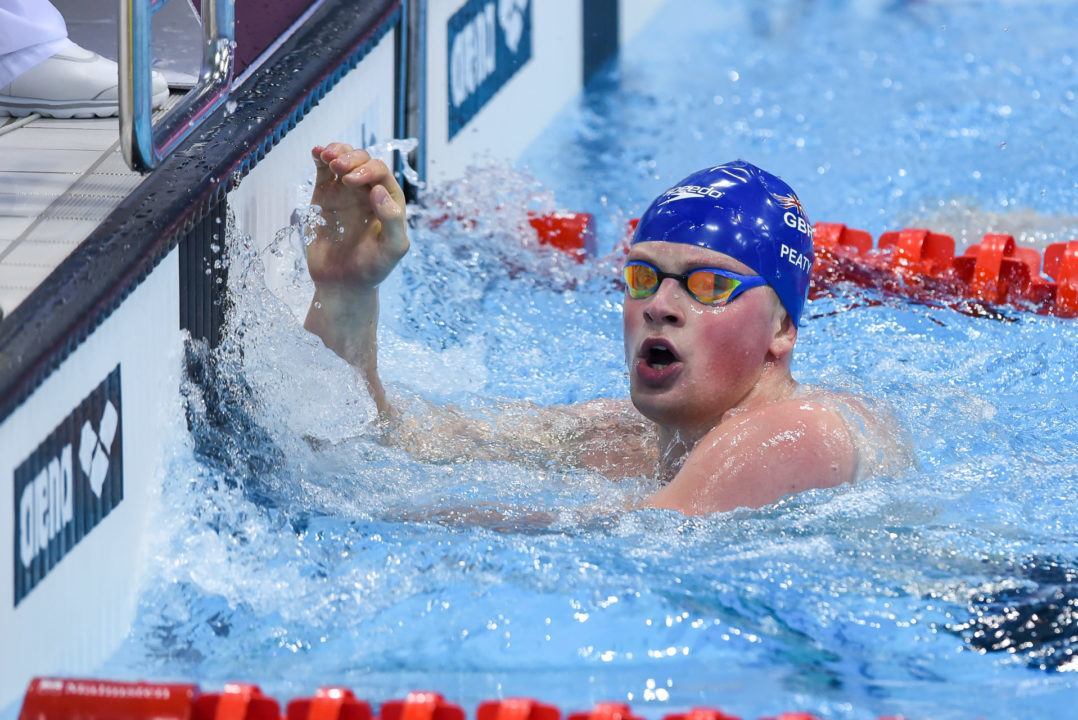 Adam Peaty managed to take a huge chunk off his own world record of 57.92 in the 100m breaststroke with a 57.55 performance. The time makes him a remarkable 0.86-seconds faster than any other swimmer in history in the event. Archive photo via Peter Sukenik/www.petersukenik.com

Chase Kalisz posted the top seed in the men’s 400m IM this morning, taking down reigning world champion Daiya Seto of Japan in the last heat with a 4:08.12. Seto is second overall heading into finals. Japan’s Kosuke Hagino is third with the 4:10.00 he swam to win heat three. American Jay Litherland is fourth overall in 4:11.10.

Canadian Penny Oleksiak managed to lower her junior world record time of 56.99 in the 100m butterfly to a 56.73. That time also beats the Canadian record and sets her up third heading into Semis. World record holder Sarah Sjostrom of Sweden took the top seed with a 56.26. Defending Olympic champ Dana Vollmer was second overall in 56.56.

Conor Dwyer of the USA and Mack Horton of Australia led the way in the heats of the 400 freestyle this morning with times of 3:43.42 and 3:43.84 respectively. Defending Olympic champion Sun Yang was fourth overall in 3:44.23, behind the two leaders and Italy’s Gabriele Detti.

Katinka Hosszu was over three-seconds under world record pace this morning at the 300-meter mark in the 400m IM. She fell off pace during the last 10-meters to ultimately put up a time of 4:28.58, just 15 one-hundredths slower than the record. Heading into finals she’s in a league of her own.

Adam Peaty managed to take a huge chunk off his own world record of 57.92 in the 100m breaststroke with a 57.55 performance. The time makes him a remarkable 0.86-seconds faster than any other swimmer in history in the event.

Without all their top swimmers, the Australians managed to better their Olympic record time from the 2012 Olympic Games where they won gold. The Aussies were a 3:32.29 this morning to lead the hunt for gold ahead of the Americans and Canadians. The Canadians broke the national record with the absence of 100m freestyle Canadian record holder Penny Oleksiak.

Adam peaty with a best time!!!