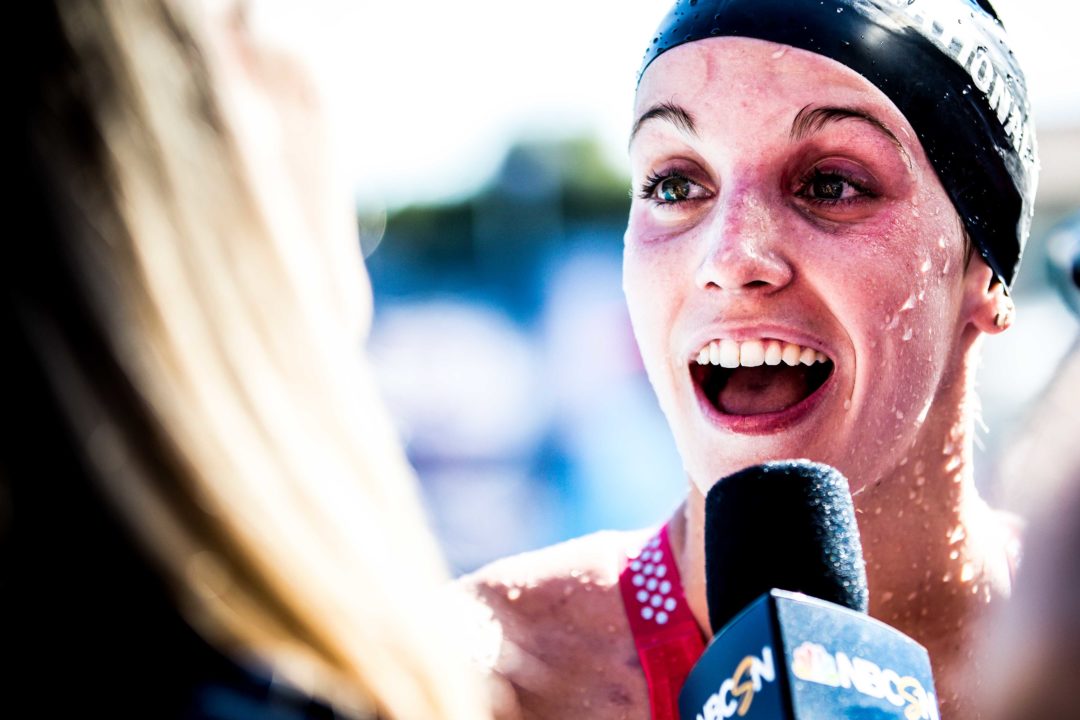 17-year-old Regan Smith was honored with the 2019 Phillips 66 Performance of the Year Award at the 2019 USAS Convention in St. Louis on Saturday. Archive photo via Jack Spitser/Spitser Photography

17-year-old Regan Smith of Riptide was honored with the Phillips 66 Performance of the Year Award on Saturday during the USA Swimming House of Delegates meeting at the 2019 United States Aquatic Sports Convention in St. Louis, Missouri. Smith earned the award for her World Record-breaking performance in 200-meter backstroke at the FINA World Championships in Gwangju, South Korea. Having lowered her own World Junior Record in heats of the women’s 200 back in the morning with 2:06.01, Smith fired off a 2:03.35 in the semi-final to break Missy Franklin’s 2012 world mark by .71. Smith now holds the World Record, World Junior Record, American Record, and 17-18 NAG for Americans in the event.

The Adolph Kiefer Safety Commendation Award went to Dr. Danny Mistry, a USA Swimming National Team Physician and Chair of the Concussion Task Force for USA Swimming. The recipient of the Kenneth J. Pettigrew Award, chosen by the Officials’ Committee, was Melissa Hellervik-Bing who served as the official chair for Florida Swimming, where she supervised the training and certification of more than 350 officials.

She has both the 100 and 200 back world records. That’s a rare feat. I think only a few women have achieved that.

Minor correction, it was in semifinals that Regan broke the world record, and she was just a bit slower in finals.

Good catch, thank you. This has been updated.

Sid Cassidy presented the award, Ron Aiken (sandpipers coach) was the recipient of the open water award (along with the dev coach award)…. he won both. Great Job Ron!

Complete no brainer for the award. Congrats Regan!

Considering the fact that the 100s are more competitive, and the fact that she broke the 100 record by a larger percentage, a good case could be made that she should have gotten the award for the 100.

Maybe they picked the 200 record because it was older, and thus conceptually a more difficult feat. (Also that relay lead-off thing again–ouch!)

Totally well deserved . That was the swim Monument of the Year ( 2 unbeleivable swims ) without a doubt

Well deserved Regan! Congratulations to you & a all the others too.