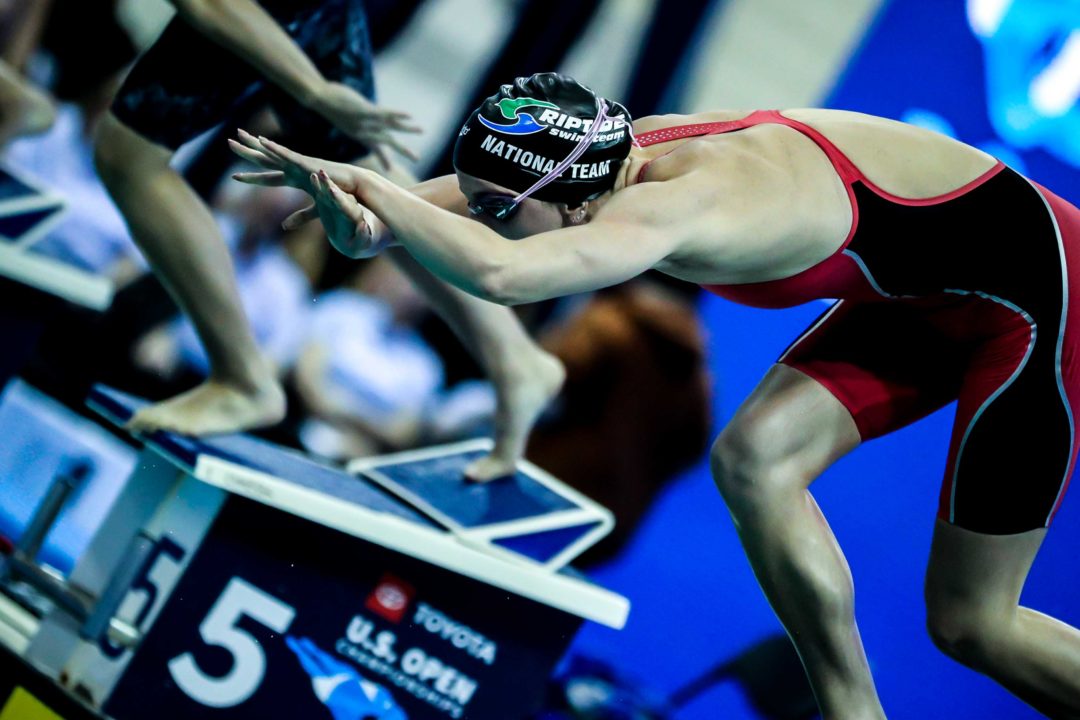 Smith raced to a lifetime best 2:06.39. That erases the former 17-18 NAG Record of 2:06.95 set by Katie McLaughlin at the 2015 World Championships. Archive photo via Jack Spitser/Spitser Photography

Riptide’s 18-year-old Regan Smith set another NAG Record on Thursday night at the Des Moines Pro Swim Series. In the 200 fly final, Smith raced to a lifetime best 2:06.39. That erases the former 17-18 NAG Record of 2:06.95 set by Katie McLaughlin at the 2015 World Championships. Smith’s swim was a lifetime best by nearly a second and her first time under 2:07.

Smith’s previous lifetime best in the 200 fly was 2:07.26, swum at the 2019 Summer National Championships after returning from Worlds.

Smith is best-known as a backstroker, especially after breaking World Records in both the 100 meter and 200 meter backstroke events at last summer’s World Championships; however, there has been a long-simmering suspicion that she might be as good in the butterfly events as well. With this swim, that butterfly potential is really bubbling to the surface. For perspective, Smith swam a 2:06.43 in the 200 back last season in May, about 2 months before the World Championships, before dropping down to 2:03. This meet is about 2-and-a-half months before the U.S. Olympic Trials.

Smith got out to the lead and held it through the final turn, but Worlds medalist Hali Flickinger kicked it into gear on the final 50, out-touching Smith at the finish in 2:06.11. That took down the former Pro Swim Series Record. Flickinger is the 3rd fastest U.S. 200 butterflier in history. With her time tonight, Smith moves up to #7 on that list.

Mind blowing that Misty and especially Mary T. are still on this list..

Imagine Mary T in a tech suit, goggles, and some underwaters. 🥺😳

She’d still have the WR if she did..

As good as she was, goggles, tech suit and better underwater (hers were still pretty good) wouldn’t be worth over 4 seconds as the WR is 2:01 – even if it’s a little suspect.

I geniunely feel like my 200 fly would be at least 4 seconds slower if you took away my tech suit, goggles, and underwaters.

And a starting wedge and deeper pool

I want to see a video of this race

Hopefully they’ll be up on USA Swimming’s YouTube channel tonight. If so, I’m sure we’ll do a post.

It’s posted now. Just watched. Her tempo is super fast — especially the first 50. She was out very fast with a 3/4 body lead at the 50 wall! I don’t know her fly well, but it seems like she may have overdone the opening 50. If she can control her pacing better as she gets more comfortable with this race – oh, and when she’s fully rested – it seems like 2:04 is completely plausible (that’s only a 1.4 drop).

She will swim for American record of course..she has that potential

And to think that 2.06.78 won gold in Gwangju. Tokyo is going to be much faster.

Let’s see how Regan Smith performs in the women’s 100 m butterfly on Friday.

MMFF doesn’t make sense for the USA. Dressel/ Manuel should be automatic choices for the fly and free. Right now I’d say Regan should be leading off with potential for 57 low. Even with a modest 58.5 breast leg from MA/Wilson it should still be slightly faster at 200m than say Murphy and King, who I’d use in prelims and would still potentially earn a medal without competing in the final.

If not a final swim she’d probably get a heat swim.

Not always. The current WR was swam using a MFMF lineup. If Regan goes 57.5 or better again she has a good opportunity to lead off the relay. But obviously it depends what other options are available for the other legs. Some seem to think that swimming lead off is a disadvantage for the women. But I would dispute that. Swimmers like Masse have done solid lead off times on par with their individual and women’s medley swims.