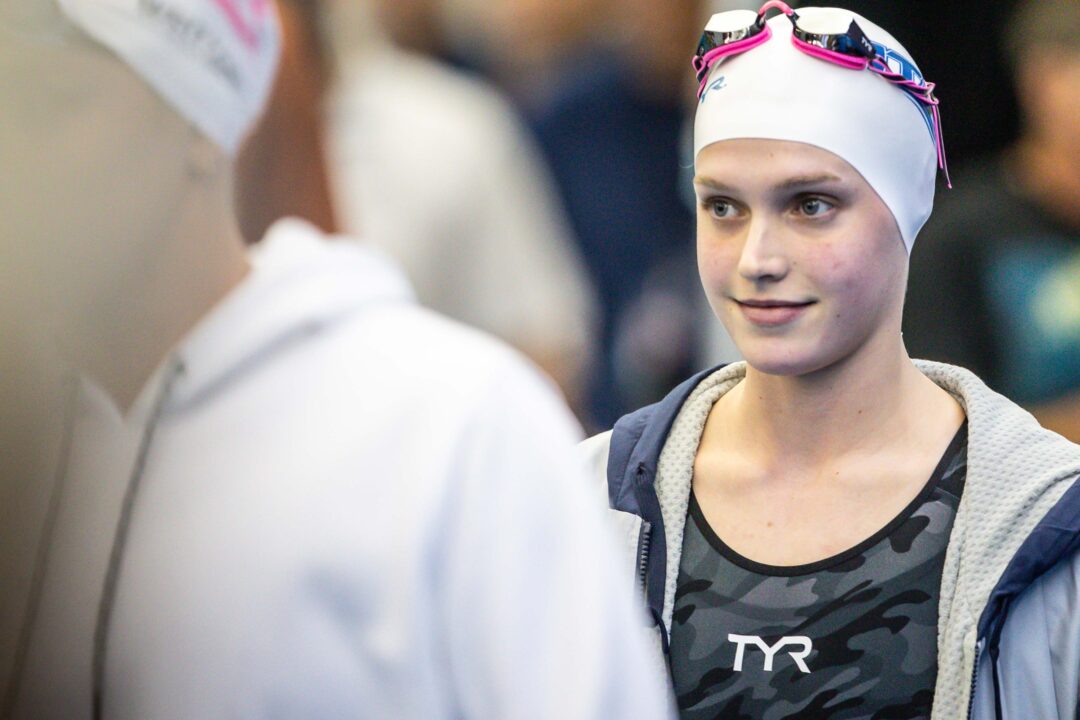 Claire Curzan caused a Medley Relay conundrum for Team USA coaches when she qualified to swim the 100 fly, 100 free, and 100 back at the World Championships. Current photo via Jack Spitser/Spitser Photography

The United States will face a unique quandary when figuring out its medley relays at the 2022 FINA World Championships due to a handful of swimmers qualifying in multiple 100 meter events. Notably, Claire Curzan is qualified to represent Team USA in the 100 freestyle, 100 butterfly, and 100 backstroke, and Torri Huske is qualified to swim the 100 freestyle and 100 butterfly.

In both cases, each pair of swimmers overlaps in at least one event. For Dressel and Andrew it’s the 100 fly. Huske and Curzan, however, overlap in both the 100 fly and 100 free, meaning, swimmers who did not actually make the Worlds team in those events will get the chance to race them in the prelims of the women’s/men’s 4 x 100 medley relay, as well as the 4 x 100 mixed medley relay.

At any World Championships or Olympic Games, the coaches must decide which of the two athletes that competed in each of the 100 of back, breast, fly, and free will swim the medley relay prelims, and which will swim in finals. This is usually an easy decision–whoever places higher in the individual event gets the spot in finals! However, there are exceptions.

The good news for the Americans is that the two men leading the team into this summer’s World Championships have proven to be very good at relays at the collegiate level. The Virginia women won 4 NCAA relay titles and the Florida men won 2 in March, and the Virginia women, especially, had a National-Team-like depth that left some difficult decisions.

Let’s break it down.

Torri Huske is also qualified to swim multiple individual 100s: the 100 freestyle and 100 butterfly. Claire Curzan is qualified to swim three of the four 100s contested at the long course World Championships: the 100 freestyle, 100 butterfly, and 100 backstroke. This is an amazing feat, though it also makes for a little bit of a head-scratcher for Team USA’s coaching staff.

The Curzan-Huske overlap comes in both the 100 free and 100 fly, which means that Team USA will have to find alternatives to swim both the butterfly and freestyle legs of the women’s 4 x 100 medley relay in prelims. Regardless of which teen comes out on top in both the 100 fly and 100 free, both Huske and Curzan will be needed in the finals of the women’s 4 x 100 medley relay, meaning neither should swim prelims.

So who gets the opportunity to swim the prelims relays?

Katharine Berkoff will swim the 50 backstroke in Budapest while Rhyan White will swim the 200 backstroke. Most likely, whoever places higher in their respective event will get the nod for the backstroke spot on the prelims relay. At U.S. Trials, White placed 3rd in the 100 backstroke in 58.59 and Berkoff 4th in 58.61. White’s lifetime best in the event is a 58.43 from 2021, and Berkoff’s a 58.61 from the 2022 U.S. Trials. The most egalitarian option would be to have one woman swim the prelims of the women’s 4 x 100 medley relay and the other swim the prelims of the mixed 4 x 100 medley relay, unless the United States leads off with a male backstroker, but let’s not get ahead of ourselves.

For the butterfly, Kate Douglass is the best option considering that she placed 4th at the 2022 U.S. Trials and 3rd the 2021 U.S. Olympic Trials, and is the American Record holder in the short course yards version of the race. Douglass has an impressive lifetime best time of 56.56 from the 2021 U.S. Olympic Trials despite swimming a 58.14 this week in Greensboro. Even so, she’s the best fit for this leg of the prelims relay, and is already on the team after placing 2nd in the 200 breaststroke.

Neither Huske nor Curzan took on the 100 breast at U.S. Trials, so the breaststroke leg will be decided the traditional way between IU teammates Lilly King and Annie Lazor. King is the World Record holder in the 100 breaststroke, though she swam on the prelims relay last summer in Tokyo after placing 3rd in the 100 breaststroke, placing behind Lydia Jacoby, the Tokyo Olympic gold medalist. Jacoby didn’t make the team this year though, and Lazor is more of a 200 specialist, but it ain’t over till it’s over.

As for the freestyle, Erika Brown placed 3rd at U.S. Trials in Greensboro and Natalie Hinds 4th. Either could get the spot, depending how they swim on the 4 x 100 freestyle relays (there is a mixed relay for this event as well, so each could get 2 or more opportunities to post fast 100 freestyle splits).

As for the prelims relays, regardless of which four swimmers Team USA might go with, they should be a lock for the finals. For reference, it took a 3:57.70 to make the finals at the Tokyo Olympics, and with no Russian delegation, as well as a powered-down Australian crew, the Americans should make this final no matter which morning lineup they go with.

Regardless, neither Dressel nor Andrew will swim the butterfly leg of the men’s 4 x 100 medley relay in the prelims, so it should be given to the 2022 U.S. Trials 3rd-place finisher Trenton Julian, who will be swimming the 200 fly in Budapest anyways.

The backstroke will be very straight-forward: whoever performs better in the individual 100 backstroke in Budapest will get to swim backstroke on the relay in finals.

Whether Fink or Andrew comes out on top in their 100 breaststroke showdown in Duna Arena, Dressel should still swim the butterfly leg of the relay, leaving the freestyle open to Curry. Just like the women’s medley relay, Team USA should have no problem making it through to the finals.

This is another example of a ‘B’ relay that, if put into the finals, would likely earn a spot on the podium, if not the gold medal.

Though the backstroke and the breaststroke legs have yet to be decided, the butterfly and freestyle legs for the finals version of this relay are clear.

The mixed medley relay is a different animal and requires a bit more analysis, but that’s what we live for.

Without a Russian delegation in Budapest, as well as a watered-down Australian team, the United States should have no problem qualifying for the finals in the mixed 4 x 100 medley relay. Even so, in order to get back on the podium and perhaps even claim gold, Team USA has to save its best athletes for the finals–or rather, its most strategically-placed athletes.

Smith held her own on the prelims of the mixed 4 x 100 medley relay in Tokyo, posting an impressive 57.64 lead off leg. Utilizing Smith instead of a male backstroker will allow for a male breaststroke leg, which will be crucial when facing off against Adam Peaty and Arno Kamminga. This is a relay with tons of options, especially when you get two goes at it. For brevity’s sake, let’s start with the four options for finals. As the table shows, the man-woman-woman-man strategy will work best for the United States. Relay ‘D’ utilizes the strategy of the Tokyo Olympics relay that placed 5th.

The aggregate time of the “Finals – A” relay listed in the table is within a second of Great Britain’s winning time and World Record from the Tokyo Olympics.

At the 2020 Tokyo Olympics, the United States used a woman-man-man-woman lineup in prelims and then switched it in finals. Assuming that the United States does the opposite in Budapest, the prelims will utilize a man-woman-woman-man strategy, which would roughly look like the table above.

This lineup utilizes the fastest male backstroker, the fastest female breaststroker and butterflyer, as well as the 2nd-fastest male freestyler–harken back to the Dressel double. Utilizing Armstrong, King, Huske, and Curry in prelims would allow for a reversal in finals resulting in Smith, Fink, Dressel, and Huske, going by current season best times.

Team USA shouldn’t have a problem qualifying for finals, so they can use just about whoever they want. Considering what the best lineup for finals would be, however, we can pretty reasonably deduce who Team USA should use and when they should use them.

If one of the stroke disciplines listed above requires some explanation, it might be the butterfly. Michael Andrew beat Trenton Julian at U.S. Trials in the 100 fly, but Team USA needs Andrew in finals on the breaststroke leg–unless Nic Fink is faster in the 100 breast in Budapest. This opens up the possibility to use a female breaststroker in prelims, meaning Lazor or King.

As Team USA (hopefully) learned from the 2020 Tokyo Olympics, it is essential that they use a male swimmer on the breaststroke. Furthermore, Dressel is so far ahead of the rest of the world in the 100 fly, he would better serve the team there than in the freestyle.

If Smith can go 57-anything and either Huske or Curzan 52-anything, Team USA should get back on the podium in the mixed 4 x 100 medley relay.

Furthermore, utilizing a female, male, male, female lineup mirrors what Great Britain did in Tokyo in their effort to both win the gold medal and set the World Record.

This prelims table is basically just for fun. Team USA will have no problem making the finals of this relay as long as no one false starts. The table above reflects some of USA’s options for prelims swimmers, drawing from other members of the 2022 World Championship team that did not qualify for an individual 100 meter race, save for Annie Lazor who will race the 100 breaststroke in Budapest.

This strategy could be advantageous as it allows Team USA’s fastest 100-meter swimmers to rest in the morning and focus on the relay in finals.

Lots of pondering and mathing to happen for Worlds. Juniors don’t seem to have that problem… seems 28 kids slotted for the 32 guaranteed spots.

Which swimmer is the nicest?

idk if you can see the banner image on this post, but clearly not her. That’s the face of a stone-cold killer.

The real intrigue will surround whether they allow Curzan to swim prelims of the 4 x 200 relay, or if the Phelps stans politic to keep her off so she doesn’t get 9 Gold Metals.

What if commerford swim a 52 on the free relay?

I’d ask you where you got that time machine.

That crap last year was so stupid I block it out most of the time. Like that should be ban-able.

yup. no mckeon and campbell is huge. And aussiebooos i know you have other swimmers but you aren’t finding a butterflied that can touch mckeon and jack/o’callaghan will not be faster than C1.