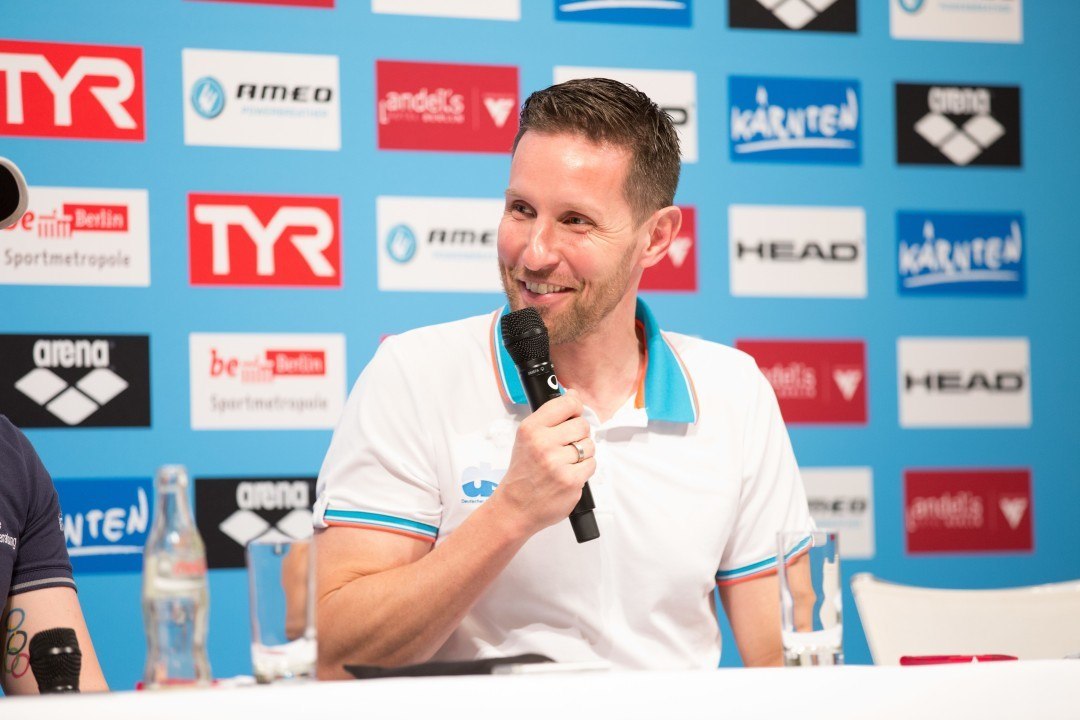 Henning Lambertz, 44, has been the German head coach for 2 years now. Before that, he was the chief coach of one of Germany's best training groups in Essen Current photo via Jo Kleindl

Henning Lambertz, 44, has been the German head coach for 2 years now. Before that, he was the chief coach of one of Germany’s best training groups in Essen – that team included Dorothea Brandt, Hendrik Feldwehr, Christian vom Lehn and Isabelle Härle – all these swimmers are members of the German national team and you will find them on the podium places at the currently-happening German national championships. One of Lambertz’s most successfull swimmers is Thomas Rupprath – a retired World Champion and Olympic medalist.

Q: Mr. Lambertz – do you know the US swimswamnews?

A: Of course, I have the swimswam app on my mobile.

Q: What do you think about the last two days of the national german championships and today’s morning’s heats?

A: Thursday was an awesome day with great races and results like Jacob Heidtmann’s 400 IM swim (note: ranked 2nd in the world now with a time of 4:13,28)  Friday also was a good day but today I’am a little bit surprised that the 100 m male freestyle swimmers had problems with the qualification standard because 49,6 is an attainable time but no swimmer including Paul Biedermann reached it. The following morning races all hit the expectations but the 100 free are a bitter pill – perhaps it was because of the early start time (8 am) – but on the other side, the Olympic start times in Rio will be 1 and 10 pm and the swimmers must get used to it.

Q: Will the moderate perfomances in the male 100 free morning heats have an effect on the 400 m free relay?

A: No, the nomination time of the relay is an addition of the four best single times and I’am sure they are going to swim these times in the finals in the afternoon.

Q: Why does Germany have, compared with other nations, a different nomination procedure for Kazan? (Note: German swimmers must reach German qualification times at GER nationals in heats  and finals and must confirm their achievement in a competition until early July again.)

A: I noticed in former times that the times German swimmers reached at the season highlights, very often were much slower than at the trials before. Statistics said that 8 of 10 swimmers performed worse at the big international meets. So our nomination procedure is an attempt to keep the performances on a good level.

Q: German swimmer Laura Simon is one of many US athletic students – and she already has made  the first qualification standard for Kazan on the 50 breast. How can she make the second qualifying step?

A: Laura can choose an US long course meet, she should communicate this to us and then is entitled to swim there to confirm the requested time. Only the period of time is fixed – from May until early July.

Q: The German Swimming Federation (DSV) has published “The German Youth Concept 2020” – what are your expectations on the concept in the daily work of swim clubs, coaches and associations?

A:  Many things must be well co-ordinated – the “German Youth Concept” and the “Perspective Team Concept” I have developed. For coaches, the “German Youth Concept” should be a modular system – they can select between different themes the needed advices and procedures – what fit to their swimmers trainings status. The intention behind this detailed concept is to give a guideline for the coaches daily work. But of course, the concept in its entirety and structure should be understood.

Q: Which swimmer of the “Perspective Team” do you see in the Kazan roster?

A:  The concept of the “Perspective Team” is designed for the long-term – and this is not Kazan or Rio, it is Tokyo 2020. For example, I just have appointed two 14 years old into the “Perspective Team” – and they are still not on the level to make the Kazan team. But I see good chances for some older ones, perhaps Marlene Hüther, Sonnele Öztürk or Alexander Kunert to make the Kazan team.

Q: What do you think is the major difference between German swimming and the world’s leading swim nations?

A: Top swimmers in the USA but also in some European Nations have very professional environments and they get more financial support or scholarships – that give them the opportunity to concentrate on swimming without financial pressure. For example, Hungary’s Olympic medalists  receive a pension in the amount of 1.500 EUR from the age of 35 years. Or other nations pay immense sums for an Olympic medal – in Germany, it is only 15.000 EUR for an Olympic gold medal. Germany’s best A sqad athletes (that means they must be among world’s 8 best athletes in their discipline) only get 300 EUR from the “Deutsche Sporthilfe” (German Sport Aid). The German swim sport needs some financial incentive systems and of course equilization payments for the delayed start of pension payments. It isn’t fair that athletes who are for a long time in a national A or B squad have a lot of financial disadvantages in comparison with normal German employees.

Anyone who trains on a high level must get professional support – in every aspect.

Q: Do you think, the new German “Anti-Doping-Law” is the right way and could be a role-model worldwide?

Doping must be fought by all available means and the new german law should serve as a role model for all nations. It is not fair that other countries have less anti-doping tests than Germany or USA – all athletes should have the same opportunities at a competition. I really hope that a lot of other nations are going to take the German law as an example and will follow.

Q: What is your personal first summary after being appointed German National Head Coach in 2013?

A: A lot of things are on the way but the German Swimming Federation (DSV) is a huge association and changes take their time. For me, a clear commitment to a professional sports of swimming would be very important to give the athletes all the needed professional support.

Q: You were a very successful swim coach during your career – do you miss the daily work with athletes?

A: Fortunately, I have the chance to travel with the “Perspective team” to several trainings camps over the year – and there I coach the youngsters. I’am and will be a head COACH not a head administrator.

Q: What goals do you set for the World Championships in Kazan?

A: For the pool swimmers, we have planned 4-5 medals, open water swimming 2-3 medals  But we know that we have less top swimmers at the moment – if one of them is ill, our planning won’t work. At the moment, it is more important that the swimmers can keep the perfomance level over the season and can reach semifinals to get the chance to compete in a final – and this is the goal until Rio and we also will keep the good spirit in the team we have had at European Championships – I’am sure this will be reflected in good performances. And then  2016 to 2020 will be the next period of time for futher changes.

Congrat’s Gold Medal Mel and Braden! The German National Team Coach has the app for your website on his smartphone! 😉