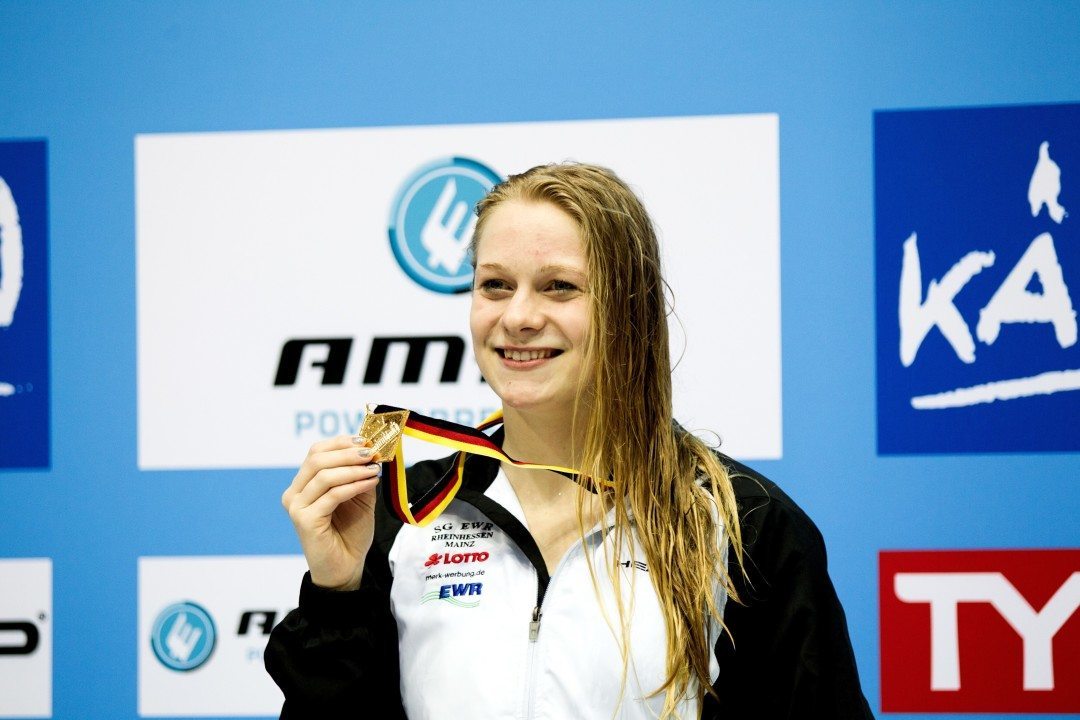 The second day of the German National Championships started with two wins by German sprinters who actually train in the... Current photo via ©Tino Henschel

Henning Lambertz, 44, has been the German head coach for 2 years now. Before that, he was the chief coach of one of Germany’s best training groups in Essen

The second day of the German National Championships started with two wins by German sprinters who actually train in the United States. Johanna Roas, a student athlete at the University of Denver, took the 50 back win in 28.30 and said afterwards: “I really didn’t expect this – but obviously the hard training over the last 2 years in the USA pays off.” Roas’ time falls inside the German qualification standard and can make the German Kazan team in this event – but must confirm this achievement at another meet until early July.

Next up in the 50 breaststroke sprint race, University of Virginia sophomore Laura Simon touched out Dorothea Brandt with a 31.43 swim to 31.60. This women’s final was a battle of the generations – Brandt 31 years old, Simon ten years younger. With this swim, Simon, who is an four time All-American, is the only German 50 breaststroke swimmer inside the qualification standard from today’s race. “I am so happy and very pleased about this win.” Simon said in a short statement.

On the men’s side in these events, the winners were Carl Louis Schwarz in the 50 back in 25.27 and Hendrik Feldwehr, Germany’s fastest breaststroke sprinter at the moment, took the 50m distance win in 27.35. Marco Koch will swim in the 100 and 200 breaststroke events, but said in a press conference earlier this week that he will focus on the 200 race at World Championships.

From the German point of view, the development in the middle and long distances is very pleasing: Sarah Köhler clocked a 4:07.00 in the women’s 400 free, which places her now as 11th-fastest in the world. And Florian Vogel swam a courageous race in 3:46.53, earning a respectable 6th place in the world ranking.

In the absence of Germany’s top butterfly swimmer Steffen Deibler, who pulled out of the meet because of an infection, no men made the qualification standard in the 50m butterfly race. The same held true for the women’s final as well. The winners were Jonas Bergmann in 23.99 and Alexandra Wenk in 26.55, respectively.

Paul Biedermann is set to swim the 100 free and Marco Koch the 100 m breaststroke. And also Laura Simon will swim the 100 breaststroke, where she will race against Vanessa Grimberg and Caroline Ruhnau.

Really nice to see some young blood in german swimming. But the only medal contender remains Koch. That’s poor for a nation like Germany.