Poppe and Scott: A Race, a Lifetime, in Six Photos 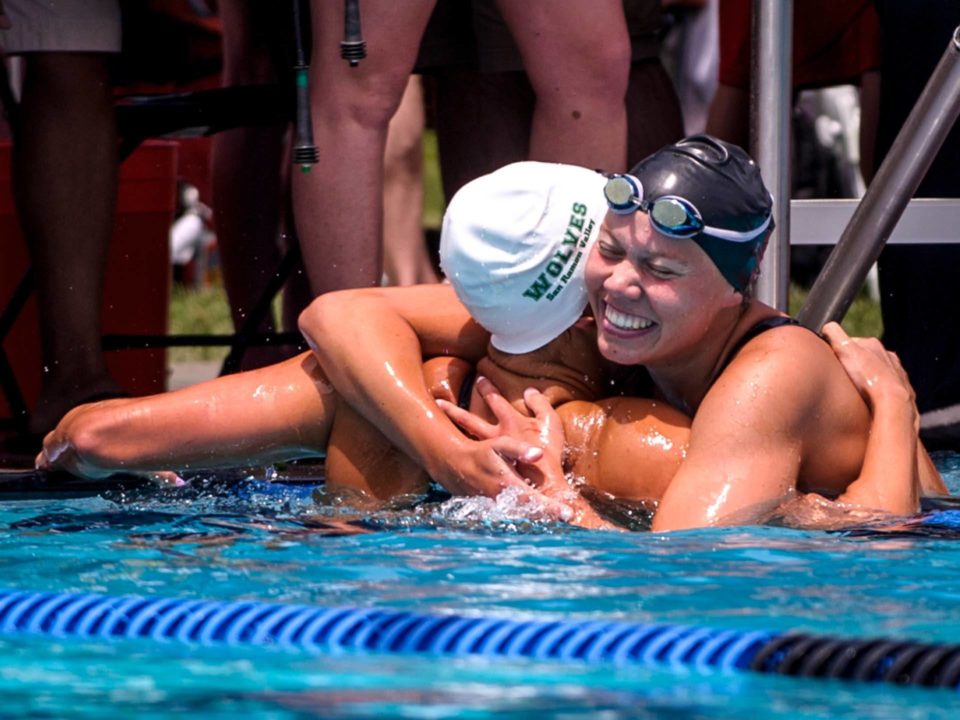 In just six photos, Robert Ashby managed not only to capture the essence of a race, but also the emotion and grace of two great champions. What follows are those six shots, with a little added commentary. Current photo via Robert Ashby

After missing the pandemic-delayed championship meet in January, the East Grand Rapids High School girls returned to the top at the MHSAA Division 3 meet.

McKenzie Siroky, who will play NCAA hockey beginning in the fall of 2023, broke Miranda Tucker’s MHSAA 100 breast record in 1:00.48.

I first met Robert Ashby sitting in the stands at California’s North Coast Section (NCS) Championship last year.  I was writing my first series of reports for SwimSwam, and it began to occur to me that my cell phone camera wasn’t up to the task.  Bob had a nice camera, a long lens, and the look of a man who knew what he was doing.  So I asked him if he would be willing to share some of his work with SwimSwam.  Why not?  We’re both swim parents, it’s what we do, right?  What Bob produced were some of the iconic photos of 3 boys all breaking the national record in the same race.

This year, I had a better camera, but still no real talent.  So before the meet, I asked Bob if he would be willing to do it again.  He asked me what I wanted him to focus on.  So I started listing off all the races I was excited about, first there’s the 200 freestyles…and then the IM’s…  About midway through my laundry list of every single race, I stopped mid-sentence.  I realized I was telling him how close the women’s 50 free was going to be.  He knew how close that race was going to be.  His daughter, Mary, is a superb sprinter, and she was going to be competing for that title.  I couldn’t ask a man to be a photo journalist during his daughter’s race, nor could I ask him to shoot the whole meet.  So I narrowed it down.  “Bob, if you could focus on the women’s 100 breast finals, Heidi Poppe and Riley Scott in particular, and maybe the Granada men’s 400 free relay, we’ll be really good.  Anything else you capture and are willing to share would be much appreciated.”

After the meet, just as I was finishing up the finals recap, Bob’s photos started to arrive.  The first was a batch of six from the women’s 100 breast.  I was tired from an emotional couple of days, and from a recap that was taking way too long to write.  So I hastily picked one of Bob’s pictures, replacing ones of my own, hit send, and went to bed…

It wasn’t until the next day when I really took a look that I realized just what Bob had sent.  Genuine art.  Photographic haiku.  In just six photos, Bob managed not only to capture the essence of a race, but also the emotion and grace of two great champions.  What follows are those six shots, with a little added commentary.

(All photos courtesy of Robert Ashby.)

The Start:  To me, this photo exudes the power of two great champions launching into a great battle.

Most people already knew about the talent of Heidi Poppe (left).  The Stanford recruit has been a fixture on the national scene for some time.  While other’s probably already knew, the revelation of Riley Scott (right) hit me while sitting in the Florida bleachers at NCSA Jr.s back in March.  Somewhere during the last 50 of her 200 breast victory, I began to get really excited about a race 3000 miles away and two months in the future:  Riley Scott and Heidi Poppe were on a collision course in the NCS Championship.  Two great champions head-to-head.  I knew right then it was going to be the marquee race of the meet.

Ferocity: I love the Jekyll and Hyde contrast captured in this photo.

To know Heidi Poppe, is to know a kid with a sweet, playful, puppy-like nature.  On just about any given weekend, if there are big plans being made, almost without fail you’ll find Poppe near the center, getting everybody organized.  All swimmers welcome.  It’s not unusual to have a flash-mob of a dozen or more Aquabears show up for pizza and movie night (they are like locusts). But it’s never really about the movie, it’s about being swimmers, shared quest, and enjoying each other’s company.  Heidi is happy, much loved, and a consummate teammate.  But underneath all of that gregariousness, lies a fierce competitor. It comes out in the big races, and Bob captured all of Heidi’s ferociousness that first stroke.

Destiny: From the start this race had the feel of destiny.

Before the meet, I was speaking to the coach of another high school.  She was saying that the 1:00 barrier is really hard to break.  “Some kids just get to a minute point, and they stay there for awhile before they can break through.  It happens in every stroke, but breaststroke is the toughest for everybody.”  In speaking with Heidi’s parents before the race, there was some debate, so we finally decided that Heidi has gone a one-double-oh somewhere between seven and ten times.

To put this photo further into context, every girl in this race swam under the Automatic All American Qualifying time just to get into this final (AAA – 1:03.77, 8th Qualifying time: 1:03.52).  It’s about as elite a high school race as one can see, and Poppe and Scott have put some distance on everyone.

Emotion: The first thing you see in this photo is the powerful release of emotion.

All of the practice laps, strength training, and near misses come pouring out in Poppe’s reaction to seeing her time.  But after looking at the picture for a bit, the eye takes a step back, and then one notices a  hand resting gently on her shoulder.  It belongs to Riley Scott.  And stepping back further still, one see’s Scott’s beatific smile, for which I can only think of one word: Grace.

I’ve not had the pleasure of meeting Riley Scott, but a generous spirit shines through in this picture. She swam her best, and one senses she can accept the result…for the moment.  I will be rooting for her to go under next.  One also gets the feeling that some college will be getting a great teammate soon.

Accomplishment: The scoreboard says it all.

In this case, achievement starts with a :5.

Many thanks to Bob Ashby for his photographers eye and his artists soul, capturing this amazing race.   And of course many more thanks to Heidi Poppe and Riley Scott, for their striving, courage, and grace.

Very nice photos and nice description. Love the 4th picture and the wrap up!

What could Miss Poppe expect more?
Breaking the minute barrier for the first time in her final high school meet!
Cool.

Great article! Great photos. In the second picture, look at the clarity of Poppe’s left hand…I can see her thumbnail. You can see the power in her pull in that photo. Just awesome.