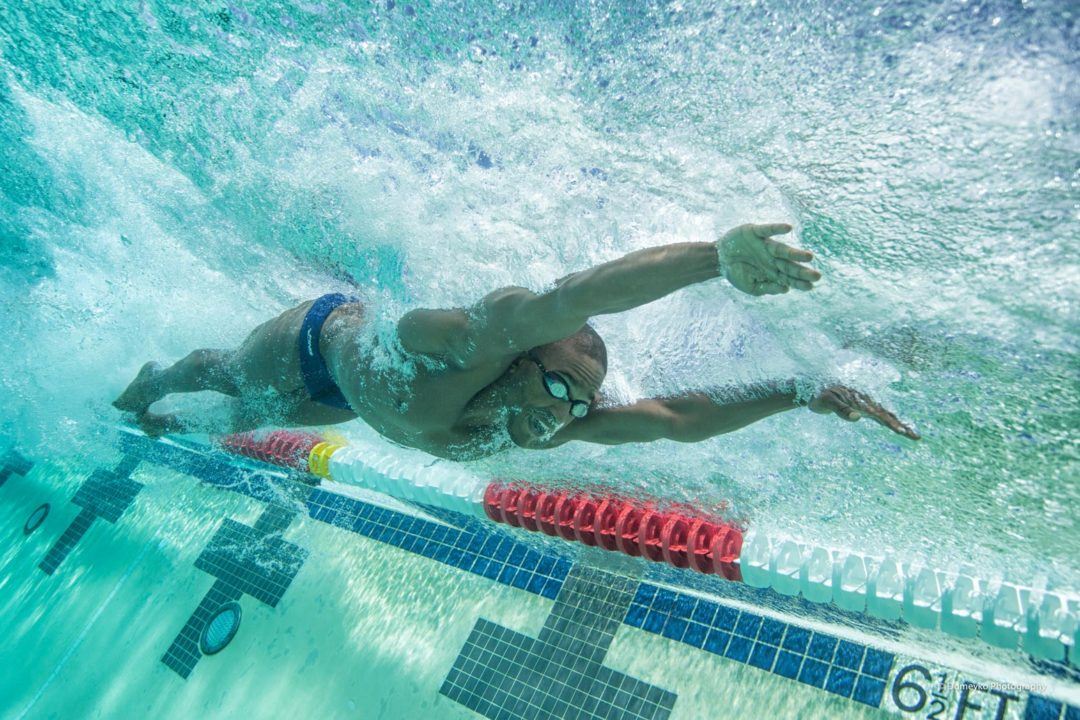 Most sports take place in air, where drag forces apply but are not nearly as detrimental to performance as they are in swimming. Current photo via Giles Smith

An optimal dryland workout that follows these 3 training goals is going to create a better athlete, and better athletes always produce faster swimmers.

The Fluid Dynamics Foundation Behind The Aqua Knuckles Idea

John O’ Grady: “When you swim with your fingers slightly spread, you improve the force you can produce with your pull and you swim faster.”

Today’s workout will be focused on the lower body.

Most sports take place in air, where drag forces apply but are not nearly as detrimental to performance as they are in swimming. With the density of water being 784 times greater than air, any errors we make in our body position or stroke mechanics are compounded at almost any speed, but even more so at higher speeds. However, we don’t have to be going very fast at all in water for these drag forces to ruin our day. The faster we swim, the bigger price we pay for our mistakes. Frontal drag is enemy #1 of the swimmer. There is no mercy in the water.

There are four factors that determine how much frontal drag will slow a swimmer down. The first is position. Is the swimmer underwater or on the surface? The second is the cross-sectional surface area of the swimmer moving forward. How large is the swimmer? What is the body angle? Are the legs and arms protruding out too far? Is the head too high? The third is the surface characteristic of the swimmer, including the suit, cap and goggles. How slippery is the swimmer? The fourth, and most important, is the swimmer’s speed. How fast is he or she moving in the water?

There are three different types of frontal drag forces that can slow a swimmer down, and they are all important. The first and most profound is pressure or form drag which occurs as a result of two important facts we see in good swimmers. First, swimmers are non-streamlined objects, even in the best position they can achieve. Second, good swimmers are in water and travel at speeds approximating 2 meters/second or higher. The physical shape of a swimmer (surface area moving forward), the medium of water, and the speed of the swimmer in the water are factors that determine what is called the Reynold’s number. This determines the flow characteristics around the moving swimmer. At the Reynold’s number of a good swimmer wearing a tech suit, the flow of water around him/her will change from laminar (smooth, at the head and shoulders) to transitional (separated from the boundary a foot or so behind the head and shoulders) to turbulent (somewhere near the waist). As the fluid transitions from the boundary of the swimmer’s body to a turbulent state, it then forms a vortex or slipstream behind the swimmer. The difference between the higher pressure at the head of the swimmer and the lower pressure behind the swimmer in the slipstream is what determines the pressure drag.

The second drag force is caused by friction. Friction occurs as a result of molecules rubbing against each other as an object moves through a medium; in this case, water. In general, the rougher the object (swimmer), the more friction. The smoother or slicker the object (swimmer), the less friction. Thus, the friction of a swimmer is largely determined by the surface characteristics of the swimmer; the cap, the skin, the goggles and the suit.

Third type of drag force is called surface or wave drag. It occurs as a result of the swimmer being partly in the water (submerged) and partly out of the water. Virtually all of the wave drag of a swimmer occurs from the front end of the swimmer’s body (head and shoulders).

This week in Lanes 2, 3  and 4, you will receive the Race Club webisode featuring our favorite way to streamline in order reduce frontal drag. We hope you enjoy.

So are you saying because I have a real big head, my frontal drag will make me slower than Jimmie? He has one of those teeny pea-heads.

Too bad your not a cone head.

Lol – Great comeback!!! Keep up the amazing work Gary you are the best.