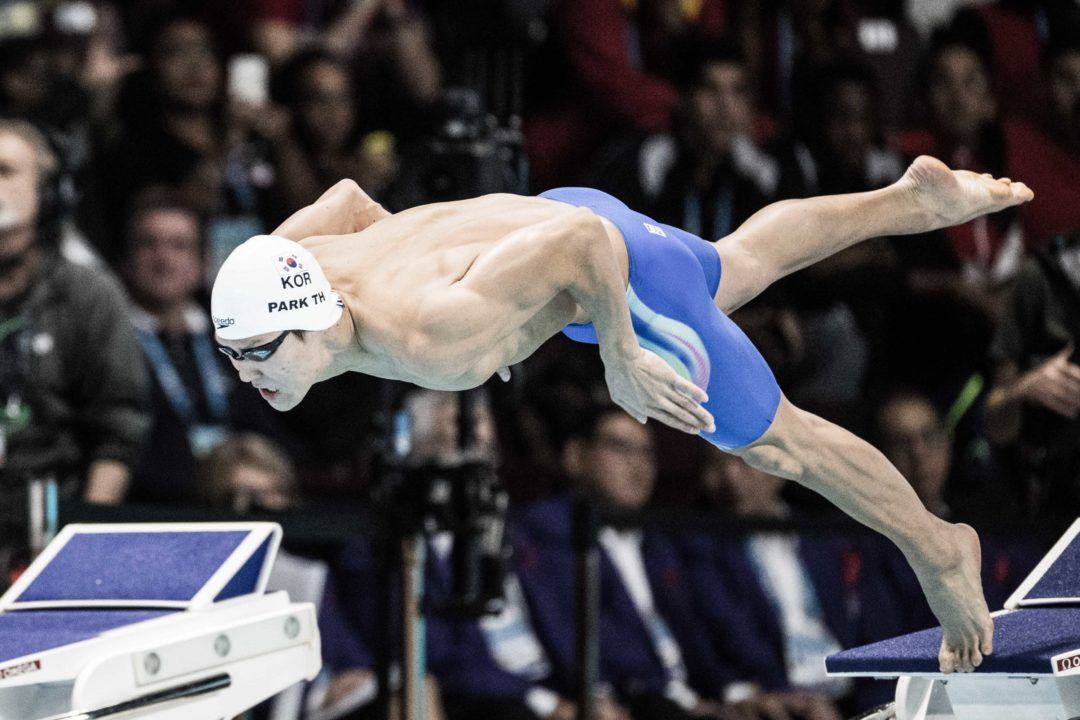 With the Korean Swimming Federation, now under the direction of the Korean Sport and Olympic Committee due to corruption allegations, reportedly in administrative ‘shambles’ since March 2016, its nations swimmers have the opportunity to use overseas meets as qualification competitions for the 2017 World Championships. We reported last month how Park Tae Hwan planned on using the Arena Pro Swim Series in Atlanta for that purpose, and the 27-year-old has wasted no time making his presence known.

Park has been consistently training under the radar at Warringah in Australia with Tim Lane as coach. He was set to compete at NSW Championships, but bowed out at the last-minute, making the Short Course World Championships in Windsor Park’s last major competition. In Windsor, Park put a cap on his memorable back half of 2016 by upsetting 2016 Italian Olympic Champion Gregorio Paltrinieri in the 1500m freestyle race, clocking a new personal best time of 14:15.51. With his performance, Park lowered the Asian, Korean and Championship records all in one swim.

During this morning’s prelims in Atlanta, Park took on a tough double of the men’s 100m freestyle and 400m freestyle events, earning the top seed in each. His 100m freestyle was particularly impressive, as the 2008 Olympic champion touched in a super swift 48.62 to top a stacked international field. That time not only checks-in as the only sub-49 outing of the morning, but it also now ranks as the 2nd fastest performance of Park’s career. Only the 48.42 he notched in 2014, a mark which stands as the Korean National Record, has been quicker.

His 48.62 prelims swim also dips well beneath the FINA A cut of 48.93 for Worlds qualification, meaning Park has most likely earned his first Budapest bid with the performance.

Time will tell if Park proceeds with the double yet again tonight, also sitting as the top seed from the 400m freestyle prelims where he notched an effort of 3:51.62. With his 100m free qualification in tact, Park will most likely go all-in for the 400m tonight, trying to earn a mark below the FINA A cut of 3:48.15, a threshold under which he should easily dip.

While in Atlanta, Park is slated to also swim the 200m and 1500m freestyle events.

Wow that’s a magnificent 100m race! Can’t wait to see what he can show us in a few hours time!

48.26,in the heat!Parktaehwan gave us a surprise!