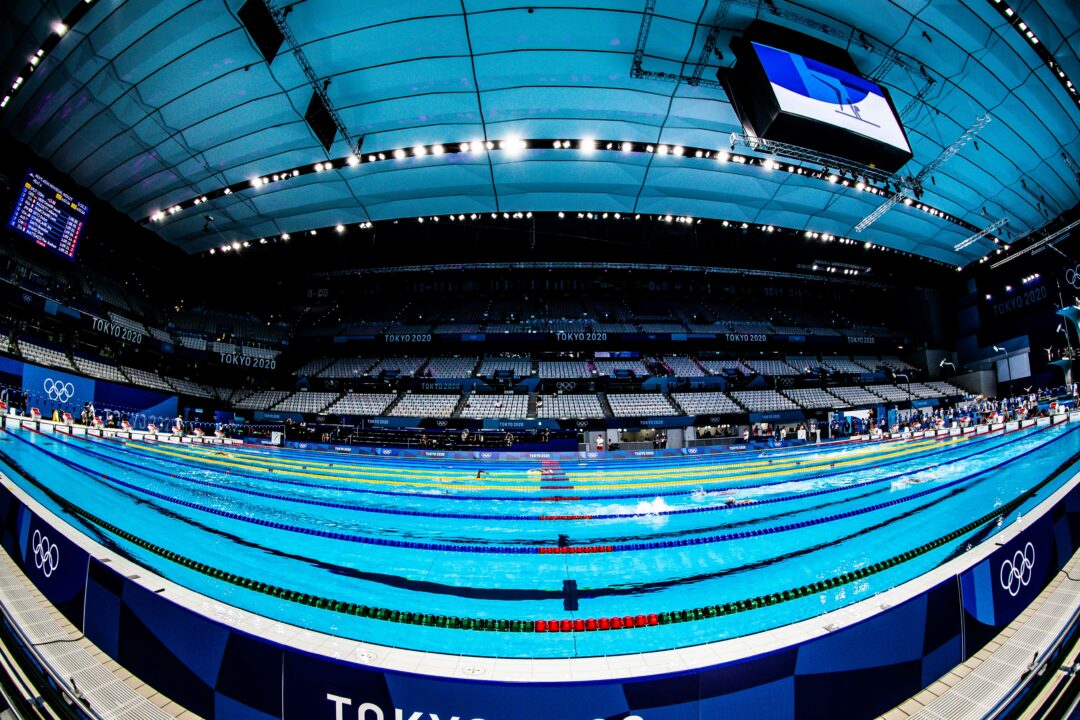 Scooters have claimed another major injury to a swimmer, as Meg Harris reveals she broke her arm when she hit a rock on the way to the beach. Stock photo via Jack Spitser/Spitser Photography

Three days after posting a picture of herself in a hospital room with her arm in a sling, Australian swimmer Meg Harris has shared more details about the nature of her injury.

“I was riding to the beach with my roommates on a scooter and my front wheel hit a rock. I went over the handlebars and unfortunately broke my arm,” Harris said in a statement. “I am currently working on a plan with my coach that is going to work best for me going forward into 2022.”

Harris is far from the first person, or elite swimmer, to have injured themselves while riding a scooter. Recently, Bobby Finke missed the 2019 World University Games as the result of a scooter injury before coming back to win gold in the 800 and 1500 free at the Tokyo Olympics. Jack Hoagland, the defending ACC Swimmer of the Championships, also injured his wrist in a scooter accident late last year.

A number of studies have come out showing the risks of using scooters, especially electric scooters. One published in February 2021 in the American Journal of Emergency Medicine based on data from an Austin, Texas hospital found that electric scooters produced an injury rate of 180 injuries/million vehicle miles traveled. That’s as compared to about 1 injury/million vehicle miles traveled in motor vehicles.

In her Olympic debut in Tokyo, Harris swam the second leg on the Australian women’s 4×100m free relay. She split 53.09 as part of a gold medal and World Record-setting performance for the relay.

Leading up to Tokyo, Harris had been training at St. Peters Western under Coach Dean Boxall but, she has since moved to Marion and is now under Kyle Chalmers’ coach Peter Bishop.

So whoever it was that said Titmus will peak for Comm Games rather than Worlds this year was right.

Not a call that I agree with but its her career, her choices …… and her reputation on the line.

The 200free at CG could, potentially, be tough with the presence of a CAN quartet (Oleksiak, McIntosh, Ruck) and maybe Anderson (if she can get healthy) …. and whichever compatriots make the cut. Otherwise, she’s only got McIntosh as potential competition at 400 and likewise at 800 with maybe another team mate somewhere in the wide-view shot.

Worlds ARE the real measuring stick …… but maybe it boils down to wanting a year with decreased pressure; an argument to which I can give some credence.

I agree but a different perspective might be that Comm Games might be more lucrative for her spsonsorhip wise because quite frankly the World Champs are basically invisible in Australia outside of the swimming community.

Comm Games does not pay a cent in prize money. As ES said on the TV show swimmers only receive $30,000 & need to enter paying meets , so should Aust swimmers use up the few top level swims in their pocket for nothing? .

Then there is the matter of fewer giving a sh*t about some ‘ Commonwealth’.. The only interest is if QE will conk out mid event.

When it comes to the public funding $$$$, Worlds will be the “ranking meet” for the year from what Rohan Taylor intimated post Tokyo. Swimming AUS isn’t so flush with funds (and Fairy Godmother Gina so munificent) that they can really afford to send a significantly weakened team resulting in a major fall-away in results/rankings ……. and the corresponding reduction in $$$$$.

Whilst CP put it crudely, there is no prize money at CG and the days of parlaying a CG gold into a really significant corporate sponsorship deal are long past.

Cannot agree more. Don’t forget Hong Kong is also part of Commonwealth & Haughey will be there for 200 free.

Hong Kong haven’t participated since they were handed back to China.

AHHHHH, thanks, didn’t know that.

Hong Kong hasn’t been handed back to China yet. That’ll happen in 2047. They’ve only left the British Union so far.

Note: Sorry I’m from Hong Kong so I just felt the need to correct you.

Ultimately I think Commonwealths as an event is a lot more appealing for athletes, even if it lacks the prestige of worlds. It commands a lot more public engagement (in Britain & Australia at least), and carries a fair bit more media buy-in than swimming worlds. I imagine it’s a fantastic experience, essentially an Olympic Games without the intensity and pressure, but still a lot of kudos (again, in Britain & Oz at least).

Canada used to give the games a lot of air time as well, not sure ab out nowadays, and India would have to be the new money market of the Commonwealth

It wouldn’t surprise for the 4×100 to be much closer this year with the Campbells having extended breaks, McKeon not getting back into training until February and Harris injured.

Australia still remain heavy favourites in the 4×100 free due to the amount of depth they have. They still have such a large list of swimmers to pick from with the likes of: