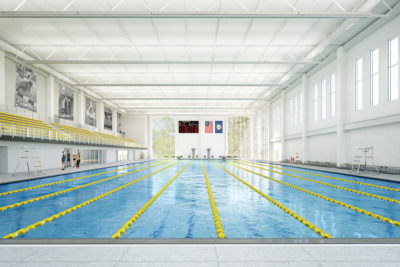 Included in the $50 million initiative is a new 10-lane, 50-meter pool with seating for 700 spectators. Current photo via Centre College Athletics

29-time Paralympic medalist Jessica Long has been named to the US Para Swimming National Team for 2022, clearing the “A Standard” for top funding.

Centre College, located in Danville, KY, has announced a new initiative for a $50 million expansion of their athletic facilities. The plans include a brand-new 10 lane, 50 meter pool with a movable bulkhead, plus 1 and 3 meter diving boards. The natatorium will also have seating for 700 people. You can see a rendering of the pool below:

Speaking on the project, Centre College President Milton Moreland said “This new facility will allow us to continue attracting talented students from around the nation and across the globe not only to work with our world-class faculty but also to participate in a premier athletic and wellness program with dedicated coaches and staff who teach important leadership skills such as teamwork, resilience and determination.”

$50 million in new construction is a massive bill for an NCAA Division III school, but fundraising is already well underway. According to Centre College’s press release on the project, $38 million has already been raised, thanks in large part to 2 lead gifts.

Here is a list of the new facilities and expansion included in the initiative:

Centre College currently sponsors NCAA DIII men’s and women’s swimming & diving programs, and president Morehead says he believes the new aquatic facility will help expand the rosters of those teams. For the 2021-22 season, Centre has 25 women and 16 men on their swimming & diving rosters. Last season, the men’s and women’s teams both finished 3rd out of 7 teams at the Southern Athletic Association conference championships.

Notably, Virginia Military Institute (VMI) recently announced a new aquatic facility as well. At 10 lanes, the Centre College natatorium will be larger, and it’s set to have the capacity to seat more spectators.

This pool will be bigger than the University of Kentucky’s and University of Louisville’s facilities. Crazy exciting for central Kentucky!

The seating may be more at Centre (which is sorely needed for KY state HS and USA meets), but the UK pool is a bit longer than 50m even with bulkheads. Both UK and UofL have diving platforms. From the description, it looks like the Centre pool will have 10 lanes long course, two more than UK and UofL, but if the pool is 25y wide, those lanes will be narrower. Depending on the configuration of the 25y lanes (lengthwise or width-wise), there will be more short course lanes as well, but those could be narrower than the D-1 schools. The optimum configuration for them would be 10 scy lanes ACROSS the pool, each 8′ wide, which is the configuration… Read more »

Seem to be arguing on technicalities KY Swim Nerdier. I think the point is that Centre is a NCAA Division III college and they are building a state of the art facility that rivals UK and Uof L. Any college that can build a rival facility is definitely exciting for the state of Kentucky at large. Your need to argue seems to prove that Centre’s pool is comparable in all areas. Surely, though, we can all agree that this is a huge boon for Kentucky Swimming. Plus, we also cannot forget the Stivers Center at Union College. They have a fantastic facility in Barbourville, Kentucky.

The Kentucky is pool exactly 50m with both bulkheads in. Id like to see the athletic department at UK try to catch up with the rest of the SEC and give them a real pool. U of L is slightly bigger but as much as I hate Louisville they could definitely use a new pool too.