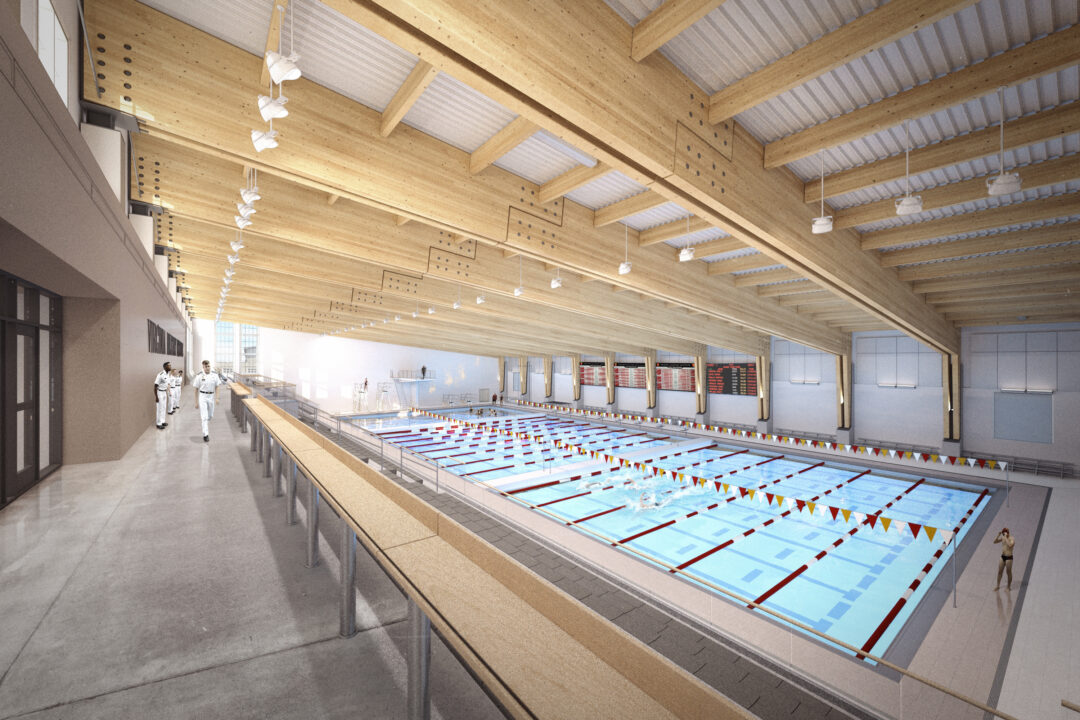 VMI has begun construction on its new $44 million aquatics center that will include an 8-lane, 50-meter competition pool. Current photo via Lenny Brown, VMI Athletics

Construction of a new $44 million aquatic center at the Virginia Military Institute (VMI) is underway, with completion of the facility expected in late 2022.

Work on the new facility began in December 2020 with plans to replace Clark King Hall, constructed in 1969, as the school’s primary aquatics facility.

The new facility will mark a major expansion from the 6 lane 25-yard pool that currently houses college swimming & diving, college water polo, ROTC activities, and physical education classes. The new facility, currently dubbed The Corps Physical Training Facility Phase III, will have an 8-lane 50-meter pool that can also be set up in a 25 yard course.

The new facility will allow the school to expand into physical therapy, swimming qualifications for military schools like US Army Rangers and Navy Special Operations, faculty and staff wellness programs, and SCUBA training.

Funding for the 58,000 square foot facility will include public and private money. About three-quarters of the $44.2 million facility was included in the state’s biennial budget proposed by Gov. Ralph Northam, a 1981 graduate of the school. That funding was approved by the General Assembly.

That amount was supplemented by private donations.

VMI is a public senior military college located in Lexington, Virginia in the central part of the state. The school has an enrollment of about 1,700 cadets. All students are required to participate in Reserve Officers’ Training Corps (ROTC) of the United States Armed Forces programs, but unlike the federal service academies, graduates are not required to serve in the military upon graduation.

The VMI women placed 7th out of 7 teams at the 2021 America East Swimming & Diving Championships, while the men finished 4th out of 5 teams.

Maybe with more lanes, they won’t be forced to resort to waterboarding for their aquatic recreation. https://www.washingtonpost.com/dc-md-va/2021/12/30/vmi-waterboarding-hazing-rat-line/

Wow, quite the upgrade! They went all in!

Its good to have the gov as an alum!

looks tremendous. Will be a great pool for all types of meets in VA

Absolutely first class, and covers not only NCAA and club sports, but military aquatic training as well.