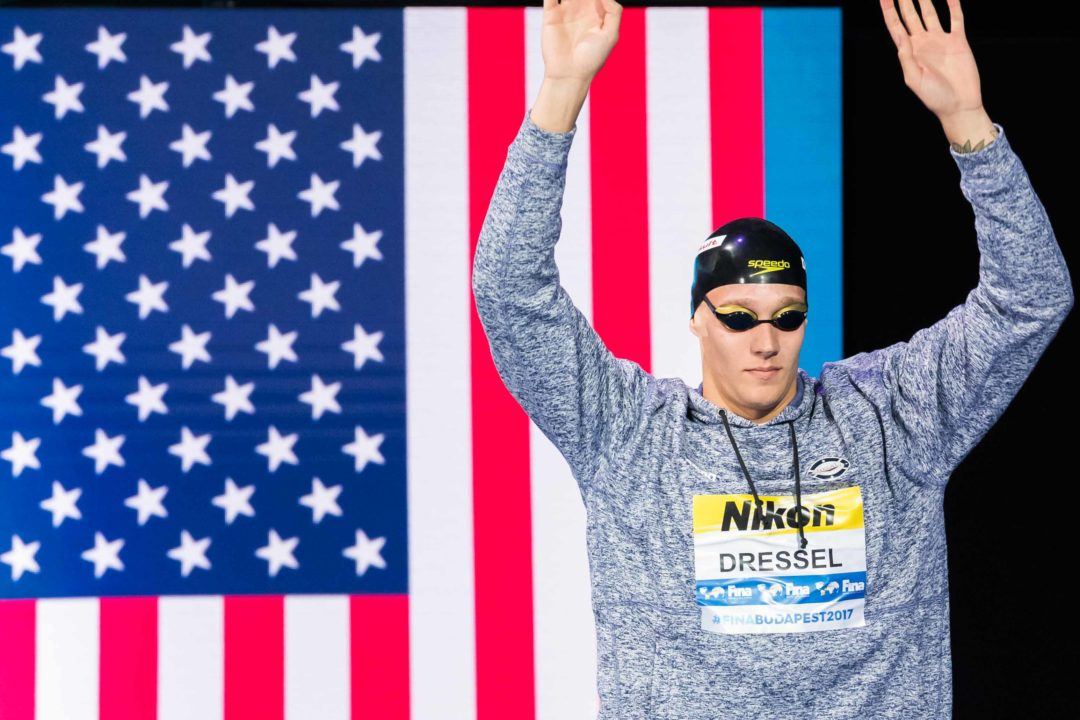 If Caeleb Dressel reaches the top of the podium in Tokyo he's looking at a $37,500 gold medal bonus. But how does that compare with other nations' incentives? Archive photo via Mike Lewis/Ola Vista Photography

We recently reported how Hong Kong individual gold medalists at this year’s Olympic Games in Tokyo will be given a payout of HK $5 million (~$644,000 USD), an increase of over 66% from the amount offered at the 2016 Games in Rio.

This led us to take a look as to other nations’ medal bonuses paid by Olympic Committees to be given to those Summer Olympic Games athletes who work their way onto the podium in Tokyo, keeping in mind that these OC-paid medal payments aren’t the only way Olympic athletes are funded.

The United Kingdom, for example, does not offer specific medal bonuses but rather devotes approximately $162 million USD of government and lottery funds to Olympic and Paralympic sports each year. (Money Under 30)

Olympic sports such as badminton, basketball and surfing, which do not receive elite funding by UK Sport, are able to apply for up to £500,000 of financial help from a new “aspiration fund” set up by the government. (The Guardian)

Another example is monetary benefits bestowed upon members of the United States’ national swimming team, including tiered monthly stipends depending on pro, NCAA or high school status.

Bottom line, medal payments are just one reward for the physical, mental and financial sacrifices made by athletes around the world whose dream is to hear their anthem played in front of the biggest sporting audience.

Olympic Medal Rewards per Nation as of 2019

Some data courtesy of Money Under 30.

Wow, what a gargantuan disparity between Australia’s payout and Singapore’s.

The disparity in medals is commensurate. Singapore Golds: 1. Australia Golds by Ian Thorpe: 5.

True, but if you look at the medals Australia won at Rio it doesn’t amount to a lot of money for a country of Australia’s wealth. The prize money is pretty poor really.

Had to look this up haha

Ye manipulating people through state run propaganda and being one of the most corrupt leader is totally right!!!

I don’t think buying votes and cheating in all his elections counts as democratic, but you don’t bother with the facts anyway. And throwing around terms like EU in this context is even more embarrassing.

This is intersting… Def when you then start to compare the actual meal counts per country.

Which could mean that after an Olympics, the money dished out for the rewards are higher than the ones offering more per medal, because they spread the wealth among more individuals.

Would be interesting to see the total money rewarded after an Olympics compared, as well.

kind of…. some countries spend on raising the athletes, some spend money on paying for their medals.
Hungary does both. Olympic medalists get life time pension in Hungary from age 35 based on the number of medals. Not only the athlete but their coaches too get the same amount, not necessarily who coached them but whom they name.

Well, Hungary is top 10 all-time on the Olympic medal board, top 8 counting only Gold medals and Nr. 2 on the world on the Olympic Gold per capita list. So there’s that.

Hungary is not #2 in the world in Olympic gold per capita.

So, Hungary is ranked 5th in that category. Maybe you saw the stat before Pyeongchang? The vast majority of Hungary’s medals have come at the Summer Olympics, whereas the countries ahead of them… Read more »