No Katie Ledecky for Trident at US Derby; Rule and Rasmus Join Roster 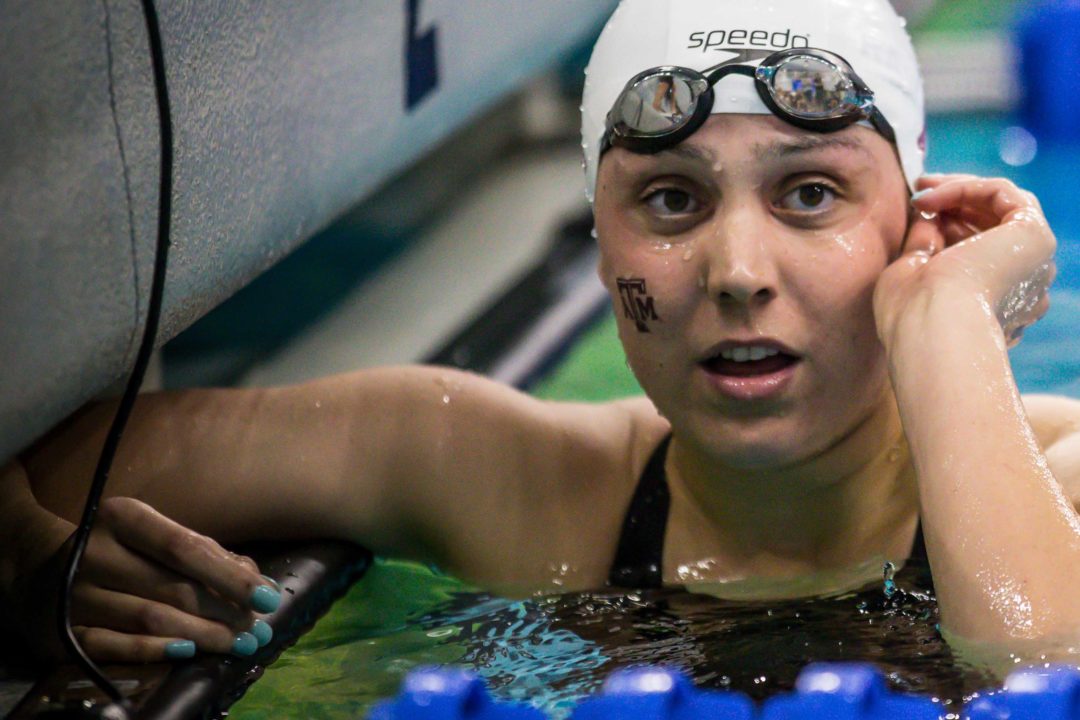 Claire Rasmus, who in March completed an 11-time All America career at Texas A&M, will join the Trident for the final meet of the season in Maryland. Archive photo via Jack Spitser/Spitser Photography

The DC Trident will be without Katie Ledecky at this weekend’s U.S. Derby meet at the University of Maryland, but have added Remedy Rule and Claire Rasmus to their roster for what will likely be the team’s final meet of the 2019 International Swimming League season.

Ledecky grew up in Bethesda, about 10 miles from the University of Maryland, but currently lives and trains on the west coast at Stanford University. She swam in the team’s opening meet in Indianapolis, but with the Trident unlikely to qualify for the Las Vegas final, that meet will likely be her only appearance in the inaugural season of the league. The team says she had a pre-planned training block to prepare her for next summer’s Olympic Games.

The team’s new additions both attended college in the state of Texas. Rule, who went to the University of Texas, is a native of Crozet, Virginia, which is only about a 3 hour drive from the University of Maryland. She’s a versatile swimmer who is better in short course than long course and can range from the 50 through 200 freestyles, and also race the 50, 100, and 200 meter butterflies. She’s good enough in the backstroke and IM races, plus the 400 free, to work in a pinch there as well.

The Trident will also be without Annika Bruhn, who will miss the meet because of the German National Championships, and Australian Brianna Throssell.

The Trident currently rank 3rd in the American standings for the season behind the Cali Condors and LA Current, but ahead of the New York Breakers. It would take a near-miracle scenario for them to advance to December’s final in Las Vegas.

OK. Not too happy Ledecky only went to one ISL meet. I thought she was all in for ISL??

Yea, so much for building the brand. I was going to buy some gear. If she’s not in, neither am I.

This is extremely disappointing. How is she going to show up for the PSS last week and then not come to a meet 20 minutes from her home town? I’m super disappointed at her just blowing off two of the three meets

PSS stands for Professional Swimming Series. There is no shame for professional swimmer to participate at professional meets and to get good money there. Plus I don’t exclude that it was also a requirement from her sponsors.

I really hope in the future ISL considers doing a roster freeze at the start of the season.

Didn’t you forget that ISL calls itself a professional league. Not explicitly but supposedly. So there should be no moral obligations like you are swimming for national team for instance. The relationships within the league are regulated by contracts only. That is kind of compromise between league’s and athlete’s professional interests. Don’t bring there something that is not supposed to be there by definition of this business. And that is a business first of all on both sides.
Katie Ledecky is predominantly LCM swimmer and performing at high level in prestigious meets is the core of her professional interest. The recent endorsement by VISA is a good example of that. The ISL isn’t in this picture. If ISL interferes… Read more »

I wasn’t commenting about Ledecky but the swimmers being added to teams late in the season.

Yozhik lost himself there …..too funny

Rasmus, Bratton, Galat, Gibson – quite a few Texas A&M postgrads on Trident. Should be a fun meet to attend looking forward to it

The flip side of the argument of why Ledecky would only do 1 meet (other than training/travel) might be that she’s a swimmer who is already making money from endorsements and PSS and whatnot. she could see it as that she’s giving other swimmers an opportunity to make money they wouldn’t be making elsewhere.

I actually did this for the Beijing Olympics. Could’ve easily won 400 IM, but I figured I’d give Phelps the opportunity

Idk what all the fuss is about, I’d much rather see her kick some tail at the Olympics. Its an obvious move for her. It shouldnt be that disappointing to ‘fans’ beause KL is doing KL and shes going to deliver when it counts- and when I think when it matters most to a lot of us and to swimmers.

Then don’t swim in the league. Nothing wrong with being selfish for your Olympic needs, but don’t act like you are all in and then bail on a meet in your hometown

Although I’m disappointed, she’s just following the money, which is one of the big points about ISL right? More opportunities for athletes instead of just the FINA meets?

Most of us know that DC Trident, NY Breakers, AquaCenturions, and to a lesser extent Team Iron have no chance to advance to Vegas at this point and many will opt for (better) Olympic performance than stick around for ISL prize money. Hopefully this will change in a non-Olympic year but for now all ISL can do is learn what works and next year immediately following the Olympics it will have a great show to attract more people into watching the sport.

Huge disappointment. I thought it was a good bet she would be at their home meet……and I bought tickets 😩

Don’t be selfish. By buying tickets you made a significant contribution to the success of this movement. You should be proud of yourself as I’m proud of you. You know that to be canonized as saint the person has to sacrifice something valuable and go through suffering. Good luck with that 😀

4
-37
Reply
He Gets It Done Again
Reply to  Yozhik

11
-1
Reply
Yozhik
Reply to  He Gets It Done Again

Don’t you see the guy is in distress and is suffering the painful loss. Give him at least some hope that it will be appreciated from above 😀