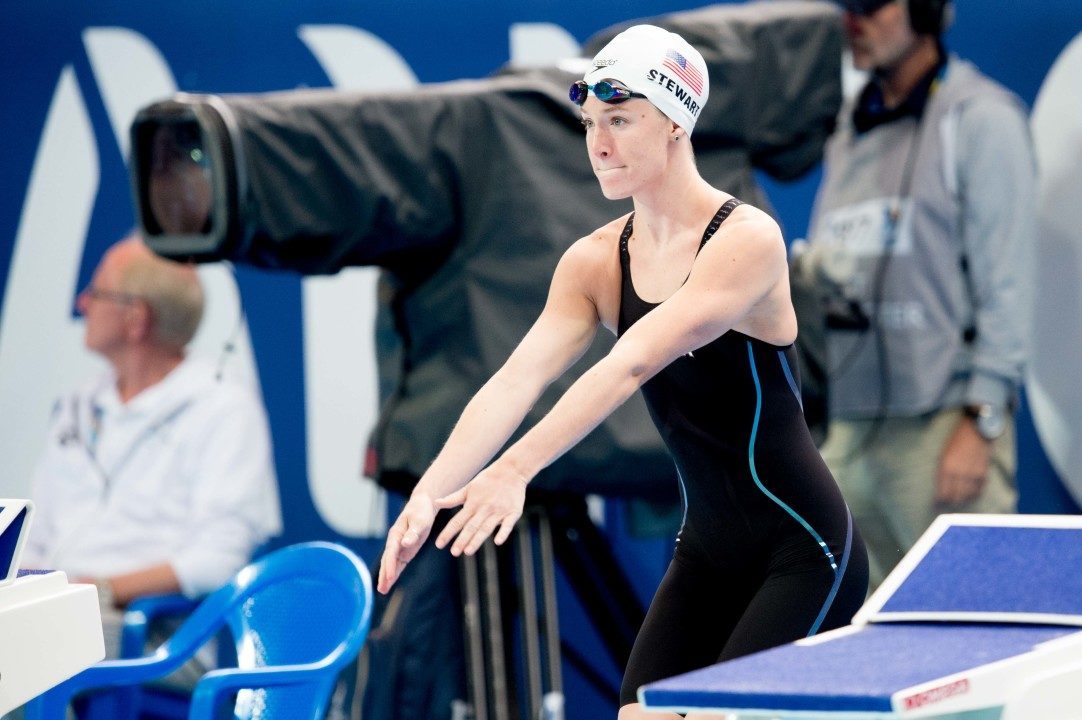 The No. 4 USC women's swimming and diving team (8-2, 6-1), led by a corps group of upperclassmen and arguably the top freshman class in the country, begins the postseason at the 2016 Pac-12 Championships, Feb. 24-27, at the Weyerhauser King County Aquatic Center in Federal Way, Wash. Additionally, the Pac-12 will host the men’s diving championships concurrently with the women’s competition. Archive photo via Mike Lewis/Ola Vista Photography

The No. 4 USC women’s swimming and diving team (8-2, 6-1), led by a corps group of upperclassmen and arguably the top freshman class in the country, begins the postseason at the 2016 Pac-12 Championships, Feb. 24-27, at the Weyerhauser King County Aquatic Center in Federal Way, Wash. Additionally, the Pac-12 will host the men’s diving championships concurrently with the women’s competition.

The highly competitive Pac-12s features No. 1 Stanford, No. 4 USC, No. 6 California (the two-time defending conference champion), No. 14 Arizona, No. 19 UCLA as well as Arizona State, Oregon State, Washington State and Utah.

* Links to live results will be posted to Pac-12.com.

USC’S PAC-12 SWIMMING AND DIVING CHAMPIONSHIP NOTES
USC, which was third at the 2015 Pac-12s, has won at least two Pac-12 individual titles (including diving) in eight straight years and in 14 of the past 15 seasons and has won at least one title in 21 of the past 22 seasons … Troy has never won a Pac-12 team crown, but did win four times during the WCAA era, its last coming in 1985 … USC finished second (for the sixth time) in 2013 by a mere 21 points behind first-place Stanford in the closest finish in conference history. The Trojans’ total of 1418.5 was their most ever at the conference meet … USC won three individual titles in 2015 for the second year in row. Kendyl Stewart, as a junior, won her second title in the 100y fly last year (she has two of USC’s three in the event). Graduated seniors Andrea Kropp (200y breaststroke) and Haley Ishimatsu (platform) were also winners. Stewart is seeded third in her specialty. Junior Chelsea Chenault enters as the top seed in the 500y free with freshmen Allie Wooden and Elizabeth Stinson third and fourth. (USC last won the 500y free in 2013, the third year in a row Haley Anderson captured it and the eighth time for a Trojan). Stinson and Wooden enter the 1650y free as the top two seeds in an event Anderson won from 2010-13 and that the Trojans have won nine times. Freshman Kirsten Vose and Chenault are seeded 1-2 in the 200y free (USC last won it in 2010 with Katinka Hosszu) and Vose is also the top seed in the 200y breast (USC has won it six times), second in the 100y breast (USC has won it five times) and 200y IM (USC has won it four times) and eighth in the 100y free (though no swimmer can swim more than three individual races). Chenault is also fourth in the 200y fly (USC has won it seven times) while freshman Maidson Wright is seventh. Junior Anika Apostalon is second in the 100y free (trying to become the first Trojan ever to win it), fifth in the 50y free (she would be just the second Trojan to win it) and 10th in the 100y back.  Freshman Riley Scott is seeded third in the 100y breast, fifth in the 100y breast and sixth in the 200y IM. Sophomore Hannah Weiss is fifth in both back events while freshman Hanni Leach is seeded top 10 in both. Junior Kelsey Kafka is seeded in the top 10 of both breast events. Senior Kasia Wilk is seventh in the 100y free, freshman Destiny Nelson is fifth in the 400y IM (USC has won it six times), senior Lucy Worrall is eighth in the 100y fly and junior Riley Hayward is ninth in the 100y breast. Troy has four conference relay titles, claiming the 800y free relay in 2003 and 2010 and taking the 400y medley relay in 2006 and 2009.

USC’s 29 Pac-12 women’s diving titles (12 on 1-meter, 12 on 3-meter, five on platform) are second most in conference history (behind Stanford’s 31) and most have come under the direction of 17th-year diving head coach Hongping Li. A host of seniors will vie for Pac-12 titles and points this week. Senior Sam Adams has six career Pac-12 finals to her credit while seniors Natalie Kalibat, Katherine Van Winkle and Jacqui Suitt will be looking for their first, though all are still valuable Pac-12 scorers. Two freshmen will make their debut in Madison Witt and Tabby Krebs. Adams enters the meet with USC’s top 1-meter score while Witt leads the squad on 3-meter and platform. Leading the men’s contingent are seniors Collin Pollard, a career nine-time finalist, and Deon Reid and sophomore Dashiell Enos. Both Reid and Enos joined Pollard in the 3-meter final last year.

This season in dual meet competition, USC won its season-opener at Utah, downed Hawaii and lost to North Carolina State in a two-day home meet, followed with a home win over Oregon State. The Trojans then swept Arizona and Arizona State on the road before resuming competition with a win over Wisconsin on Jan. 12. USC completed its home schedule with an upset over No. 3 Cal, 153-147, and then fell to No. 2 Stanford, 152-148. The Trojans closed out the dual meet season with their ninth-straight win over UCLA, 181-119.

The Trojans feature one of the top freshman classes in the country and boast nine swimmers and two divers who have posted NCAA consideration results as well as one junior transfer. The total complements the 12 veteran swimmers and divers who have also turned in NCAA cuts.

TOP TIMES – Trojan swimmers and divers with NCAA `B’ cuts

* Senior Collin Pollard reached the final on platform to cap off the USC men’s and women’s efforts at the 2015 USA Diving Winter Nationals. He finished 12th in the platform final with 992.60 points, 669.80 carried over from the semifinals. Freshman Madison Witt and senior Sam Adams reached the semifinals on women’s platform, finishing 17th (434.40) and 19th (382.35), respectively.

TROJANS IN THE COMMUNITY

The Trojans’ swimming and diving teams have developed a strong presence in the community, involved in a variety of ways.

* The entire team has adopted the South L.A.-based Bethune Middle School and has worked with its students for the past year to not only overcome fears of water while learning to swim but to develop important life skills as well. The program, kick-started by USC junior and former Trojan swimmer Jamie Christy, includes weekly visits to the school by various USC swimmers. On Nov. 21, in conjunction with the Trojan Swim Club, USC held a fundraising event – the Fall Challenge — for the program. The day before, USC swimmers visited the school for a clinic with students and their parents.

* For the fourth year in a row, USC’s men’s and women’s swimming and diving teams packaged 10,000 meals (on Nov. 10) at Uytengsu Aquatics Center that went directly to the Los Angeles Regional Food Bank. The entire swim and dive team turned out for the event and packaging meals assembly style to give back to the youth of Los Angeles.  “As student-athletes, these kids understand the role they have in helping other people less fortunate than they are,” said Head Assistant Coach Catherine Vogt. “We are just happy to be able to be good representatives of the sport and of USC.” The Trojans partnered with Feeding Children Everywhere, a non-profit organization that works to provide meals to hungry children throughout the world. Student-athletes worked together to measure, package and seal the meals for delivery to the food bank.

* Senior Brianna Weinstein was one of two USC representatives at the Pac-12’s SAAC (Student-Athlete Advisory Committee) conference in November to discuss various conference issues. In addition to the meetings, the Pac-12 athletes spent time with Special Olympians, unifying in some competitive bowling and heartfelt camaraderie.

* USC’s swimmers and divers annually participate in and raise money for Troy’s multi-million-dollar benefit, Swim With Mike, that raises money for college scholarships for student-athletes with physical challenges. The annual swim-a-thon was established in 1981 and was originally scheduled to be a one-time event. It was organized by friends and teammates on behalf of Mike Nyeholt, a three-time All-American swimmer who was paralyzed from the chest down following a motorcycle accident suffered in January of 1981. More than $58,000 was raised in the first swim and the total has since swelled to close to $17 million with nearly 200 total scholarships granted to 90 universities, representing 60 sports. While USC’s annual event is set for April 2, fundraisers have sprouted to many schools, including Cal, UConn, Hawaii, Stanford, Arizona and UC Santa Barbara. For more information, go to SwimWithMike.org.