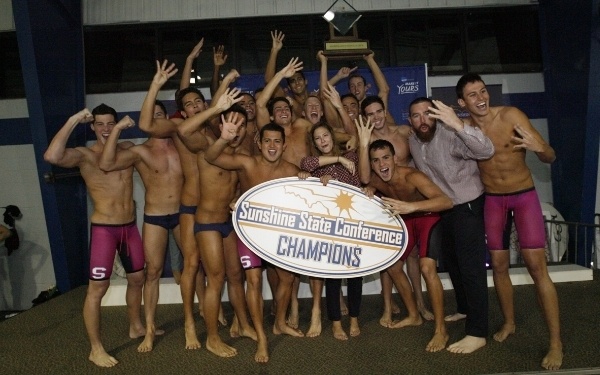 Florida Southern earned their fourth consecutive men's title as their women's squad picked up their first during the 2016 Sunshine State Conference in Orlando, FL. Current photo via Florida Southern Athletics

Several of Florida’s NCAA Division II powerhouses clashed this past weekend for the 2016 Sunshine State Conference titles. Competing underneath the roof of the Orlando YMCA Aquatic Center, squads from Florida Southern, Nova Southeastern, Tampa, Florida Tech, Saint Leo, Rollins, and Lynn raced at the venue for the fourth time in the conference’s history. The Florida Southern Mocs men captured the championship title for the fourth consecutive year while their female peers snagged their first SSC title to best the Nova Sharks. With several of these athletes awaiting NCAA invites, which will be announced later this week, the state of Florida’s Division II tier teams made statements with several new conference records and lifetime bests.

The first day of racing witnessed just one conference record fall and only by a hundredth of second. Pawel Trenda of Saint Leo entered finals in the 200 IM at fifth, but blasted a record-breaking swim out of lane two for a new SSC record of 1:46.87. The Lions would get another event title from Daniel Bis in the 1000 free as the Polish native turned in a 9:11.21, roughly ten seconds off his 2015 championship performance. Bis would claim additional distance wins in the 500 free (4:26.42) and 1650 free (15:28.08) over NSU’s Blake Woodrow, his runner-up competitor in all three races.

Showcasing their sprinting talent, Tampa Spartans Khalid Aldaboos, Jeremy Parker, Jordan Augier, and Martin Hammer reset the conference record in the 200 free relay with a mark of 1:19.09 and was .27 off their own NCAA DII record. This same quartet of athletes arranged in a different order clinched the 400 free relay (2:56.84) on the final night of the championships over the Florida Tech Panthers, who finished second to the Spartans in both freestyle relays. A different grouping of Spartans swept the 200 medley relay the night before in 1:28.63 over Florida Southern’s 1:28.82.

Both of the butterfly event records were smashed by NSU’s Brazilian, Thiago Sickert. He lowered the 100 fly mark in prelims to 47.32 and shaved off a few tenths for an even lower NCAA ‘A’ standard of 47.14. Sickert’s 200 fly race put away the competition with a night swim of 1:46.05 for his second record and he rocked the 100 free (43.79) with the only sub-44 of the field. Anton Lobanov, the Division II reigning record holder in both breast events, posted a 52.65 in the 100 and 1:55.06 in the 200. Additionally, his participation on the 400 medley relay along side Sickert dropped the record down to 3:12.10. Sickert was also in contention for another title in the 50 free, but was eclipsed by Florida Tech’s Nir Barnea (19.98). All together his races accounted for 77 points and multiple gold medal finishes, earning him Male Swimmer of the Meet.

With a big chunk of points going to their rivals with top placements and relay wins, the Moccasin men won their fourth title with depth. Matthew Holmes delivered a new conference record in the 400 IM (3:52.69) while Marco Palacios captured the backstrokes in 47.30 and 1:45.10. The only other win for Southern came from Jesus Marin’s 1:37.15 200 free, but the Mocs stacked several events with 2-3 athletes per each final, solidifying their fourth Sunshine State Conference title.

While the men’s side of the competition boasted several freshly minted conference records, the women weren’t able to set any new standards during their stay in Orlando. The women’s contest was mostly disputed between the Mocs and the Sharks as the former took a strong lead with Alli Crenshaw’s performance on day one.  Crenshaw paced 10:08.82 in the 1000 free to avenge her silver medal finish in 2015 while also capturing the 500 free in 4:57.99 for a pair of gold medal finishes.

Rebecca Matthews not only represented Lynn University with four gold medal finishes, but was dubbed the Female Swimmer of the Meet due to her stellar performances. The Fighting Knight senior acquired the 200 IM (2:02.47) on the first day of the meet by over two seconds and picked up the second medley race with a near seven second lead in the 400 IM (4:19.86) over Nova Shark Courtney DeVeny. Matthews was successful in her battle with NSU’s Malin Westman in the 100 breast (1:02.39) and Saint Leo’s Nicole Weber in the 200 breast (2:14.61) for her second pair of event sweeps.

Tampa swimmers Marisa Barton and Victoria Horsman collected the only two titles for the Spartans during the championships. Junior Barton led her heat with the quickest 50 free (23.03) while the freshman Horsman stood out during the 200 fly final at 2:04.42. The Saint Leo Lions had just one less win than Tampa, but came close to matching their competitors. Canadian Natalia Garriock registered a 56.18 for the top time in the100 fly and almost had a shot for another win in the 100 free (51.02), but Kelsey Gouge of Florida Southern wrapped up that A final in 50.73.

Mike Blum from Florida Southern did a heck of a job keeping the program running at a very high level. A great young coach on the rise. I expect him to make the leap to the Division I level sooner rather than later.