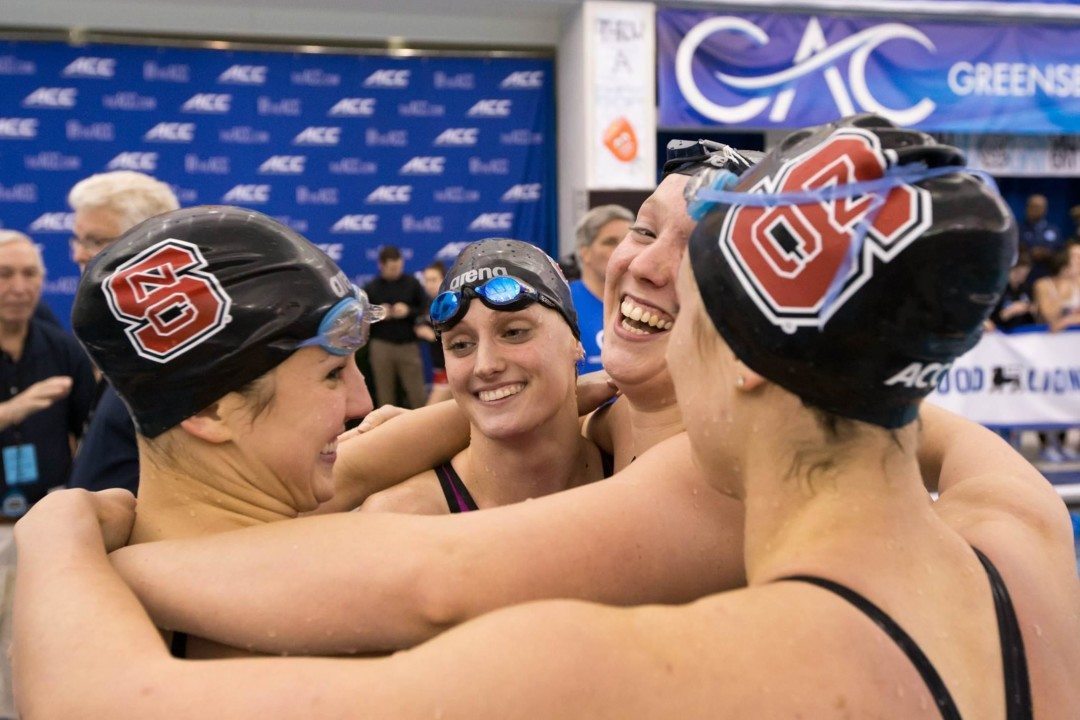 After a long weekend of conference racing, the women (and some men) of the ACC held a long course time trial in the Greensboro Aquatic Center this past Sunday. The meet featured double figures of qualifying times for the US Olympic Trials, although not all of those cut times were achieved by American swimmers or by swimmers that hadn’t already qualified.

Megan Moroney of Virginia got the session started with a qualifying time in the 50 free. It was her first in that event, as she has already qualified in the 100-400 freestyle.

The women’s 100 backstroke top three were all under the time. Courtney Caldwell of NC State made her first OT cut by a mile- she swam 1:01.58 to lead the way. Behind her was Sarah Hutchens of UNC, also making her first time in 1:02.30. Rounding out the trio was Alice Treuth of Notre Dame clocking a 1:02.88.

Emma Reaney led a trio of breaststrokers under the 100 cut. That was nothing new for Reaney, and second place Kinga Cichowska and third place Laura Simon are from Poland and Germany respectively and thus ineligible.

Lydia Jones was another vastly improved NC State swimmer. She upgraded her US Open 200 fly time to a ticket to Omaha with a 2:14.80, just behind already qualified Isabella Paez of Duke.

Krista Duffield was the third Wolfpack swimmer to notch a first time cut. She dipped under 1:01 to win the 100 fly. Hometown girl Natalie Labonge made it four in the same race.

While some of the local North Carolina teams did have men competing in the time trial, they were made up primarily of swimmers that will not compete in the coming week’s ACC Men’s meet. A similar time trial will be held next Sunday, February 28th for the men.

So I guess Emma Reaney is back at Notre Dame? (No longer SwimMAC)?

All times made by swimmers who were rested for their conference meets are pretty slow.
The transition from SCY to LCM is hard for all of them. It’s generally much easier in the opposite way. 🙂

I also think trying to get up and race the day after a long conference meet is tough. The excitement is no longer there, and for many, they are trying to hold on to their tapers. The long pool only makes it worse!

You can say all you want about negative affect of scy swimming, but let’s be honest here… The U.S. has the best system for swimmers to be successful in swimming AND professional life AFTER swimming. This is why plenty of foreigners come to this country!

Other countries don’t have anything like our system with schools and clubs. The comments on LC vs Sc are many times out of proportion and overdone. The memories generated and recognition forever is not understood and famous olympians with their success also have great school memories. The sports culture here is so different that being a U.S. Olympian is different then elswhere. Like the motto “there are no former or past olympians, only olympians”