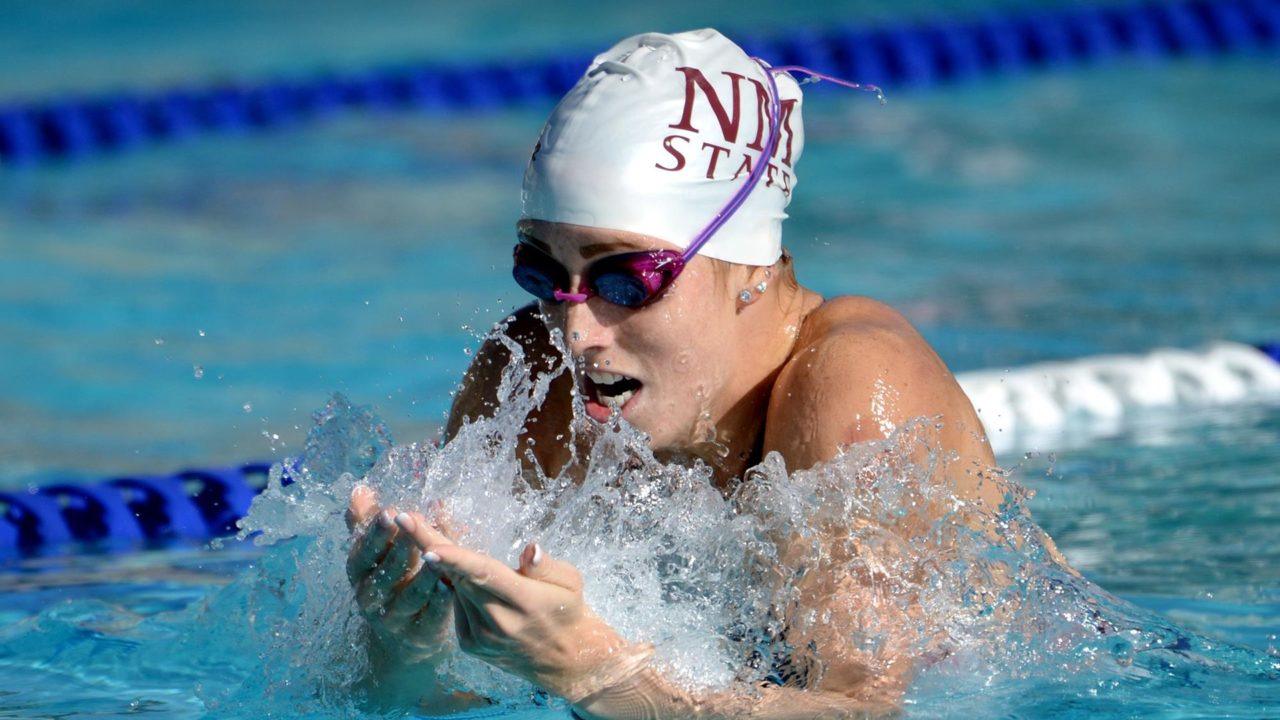 The New Mexico State swimming and diving team dominated the Lancer Invitational in Riverside, Calif., racking up 1,683 points on its way to winning the meet. Current photo via New Mexico State Athletics

RIVERSIDE, Calif. – The New Mexico State swimming and diving team dominated the Lancer Invitational in Riverside, Calif., racking up 1,683 points on its way to winning the meet.

“This was a great experience for our team and I’m really excited and proud of the grit we showed this weekend,” said head coach Rick Pratt. “It was a lot of races in three short sessions and our team had infectious energy on deck.  It was a great way to finish off the year and move into the second half of our season. Standout performances came from many individuals, but our upperclassmen really impressed me how they lead our team in and out of the pool.”

The Aggies started the day with a victory in the 200 Medley Relay from the squad of Alix Knagg, Hanna McGowan, Reagan Nentwich and Neza Kocijan finishing first in 1:44.41 to earn 40 points. NM State also had the second place team as Barbora Krizanova, Ashley Reynolds, Lindsey Muiznieks and Makena Sutherland recorded a time of 1:45.11.

Next, New Mexico State picked up another relay win to conclude the morning session with Ivanov, Laporte, Houde-Camirand and Wegel finished first in the 800 Free relay at 7:35.65. The Aggie team of Harston, Hemburrow, Oliva-Aun and Knagg placed second (7:39.25).

The Aggies are back in action when Idaho visits the Swimming and Diving Complex on Monday, Jan. 7, at 2 p.m. (MT). All fans receive free entry to all NM State swimming and diving home meets.

RIVERSIDE, Calif. – Isabella Rhodes continued a dominant week for California Baptist University, with six top-three finishes, including three wins, on the final day of the Lancer Swim/Dive Invitational on Saturday.

CBU finished second in the event, with 1,179 points, behind Western Athletic Conference foe NM State (1,683). The Lancers will return from Christmas break for their final two home events of the season, a dual with Claremont-Mudd-Scripps at noon on Jan. 4 and a tri-dual with Grand Canyon and Wyoming on Jan. 5 at 1 p.m.

Rhodes provided the big highlights again for the Lancers on Saturday, with individual wins in both the 100-yard individual medley and 100-yard freestyle in 57.13 and 50.66 seconds, respectively.

“Isabella is just showing how talented a swimmer she is,” Coach Rick Rowland said. “We knew it when we signed her a year-and-a-half to go. Her times were rocking, she put herself on CBU’s all-time list in the 200 IM, 100 free and 100 fly this week. She just tore it up, without a doubt the swimmer of the week on the women’s side.”

The redshirt freshman also swam on the victorious 400-free relay team, which included Rita Smirnova, Grace Oeser and Hannah Parson and clocked a 3:28.58 — an automatic qualification for the 2019 College Swimming & Diving Coaches Association of America National Invitational Championship. Her 100 IM time was well under the automatic qualifying mark (58.94) for the 2019 NIC. The Idaho native’s 100 free time earned NIC consideration, along with her 55.52 in the 100 butterfly, which was also good for second place.

“It’s great to qualify everyone we did this week, we already booked some plane tickets so we have to get some bodies in those seats,” Rowland said. “The team is excited to compete there for the first time. There are going to be some big teams there.”

In the 100 back, Rhodes almost had another win but took third in 57.74, with CBU teammate Andrea Laliena on her heels in fourth (58.36). She also swam on the 200-medley relay team, with Robin Smallwood, Kylie Morrison and Smirnova that took third in 1:46.35.

Mackenzie Mergel and Parson added runner-up finishes for CBU in the 1650 free and 100 free, respectively. Parson finished just behind Rhodes in the 100 free with an NIC consideration time of 51.91, while Mergel’s 17:39.55 was good for second in the mile.

“Parson had a great week, she swam well in a lot of different events for us this week,” Rowland said.

RIVERSIDE, Calif. – The Fresno Pacific men’s and women’s swimming and diving teams wrapped up the Lancer Invitational on Saturday with strong racing. Olga Tovstogan highlighted the day with two victories and a school record for the Sunbirds.

QUOTABLE:
• “We came into today’s sessions with some fire and passion to race hard and dive sharp. We finished with a few lifetime bests, a school record, and some season bests. Very pleased with how we turned around from yesterday’s session.” – head coach Katelyne Herrington