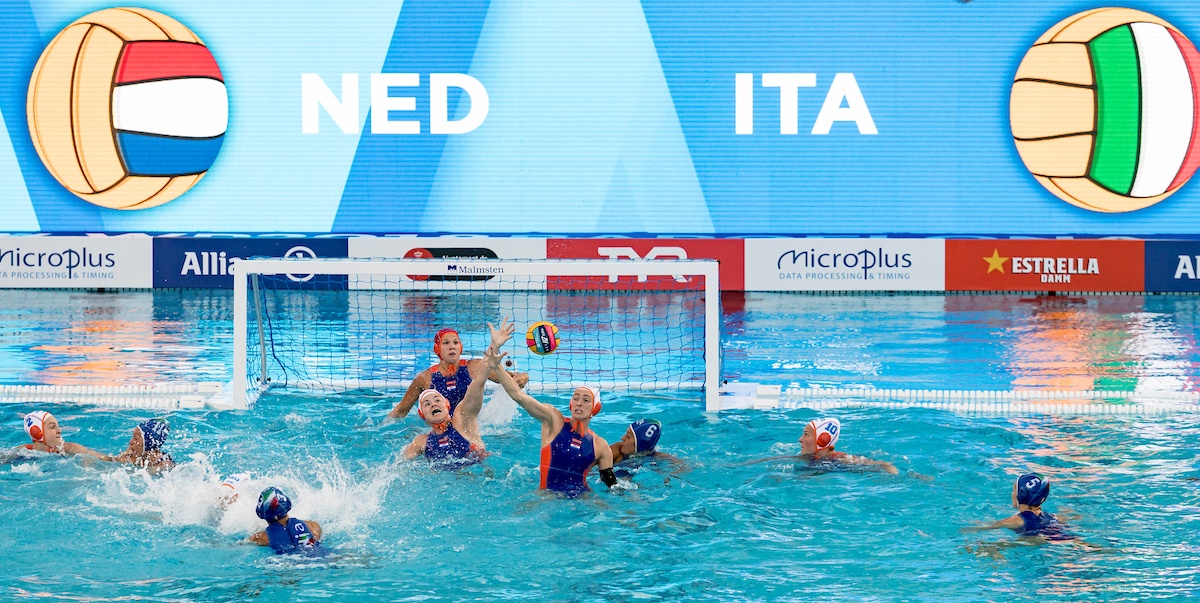 Lengthy scoreless periods, incredible twists marked the day’s big game featuring European Championships runner-up Netherlands and Olympic silver medalist Italy which ended in a 6-6 tie in the third round of the women’s tournament. So far nothing has been decided in the prelims at the European Water Polo Championships in Barcelona.

The evening thriller offered a series of twists and turns. For a while Italy seemed to sit comfortably in the driving seat, they led 1-2 after the first eight minutes, then deep into the second they took a 2-4 lead while the Dutch offense fell apart, they missed four man-ups in a row. In the meantime Italy had two 6 on 5s to widen the gap to three goals but missed both. The second turned out to be crucial as Catharina van der Sloot scored from the ensuing counter, halting the Netherlands’ miserable 11:35min run without a goal. And 53 seconds later it was even, van der Sloot netted a fine one from the distance and that froze the Italians.

They missed two more extras so it stood 4-4 before the last break and the Dutch rolled on, with two action goals within a minute they led 6-4 with 6:35 to go. Italy missed another man-up, the 5th in succession, and soon the Dutch had one to break three goals clear. This time they couldn’t make it, and to mirror the earlier phase, Arianna Gragnolati finished a counter, ending Italy’s goalless struggles of 15:40 minutes. In 59 seconds it was even, Roberta Bianconi buried a penalty for 6-6. What’s more, with 1:24 remaining Italy had a match-ball but could not even take a shot in their man-up. The Dutch also ran out of ideas so the game ended in the championships’ first draw, leaving room for a series of outcome in the group.

Israel had a promising match against France, the newcomer side came back from 4-1 down to 5-4 by halftime, but the rival’s experienced players closed down the match in the third with a 3-0 run. The rest of the games all saw 20+ goals from the favorite sides, Spain could even go beyond 30 against Turkey.