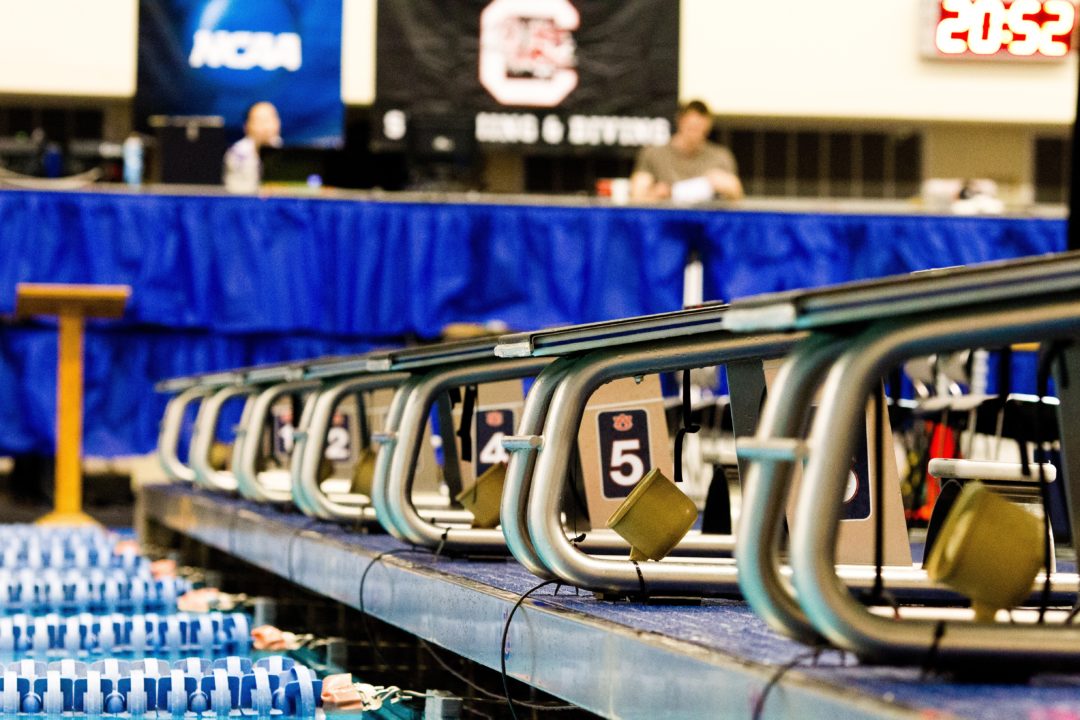 The NCAA swimming rules committee has tabled the two most earth-shaking rules proposed to them, but did recommend other changes. (Photo: Tim Binning/TheSwimPictures.com)

The NCAA Swimming Rules Committee has made its proposals for changes to the swimming rules books for the 2013-2014 season, and perhaps the most notable decisions were the ones not taken.

The committee “tabled its discussion” on the two most fundamentally sport-changing rules in the books. One is the rules put forth before the rules committee of FINA, the international governing body for the sport, regarding the number of underwater dolphin kicks. Specifically, FINA is considering allowing an unlimited number of underwater dolphin kicks, only off of the start, until 15 meters.

The NCAA has committed to revisit the proposal on the underwater dolphin kick if FINA changes the rules internationally.

The other discussion that was tabled for now regarded allowing some sort of underwater “wedge” for the backstroke start. The committee indicated that they would need to see more information about the exact nature of such devices before deciding whether or not to allow them going forward.

“The committee has heard of meets out there where there is only one official,” said Todd Peters, committee chair and women’s swimming coach at Minnesota State Moorhead, in a release by the NCAA. “One official can’t cover an entire meet. They just can’t watch for everything.”

The other changes they recommended included proposing a change where all heats can be scored at dual, tri, or quad meets; expanded use of video review to evaluate relay takeoff equipment (which most governing bodies have been reluctant to enact), and making the FINA Short Course World Championships a bona fide competition for NCAA qualifying purposes.

The latter of those rules is likely only possible so long as the NCAA maintains rules consistent with those of FINA, because unlike at USA Swimming meets, it’s unlikely that FINA officials would be willing to certify a different set of rules than their own.

I seriously doubt any career flyer is going to win a breaststroke event solely by allowing them to kick out one wall after having done a full pullout (maybe 5-8 yards of dolphin kicks?)

Hmmm….how about the breast leg on an IM….definitely helps a flyer in short course…
Personally, I think it is stupid if it passes.