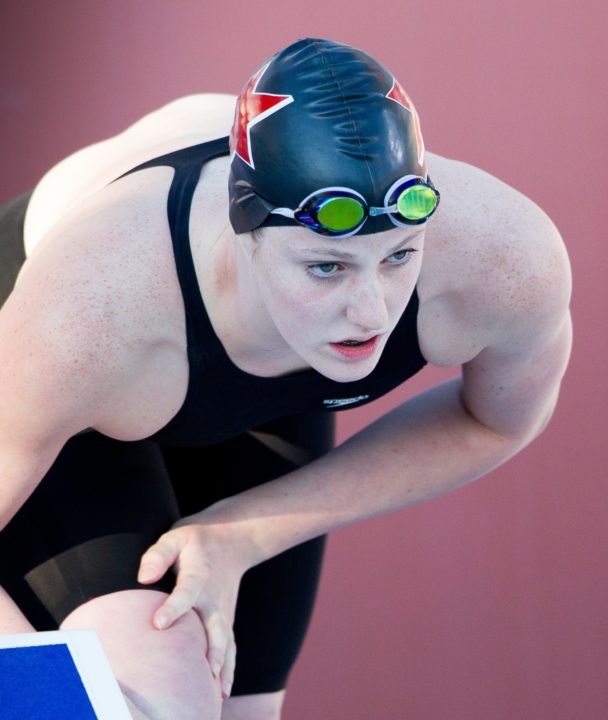 In what had become an intense debate in the state of Colorado (at least among those in the high school swimming circuit), Missy Franklin has decided to go for one more season of high school swimming, finishing out her senior year for Regis Jesuit while still training for next summer’s World Championships.

After she swam through her junior year despite Olympic preparations, one can imagine the intensity that isn’t usually present at high school swimming meets. Media at every one, press conferences, police escorts through throngs of giddy fans, and even an ESPN3 broadcast of the State Championship meet; all of this jammed into small, high school pools with no media staff to control the onslaught.

That can be a lot of pressure in a high school schedule where meets are every week, or even more frequent. Franklin, though, after much personal reflection, has stuck true to her desires to be a part of a team – which is the reason why she didn’t turn pro before experience two years of college swimming at Cal first.

Franklin will take a shot at breaking some National High School Records this year; as hard as it is to believe, she doesn’t hold a single overall record (though she does have the Independent School marks in the 100 free, 200 free, and 100 backstroke). If the Minnesota Grand Prix a few weeks ago are any indication, she could very well break all three of those records this year, and perhaps the 50 free as well if given the opportunity.

The Colorado 5A HS State Championship meet will be held February 8th and 9th at the same pool it was in last year, EPIC in Fort Collins, Colorado. Wednesday is the first date that Colorado girls’ teams are allowed to hold official meets, and Nick Frasersmith’s squad begin tonight with a big meet against Chaparral.

The full Regis Jesuit schedule is below.

Two duals against the same school 6 days a part? Can’t say I’ve ever seen that..

I was wondering about that too; wonder if that is a typo or included from the boy’s team schedule by mistake. I know Franklin is a nice person, but I’m glad she didn’t cave to pressure from swimmers or others who were saying she should sit it out and give other swimmers a chance to be state champions. That goes against everything competition is about, and anyway, who would want a championship title that had an asterisk because “Missy felt guilty and sat it out”? That would have been ridiculous. As for the packed house at states, they should simply limit the media coverage(which should be smaller this year anyway) and make sure they give parents preferential seating to avoid… Read more »

I highly doubt with her training AND Grand Prix events that Missy will be swimming EVERY high school meet. Todd Schmitz and Missy will find a way to make it work without messing up her preparation for World Champs this summer.

How much training does Missy do with them? And will she swim in all of the meets? I find it pretty hard to believe a dual meet against a HS team is taking precedent over her training.