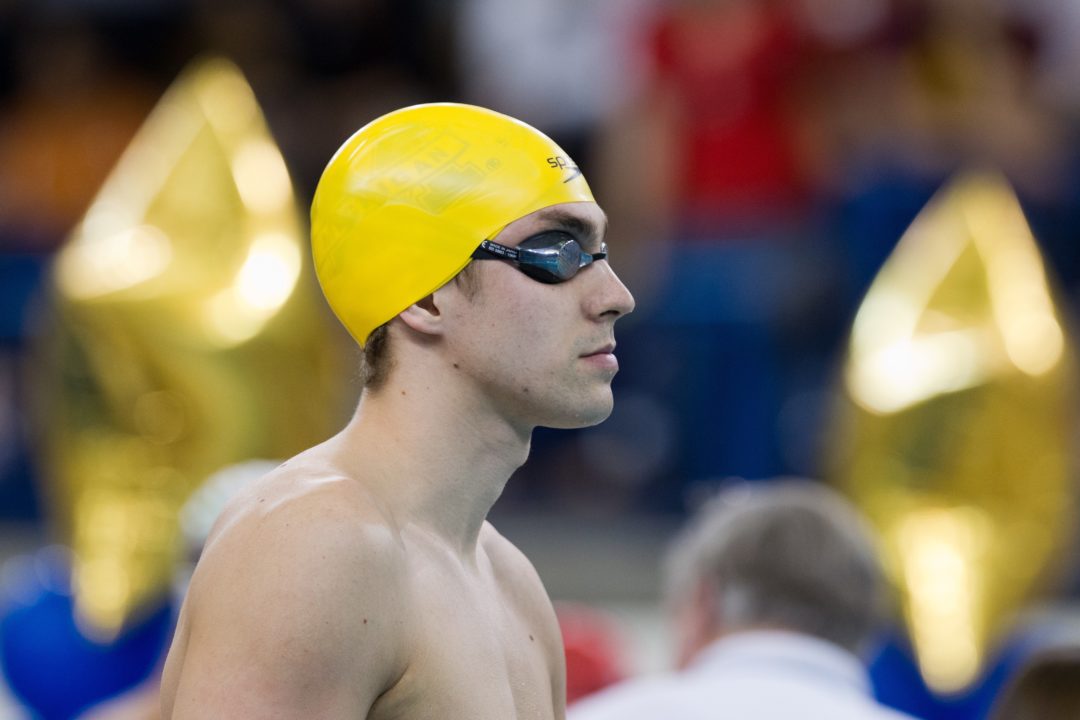 Michigan announced their full recruiting classes today both for the men and the women. (Photo Courtesy: ©Tim Binning/TheSwimPictures.com)

The University of Michigan announced their fall signing classes this morning for both the men’s and women’s teams. This is the first year that head coach Mike Bottom has been in charge of both the men and the women, and he seemed to come through recruiting pretty well.

On the women’s side, he only has 6 in the class so far. Expect him to keep working to supplement that in the spring, as the Michigan women are graduating 10. With a late announcement of Bottom taking over the women’s program, though, a late start to recruiting could have been at least a partial factor.

The Michigan men added a bigger class, but had a lot of holes to fill as well. This was not the best class Bottom has had at Michigan, but it is fairly deep with a bunch of guys ranked in collegeswimming.com’s 50-150 range.

The Michigan SID Brad Rudner did a great job of breaking down the classes in his press releases, so we’ll turn the page over to him.

“We feel extremely fortunate to bring these six women into our program here at the University of Michigan,” Bottom said. “We started the process late. On the swimming side, to be able to get athletes of that caliber is so incredibly exciting. Each of them competes at a very high level and they all have great work ethics. They will fit in perfectly with the culture we’re creating.”

“Both Carly and Keegan are very talented divers, and are among the best in the state of Michigan this year,” Li said. “Their additions will only strengthen our team. They are extremely dedicated individuals that strive to make the team better.”

Frost is a sprint freestyle and backstroke swimmer who trains with Club Wolverine. She is ranked the third-best swimmer in the state of Michigan according to CollegeSwimming.com. Frost won a state title as part of the 400-yard freestyle relay team at the 2012 MHSAA D-I state championships (swimming the anchor leg) and also set two career-best times, finishing second in the 50-yard freestyle, and fourth in the 100-yard backstroke. A team captain, Frost was an all-state selection all four years at nearby Saline High School and is also a 10-time All-American.

McCaffrey is one of two divers in this year’s recruiting class, competing for Legacy Diving Club. She finished third on the one-meter at the 2012 MHSAA D-II state championships and finished 10th in that event in 2010. McCaffrey has participated at numerous USA Diving Zone and Regional Championship meets, including a ninth-place finish on the one-meter board at the 2012 USA Diving Summer Junior Region 4 Championships.

Michigan loses 10 student-athletes to graduation at the end of the year.

“This is a group of guys with high potential and great heart,” Bottom said. “They are competitors in the truest sense. Combined with our current culture, we would expect they’ll be producing at a high level within two years.”

“Ryan is a very good diver and is a great addition to our team,” Li said. “He’s only been diving for two years, so he’s still pretty new to the sport, but at the same time, he has a ton of potential. We think Ryan can score points for us at Big Tens and NCAAs in the future.”

Chen swims for the Pleasanton Seahawks Aquatic Club and mainly focuses on the backstroke. He is a high school teammate of fellow signee Bryan Hughes. He finished 11th in the 100-meter backstroke and 21st in the 200-meter backstroke at the 2012 Speedo Junior National Championships.

Eaton primarily works in the sprint freestyle races, but can also swim the butterfly. He swims for Mount Hood Aquatics Club. Eaton is ranked as the No. 3 swimmer in the state of Oregon according to CollegeSwimming.com. He is a five-time Oregon State (OSAA) champion, and holds high school state records in the 50-yard freestyle and 100-yard freestyle. He swam at the 2012 U.S. Olympic Trials and 2011 Speedo Short Course Junior National Championships and was also a USA Swimming Scholastic All-American.

Goethe is the only Michigan native in this year’s class, specializing in the sprint freestyle races for Kronos Aquatics Club. He is ranked as the No. 8 swimmer in the state of Michigan, according to CollegeSwimming.com. At the 2012 MHSAA D-II state championships, Goethe won the title in the 50-yard freestyle and finished second in the 100-yard freestyle. He also attended the 2012 Speedo Junior National Championships, swimming the 50-meter freestyle.

Hughes is a multiple-event swimmer for the Crow Canyon Country Club Sharks. He is a high school teammate of fellow signee Jason Chen. Hughes is the No. 123-ranked swimmer in the country and No. 16 in the state of California by CollegeSwimming.com. He finished 11th in the 200-meter butterfly at the 2012 Speedo Junior National Championships. Hughes was a four-time NISCA All-American in 2011-12.

Mangan swims club for New Trier Swim Club, focusing on the sprint freestyle and backstroke events. He is the No. 46-ranked swimmer in the country and No. 4 in the state of Illinois, according to CollegeSwimming.com. Mangan swam at the 2012 U.S. Olympic Trials in the 100-meter backstroke and 200-meter backstroke. He is a six-time All-American and a member of the NCSA All-America team. He was a part of the 200-yard medley relay team that set the national 15-18 age group record. Mangan was also a 2011-12 USA Swimming Scholastic All-American.

Stitt competes for Tualatin Hills Swim Club, mainly competing in distance events. He is the No. 76-ranked swimmer in the country and No. 2 in the state of Oregon according to CollegeSwimming.com. Stitt is a two-time Oregon State (OSAA) champion in the 500-yard freestyle and qualified for the 2012 U.S. Olympic Trials. He was a USA Sectional qualifier in 2011 and was a finalist in the 400-meter freestyle at the 2012 Speedo Junior National Championships.

Tafuto swims for the Hershey Aquatics Club, specializing in the sprint freestyle events. He is the No. 116-ranked swimmer in the country and No. 1 in the state of Pennsylvania by CollegeSwimming.com. Tafuto had the fifth-fastest time in the 50-yard freestyle at the 2012 Pennsylvania state championships.