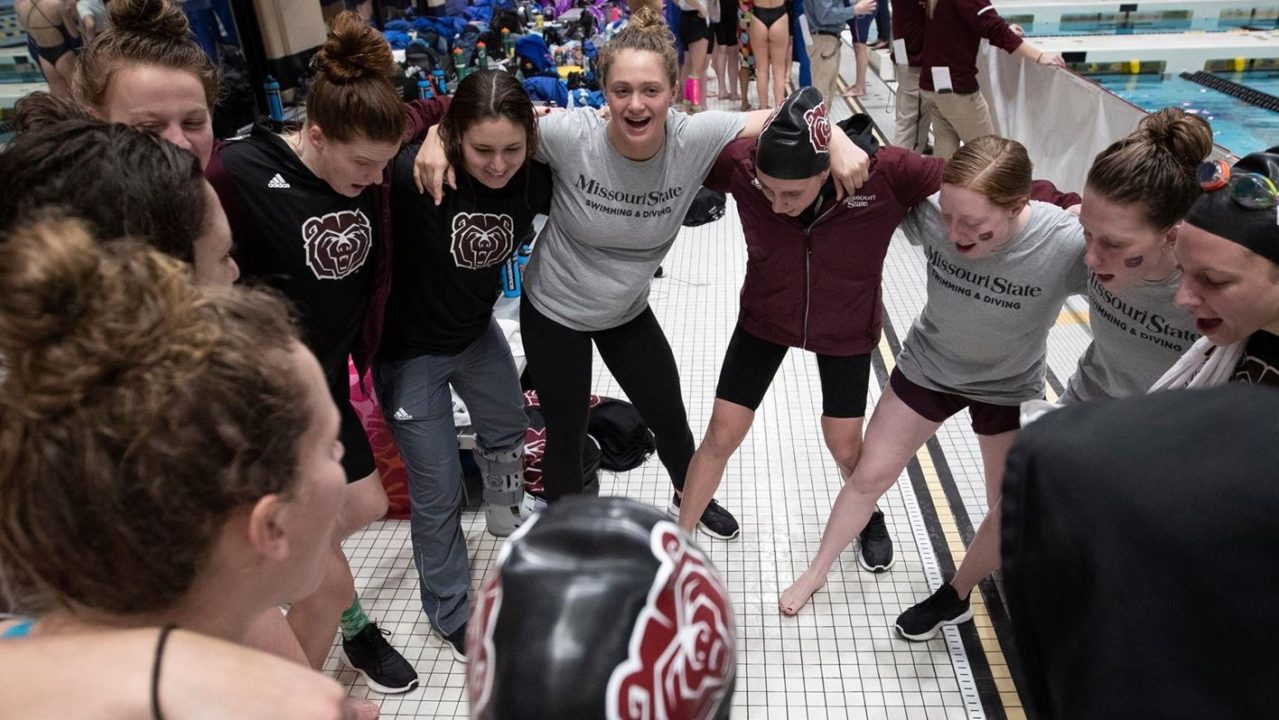 Missouri State has been unanimously selected by the league coaches as the favorite to win the Missouri Valley Conference women’s swimming and diving title. Current photo via Missouri State Athletics

ST. LOUIS – Missouri State has been unanimously selected as the favorite to take home the Missouri Valley Conference women’s swimming and diving title in a vote by the league’s eight head coaches.

The Bears took home the crown at the 2019 championship, capturing their 15th title since the 2002-03 season. Missouri State, under the leadership of eighth-year head coach Dave Collins, brings back three first-team and nine honorable mention All-MVC honorees.

Libby Howell highlights the returners after winning three individual events at last year’s championship, while teaming up with fellow Bears to capture a trio of relay titles. She is joined by Anna Miller, who finished second in the 50 free, and Alex Thorson who took third in the 200 free. Both Miller and Thorson were apart of two championship relays.

Southern Illinois, led by first-year head coach Geoff Hanson, captured 54 points to finish second in the poll. The Salukis return dominance in the diving well with Beibei Ji and Baobao Ji returning. The duo took the top two spots on both the 1-meter and 3-meter boards last season. First-team honorees Eden Girloanto and Laura Carver are also among the returners for this year.

Collecting 44 points, Indiana State comes in at third. The Sycamores have three 2019 first-team All-MVC selections returning, including Kendall Hansen, Alex Malmborg and Marlene Pavlu Lewin. Hansen had a big performance at the 2019 championship, recording a pair of top-three finishes in the 100 and 200 backstroke events. Five honorable mention all-conference swimmers round out the key returners for ISU.

UNI tallied 43 points in the poll to finish in fourth. The Panther returners include Katie Taylor and Moriah Ross, who both won a pair of events in 2019, as well as fellow first-team honoree Lauren Havertape. Kylie Engstrom is also among the team’s top returners after earning honorable mention all-conference honors in 2019.

Illinois State’s 34 points earned a fifth-place spot in the poll. The 2019 Diver of the Year, Caroline Lecoeur will be back this season, along with two first-team swimmers, Kierston Farley-Sepe and Jensen Keck, for the Redbirds. Illinois State will be under new leadership as first-year head coach Caitlin Hamilton takes the reigns.

Totaling 23 points, Little Rock finished sixth in the vote. The Trojans are led by Amy Burgess in her 12th year as head coach. Burgess will bring back two honorable mention All-MVC honorees from 2019, Lea Zengerling and Palmer Ristroph.

Coming in seventh is Evansville with 16 points. The Aces will have a new leader at the helm as Stuart Wilson takes the lead. This year’s team features 17 underclassmen, including seven freshmen. Among the returners is the 2019 Freshman Diver of the Year, Fae Keighley.

Valparaiso rounds out the poll with 10 points. The Crusaders have a new head coach as Maggie Kroemer took the reigns in 2019.