Belmonte Entered in 5 Individual Events for Rio, Races Hosszu in 3 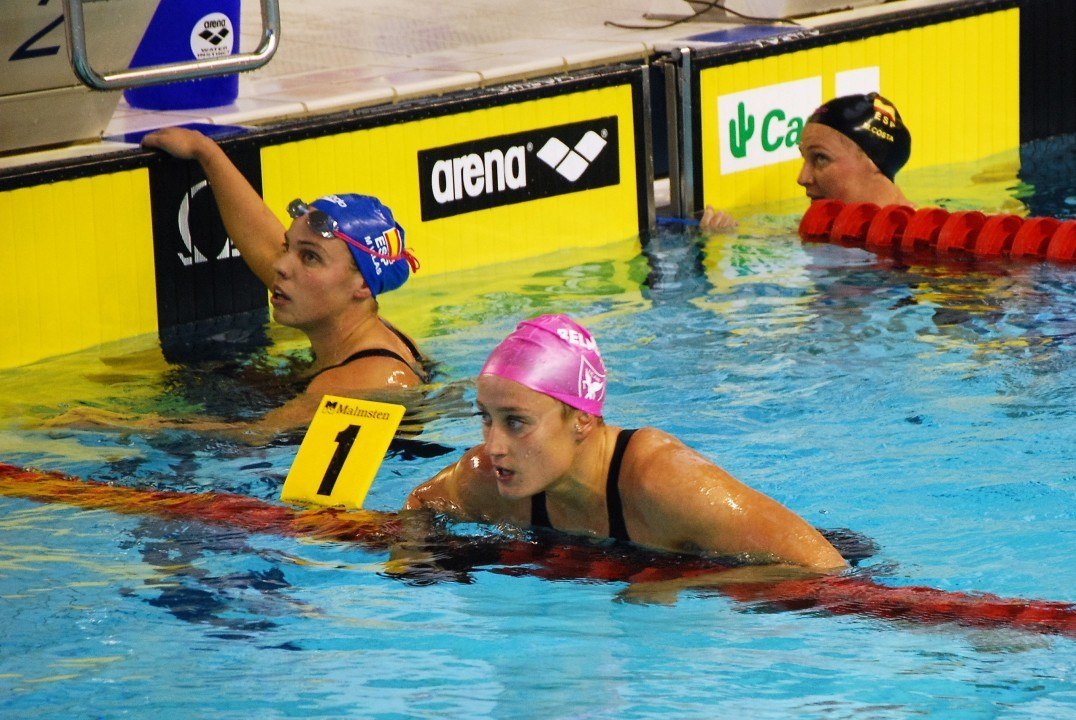 Mireia Belmonte may spend more time racing than any other female swimmer at the Olympics this August, excluding open water. Her individual event schedule will include a total of 12 swims spread across the first seven days of competition, culminating in 4,400 total meters spent racing. Current photo via Daniela Kasper

With a total of five individual events and one probable relay on her schedule, Mireia Belmonte may spend more time racing than any other female swimmer at the Olympics this August, excluding open water swimmers.  Her individual event schedule will include a total of 12 swims spread across the first seven days of competition, culminating in 4,400 total meters spent racing, should she final in every event.  If both prelims and finals of the 4 x 200 free relay are included into her schedule, Belmonte would swim 14 times for a total of 4,800 meters.

Belmonte, while being ranked third in the world in both the 200 fly and the 400 IM, will have to climb much higher in the rankings to final in the 200 IM, 400 free, and 800 free.  Some of her fiercest competition will come from Hungarian Iron Lady Katinka Hosszu, who is ranked first in the world in the 200 and 400 IMs, and American distance queen Katie Ledecky in the 400 and 800 freestyles.

Belmonte and Hosszu will race again in the 200 fly, battling one another three times all together for a spot on the podium in individual events.  If the recent European Championships in London served as a preview for each Spain and Hungary’s relay line-ups, the two will face off again in the 4 x 200 free relay.  In the table below, Belmonte and Hosszu’s individual races are accounted for.  A more thorough look at Hosszu’s events in Rio can be found here.

Hosszu will have two more swims than Belmonte, excluding relays for either, though with Belmonte swimming the 800 free, her overall distance is much greater than Hosszu’s.  At the 2012 Olympics in London Belmonte swam the same schedule, and won silver in both the 200 fly and 800 free.  She was off the podium in the other three events, finishing 8th in the 400 IM, 10th in the 200 IM, and 13th in the 400 free.

Since 2012 Belmonte has expanded her repertoire to also include the 1500 and open water.  Though she placed third in the 1500 free at the 2016 European Championships in April, the distance is not offered as a women’s event in the Olympics.  Belmonte also vied for an Olympic berth in the 10k open water swim, but placed 28th and did not earn the opportunity to race the 10k in Rio.  However, Spanish teammate Erika Villaecija did earn an Olympic berth in the 10k.

Supposing Belmonte advances to the finals in each of her five races and participates twice on the 4 x 200 free relay, her Olympic schedule will be as follows:

Belmonte will be lucky to go top eight in the 400 Free behind Ledecky, Smith, Ashwood, Kapas, Balmy, Boyle, Carlin & McClean…
400 Free Final will be smoking fast!

She just went 4,05 after coming down from altitude training, she has a 4,02 in her, will fight for third place.

Belmonte = That kid on your college team you always felt bad for. Every dual meet = Some combination of 1000 free, 200 fly, 500 free, and 400 IM. Every time. No relays. Just 3 of those individual events each time. Would like to see her on the medal stand at some point.

She is ready to medal in 200m fly, 400m IM, 800m free, especially without tapering in 2016 she will improve a lot on this games
Maybe she can medal in 400m free and 200m IM, it will depend by how many seconds she can drop in Rio
I feel that Mireia is in the best shape ever

I hope so!
She’s such a fearless swimmer.