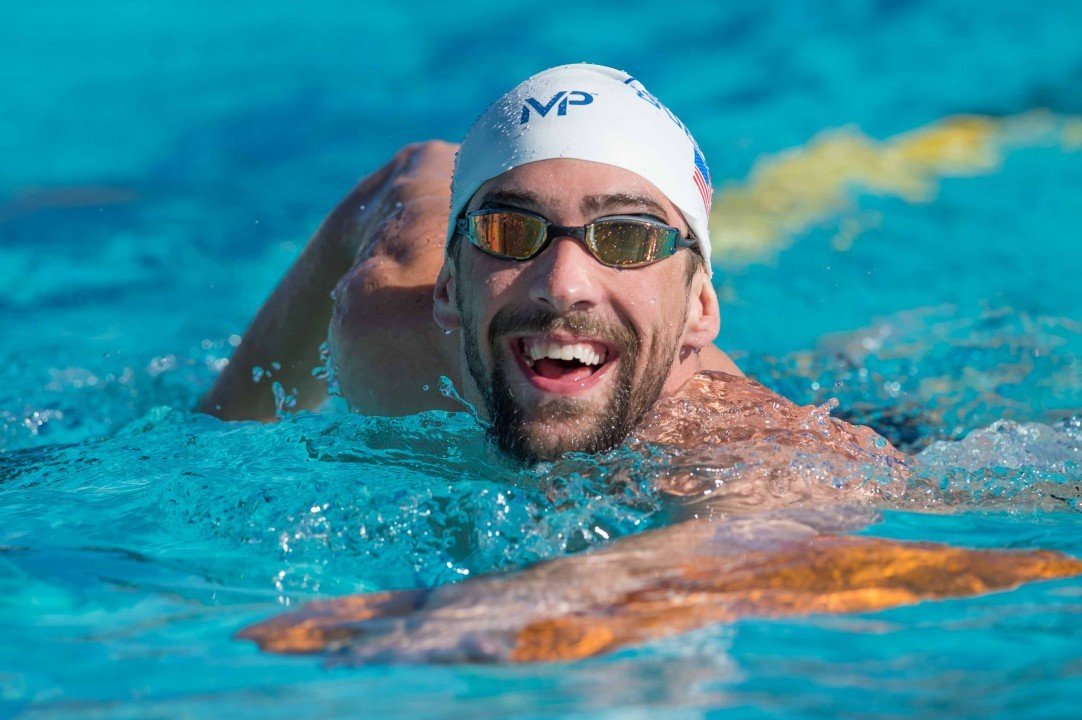 Michael Phelps continues to lengthen his event ranges post-comeback, entering the 200 butterfly at the Arena Pro Swim Series Charlotte meet. Barring a scratch, that would be Phelps' first 200 fly since the London 2012 Olympics. Archive photo via Mike Lewis/Ola Vista Photography

Michael Phelps continues to lengthen his event ranges post-comeback, entering the 200 butterfly at the Arena Pro Swim Series Charlotte meet. Barring a scratch, that would be Phelps’ first 200 fly since the London 2012 Olympics.

Phelps, of course, swam the 400 free at the Mesa stop of the Arena Pro Swim Series, and with the reputations of him and coach Bob Bowman to be aggressive with swimming longer races at mid-season meets, it seems very likely we’ll see Phelps go through with his 200 fly entry.

Beyond Phelps, this meet is absolutely loaded with big names. Ryan Lochte is entered in 8 different races, though he’ll have to drop at least one to get under the Pro Swim Series cap of 7. The meet takes place right in Lochte’s backyard, and a number of his SwimMAC teammates will be joining him, including Tyler Clary, Ariana Vanderpool-Wallace, Micah Lawrence and Katie Meili.

On the women’s side, Elizabeth Beisel leads the points, and, as has been her strategy all year, entered herself in more events than she can swim, and can choose her entries based on the competition. Beisel is in 8 events, including the 400 and 800 free, which are underrated scoring threats for the well-known IMer.

Beisel will look to hold off last year’s points winner Katinka Hosszu, who leads the field with no less than 17 event entries. Hosszu will have to cut that number in half and then some to get under the cap, but will have her pick of events to maximize her cash earnings.

The Charlotte stop of the Arena Pro Swim Series begins next Thursday, May 14th at the Mecklenburg County Aquatic Center, and runs through Sunday, May 17th.

SwimIsFun987 – Typically, college athletes have to be unattached for a brief period as they switch over from their college team to their summer club. As for the NCAP affiliation, Conger’s coach Sue Chen just moved over to NCAP, so it’s likely he followed her there with his club affiliation: http://swimswam.com/ncap-hires-former-machine-rockville-montgomery-coach-sue-chen-to-work-with-gemmel-ledecky-site/

Kate Ziegler definitely has the talent to get back onto the Olympic team in the 800. Go for it, Kate!

Michael Phelps is racing Conger and Seliskar in the 200 fly?? Yessssssss

This is going to be a great meet

huge honor for the young boys & probably the happiest day of their lives if any one of them can outswim the Flying Fish at Char pro swim…hahaha 😀 yesss MP training the 2fly again, oh my god…he heard the Phans’ wishes…love you Michael! cant wait to watch. 😀 😀

THAT’s more like the old Michael Phelps we know and love! Just go out there and RACE the best and see what you’re capable of with the training you’ve done! Don’t worry so much about winning or what people will say if you get beaten. This way you/we can compare your times with what you used to do during hard training! 🙂

if all the people listed on the psych sheet actually show up, wow!!! Cielo, Fratus, and Santana – Phelps, Seliskar, and Conger, and on and on