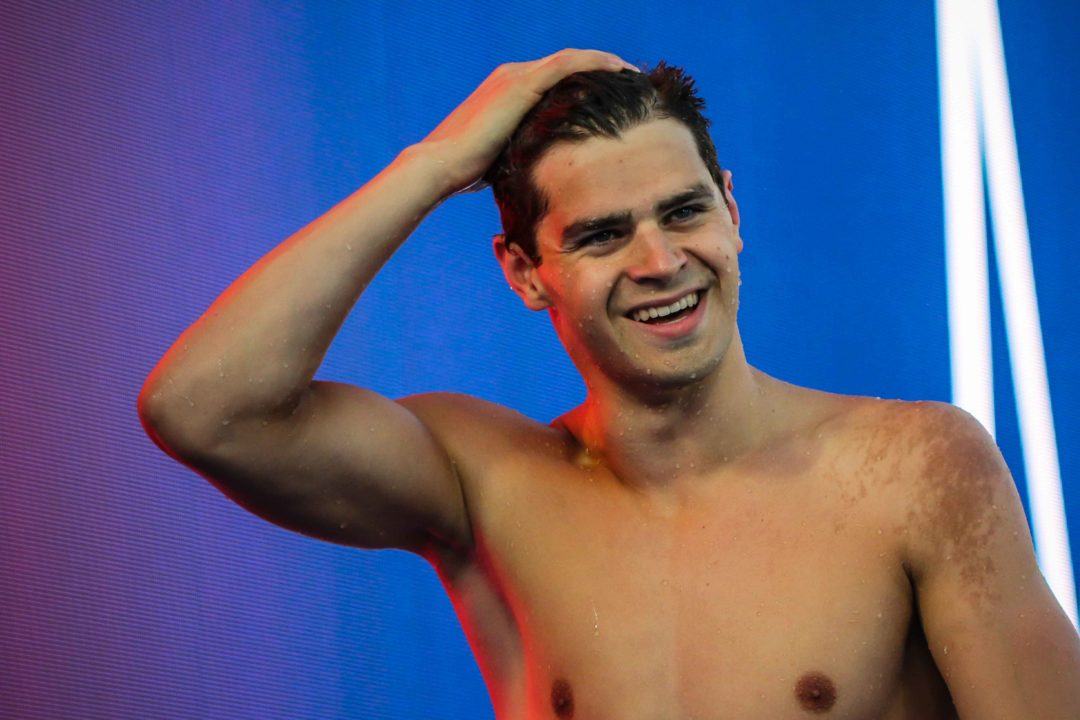 Michael Andrew brought in a prize money haul in Des Moines, winning five events and earning a big relay bonus to lead all money earners on the 2019 Pro Swim Series.

With USA Swimming giving $1000 ($250 apiece) to the winning relay, plus $1000 ($250 apiece) to the relay with the fastest composite reaction time (an add-up of the three relay reaction times on each relay), the athletes showed which bonus they clearly felt was easier to attain. With athletes pushing their relay starts in the hunt for the $1000 bonus, three of the four SwimSquad relays disqualified. (The Jaeg-train had reaction times of -0.06 on Andrew Wilson and -0.08 on Gabby DeLoof. The DiRadSquad had a -0.07 from Jack Conger and the Beisel Bunch got a -0.06 from Michael Chadwick).

That meant the only relay to finish the race – Adams Family’s Jacob Pebley, Annie Lazor, Kelsi Dahlia and Andrew – won both the winning $1000 prize and the $1000 relay start prize. That added $500 to Andrew’s winner’s purse from Des Moines.

In the hunt for the overall series title (and $10,00 bonus), Kathleen Baker has overtaken the absent Katie Ledecky for the top swim on the women’s side. Baker’s 100 backstroke was worth 946 FINA points, and runner-up Olivia Smoliga also beat Ledecky’s top score of 937 from Knoxville.

On the men’s side, Will Licon surged in the 200 breast to tie the top swim of the series, a 100 back from Ryan Murphy (also absent in Des Moines). But Murphy maintains the tiebreak based on a better FINA score in his second-best event.

*Murphy wins the tie with Licon at this point, based on his better second-best FINA points score, an 894 200 back from Knoxville.

Does anyone know if the Stanford pros are going to do a rested March meet???

snow settles over westeros, the dragons have burned everything to a crisp. the Starks, Lannisters, Targaryens are all gone. the people rally behind their one true leader and he rules with an iron fist….Hot Pie

It’s obvious that traditional training will give you a larger drop with taper. It’s not obvious that the final time would be better with traditional swimming. Definitely not for everyone. If you assume that MA would be the same speed at the end of the season with traditional or USRPT then how could anyone argue that USRPT is not the best choice for him? It allows him to clean up at these money meets.