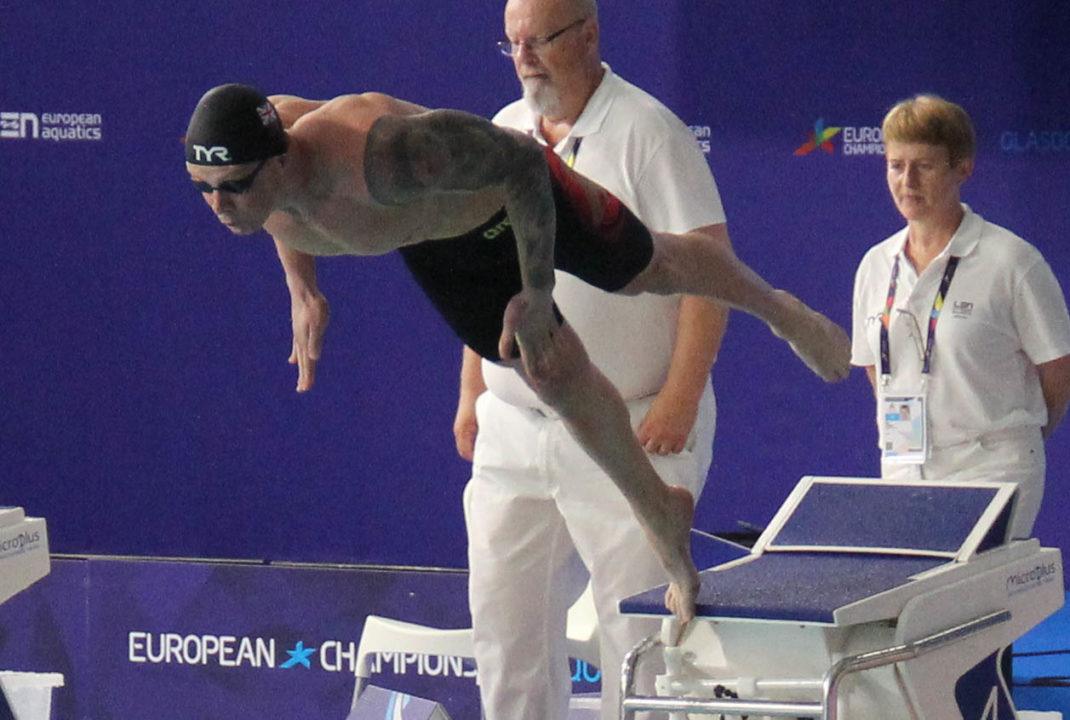 Adam Peaty put up a strong 26.87 50m breast this morning in Canet to take the top seed in a new Meet Record-setting time. Archive photo via Giusy Cisale

American Michael Andrew snagged up two #1 seeds on day 2 of the Mare Nostrum meet in Canet. First the 20-year-old collected the top time in the men’s 50m fly, hitting the wall in 23.37 to lead the field by .23

British beast Adam Peaty was also in the pool this morning to wake up the world with a big-time 50m breast outing of 26.87. That’s just under .40 away from the 26.49 Peaty produced for the British title back in April, but here he’s hunted by South American Record holder Felipe Lima.

Lima crushed a new SA Record of 26.33 in Monaco to sit behind Peaty as the 2nd fasts performer of all-time in this event, so look for the pair to get ultra-heated come tonight’s final.

Anther rivalry about to take shape in their 2nd event is a showdown in the women’s 400m free between Hungary’s Ajna Kesely and Argentina’s Delfina Pignatiello. The former got her hand on the wall first in last night’s 800m free battle, but Pignatiello didn’t go down without a fight, registering a new Argentine National Record before all was said and done.

This morning it was Pignatiello leading the field in 4:09.37, while Kesely clocked 4:10.66 to flank the South American. Hungarian Iron Lady Katinka Hosszu will be on Pignatiello’s other side tonight, collecting the 3rd seed in 4:11.63.

Japan’s Daiya Seto staked his claim on the men’s 200m fly event with an easy morning swim of 1:57.67, while France’s Charlotte Bonnet got her hand on the wall first in the women’s 100m free heats with 54.21. That mark sits only .02 ahead of Swede Michelle Coleman , with French swimmer Beryl Gastaldello right behind in 54.40.