Each of the new facilities will have a 50m pool – and one of those facilities, the Indian Trail location, is currently being built and will be finished around September. Stock photo via MSA/Peter Perers

The Mecklenburg Swim Association, located in the greater Charlotte, NC area, has recently announced that they will be expanding to two new locations in the fall of this year.

Earlier in the year, MSA secured over three acres of land to begin construction of a new 50-meter indoor pool in the Indian Trail neighborhood of Southern Charlotte. The new natatorium, totaling 14,000 square-feet in size, will include an area for dry-land exercises, offices for coaches, as well as a waiting area for parents during lessons. The pool will also feature a moveable bulkhead such that the pool can be adjusted accordingly for the appropriate competition seasons.

On top of the already-elite training facility, the new building will also include a smaller pool where they will host swim lessons as part of the MSA swim school. It is estimated that the location will begin fully operating in September of this year. 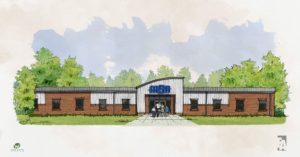 In addition to the new Indian Trail location, MSA will also be hosting practices at a facility in the Moss Creek neighborhood, which is also a part of the greater Charlotte area. The location is home to two pools – a 6-lane 25-yard pool, as well as an 8-lane 50-meter pool.

The inclusion of these two new locations will dramatically increase MSA’s capacity to train more athletes at a higher level – especially with consistent access to long course training. The MSA was founded in 2013 and has since grown immensely in size, boasting a total of five practice and swim lesson locations, including the soon-to-be new facilities.

MSA is a year-round USA Swmiming competitive swim team that trains swimmers of all age groups, offering a plethora of varying practice groups. In addition, the MSA also provides swim lessons for beginners, as well as a Master’s team for adults. The team operates under the direction of head coach Peter Perers.